Having already announced a Los Angeles edition set for next month, Hot Since 82 has revealed plans for TAKEN: New York City on June 20.

TAKEN is the latest event concept from the Leeds-based DJ/producer. For each installment, attendees come together at a pre-arranged rendezvous point before being blinded and placed in the back of a bus, on which they will be transported to a secret location. Once they arrive at the location, they will be treated to a private, all-night rave helmed by Hot Since 82.

TAKEN takes nods from the illegal raves of yesteryear as well as Sleep No More-esque immersive theatre, with previous installments having taken place at Snowbombing Festival and in London. Hot Since 82 spoke of party concept, saying:

“This is one of the most exciting and interesting experiences I’ve had as a DJ! TAKEN is about pushing the boundaries and giving something back to my fans, a bespoke event that’ll be remembered for years to come. It’s also a little nod to the old illegal rave days, where people didn’t know where the party was being held.”

Watch a trailer for TAKEN NYC below. No public tickets will be available for TAKEN, so fans must register at YouWillBeTaken.com/NYC for a chance to snag a spot. 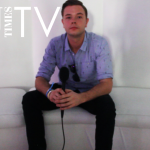