The Brooklyn Mirage, a temporary summer pop-up venue located at 99 Scott Ave in East Williamsburg, opens its doors once again this Saturday, August 1 for the fifth edition of Full Moon Festival, which runs from 3pm until sunrise the following day.

Surrounded by 20 foot walls adorned with tropical vegetation, a banging sound-system, shimmering lights, and beach sand imported from the South of France, The Brooklyn Mirage is a lush urban jungle featuring proper indoor and outdoor stages.

Scaling the palm-tree adorned walls presents party refugees with panoramic views of the party as well as of the Manhattan skyline. Full Moon moved the festival from the previously-announced Governors Island beach to The Brooklyn Mirage because they saw it as “an empty canvas for [them] to inspire, design, and produce a live music experience like nothing [they’ve] done before.”

And that they have. Presented in partnership with artist collective Crew Love, Full Moon Fest boasts an impressive lineup of artists and DJs:

From Carnal’s famous BBQ, selling out every weekend at Brooklyn’s Smorgasburg, to Uma Temakeria’s famous sushi burrito, each vendor will offer signature dishes that pay homage to their regular menus.

Second-tier general admission tickets (21+) are currently on sale here for $70. Grab yours today, before they hit the final tier for $80 and then sell out! 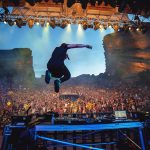 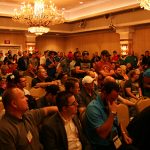