Chandler, Ariz. – It may have been winter in the desert, but thousands of young people showed up for Decadence NYE 2016 wearing only the bare essentials. And lucky for the rave-wear-clad throngs that populated Rawhide Western Town & Event Center in suburban Phoenix this past Dec. 30-31, the deep slate of DJ talent turned up the heat and rang in the New Year with a soundtrack of booming beats.

With hitmaking acts like Disclosure, The Chainsmokers, deadmau5, Green Velvet and Porter Robinson gracing its two stages, Decadence—presented by Relentless Beats and Global Dance—delivered 20 hours of music over two evenings. Of course, DJ Times was there to take all in the festivities. Here are our highlights from the desert:

Day 1: On the opening evening, Sam Feldt played one of the earlier sets and spun some tropical-house remixes of fan favorites like The Chainsmokers’ “Roses” and Calvin Harris’ “Feel So Close”—plus, he really got the house jumpin’ with Galantis’ “Runaway.” For good measure, he even threw in throwback tunes like Tears For Fears’ “Shout” and Marvin Gaye/Tammi Terrell’s “Ain’t No Mountain High Enough.” But the drama peaked when he convinced the entire crowd to sit down, shine their (phone) lights towards him and then jump up when the drop came on his 2015 hit, “Where Are You Now.” A moment, to be sure.

The brothers of Disclosure were up next and opened with a dramatic “When A Fire Starts to Burn,” and delivered crowd-pleasers like “Latch” and “White Noise” from their 2013 breakout album, Settle. At the nearby side stage at the same time, Sean Watson—decked out in a Dirtybird Players T-shirt—got things rocking with a fantastic mix of thumping progressive-house tunes.

Back on the main stage, Tritonal really lit it up with their brightly colored, psychedelic video displays and laser beams piercing the crowd. Vocalist Angel Taylor joined them onstage to perform their 2016 single “Getaway,” and the hits kept coming (“Blackout,” the dubstep remix of “Anchor,” “Broken” feat. Adam Lambert, and “Untouchable”). Of course, the crowd went nutty when they dropped a remix of the White Stripes omnipresent “7 Nation Army”.

Porter Robinson came out clad in a beanie and pogoing, successfully encouraging his horde to do the same. He leaned on the heavier side of things, mixing up bass and trap tunes with some of his better-known tracks like “Language.” But things really got sizzling with an explosion of confetti during the d-n-b breakdown of Ne-Yo’s “She Knows.”

Curiously, deadmau5 was the only artist of the evening who didn’t pick up the mic—a welcome development. Though he battled a noticeable drip onstage—the outdoor rain and indoor condensation created a temporarily soggy situation—he still delivered a strong set. Opening with the slow-building “Imaginary Friends” from his latest full-length, W:/2016ALBUM/, the mau5 got heads bobbing with his signature, droney, tech-house beats and offered up plenty of eye-candy with his pulsing DJ booth.

The night wound up with new EDM darling, Marshmello, taking the stage. (For the record, we saw more white, puffy, cylindrical helmets in the crowd than mau5 masks this time out.) The officially anonymous DJ/producer came on strong with booming, chest-rattling remixes, including his take on Avicii’s “Waiting For Love” and Calvin Harris/Florence Welch’s “Sweet Nothing.”

Day 2: Saturday night got far more bass-heavy than Friday’s musical slate. In fact, there were times when both stages simultaneously pumped out some serious trap remixes and originals alike. Zomboy’s aggro squelchfest “Like a Bitch,” for example, was a popular track in both environments.

On the more tuneful tip, Zedd opened with cinematic entry music leading into his anthemic “Beautiful Now.” (It happened to be the first melodic set of the night after the trap- and dubstep-heavy sounds of Zomboy, Vanic and Jackal.) He dropped a throwback remix of Michael Jackson’s “Thriller,” and got the entire crowd singing along to his booming electro-house remix of Magic!’s pop-reggae hit “Rude.” Not to disappoint, he threw in his own well-loved cuts, “Clarity” and “Spectrum,” and even Daft Punk’s evergreen “One More Time.”

Jackal had an entire sea of kids head-banging in a slow-motion mosh pit, and then blew the doors off with can’t-miss cuts like Nero’s “Promises” and Flux Pavilion’s “I Can’t Stop.” Lotsa crunch over there.

Youthful Russian DJ/producer Arty entertained with a diverse set that included his recent collaboration with Andrew Bayer (the big-room tune “Follow The Light”) and festival faves like Benny Benassi’s electro-groover “Satisfaction.” He even showed some love to Above & Beyond by dropping “A.I.” and his remix of “Sun & Moon”—a decidedly trippy pair of tracks. He, too, got into the trap trend, as he dropped some booming breakdowns between his bouncier EDM tunes.

As midnight approached and the New Year beckoned, the musical environment next door offered groovier flavors with a nu-disco set from Justin Jay. As the ball dropped, he appropriately went old school with Kool & The Gang’s “Celebration” and got the already delirious crowd moving further. He was followed up by more hip-swaying, deep-house grooves from Shiba San. And later, the pair continued to rock the afterhours crowd at “Afterglow” into the wee hours of Day 1, 2017. 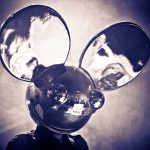 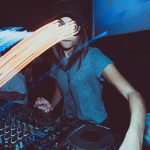 Dark Star: REZZ Is Moving On Up