Belleville, N.J. – In the beginning of his DJ career 17 years ago, Jack Bermeo considered himself just a nightlife/club DJ. He had no experience as an MC.

But boy, has that changed. At this past year’s DJ Expo in Atlantic City, Bermeo—owner of multi-op company LJDJs—won his third “DJ of the Year” competition. Considering that he again impressed a panel of judges that included some of the mobile-entertainment industry’s most-respected/most-successful DJs, that’s no small feat.

Good thing Bermeo realized all those years ago that he lacked essential skills to being a profitable career DJ.

“I had no experience as an MC, lighting technician, dancer, or even in sales,” he says. “I was content and pretty stable, but eventually realized I wanted to tap into things I had never done before.”

First, Bermeo had to overcome an obstacle many share – his fear of public speaking. It was the best decision he made. “I overcame my fear by just doing it,” he recalls. “It felt like an old Kool Aid commercial where I just had to go head-first in order to break that wall holding me back. It took me some time to understand how powerful a voice can be.”

Bermeo next endeavored to create a new business goal and mission statement. “I would continue to create a different type of experience at every event for the guests and the team—whatever the cost is,” he says, noting that he settled on the branding statement, “Redefining life’s celebrations!”

Bermeo says one thing that differentiates his company from the competition is his willingness to explore new ideas, to avoid doing the “cliché wedding.”

The delivery of all formalities, says Bermeo, is the key to executing a different style of event. Less traditional are the additional services Bermeo offers, like a Junk Truck or photo booth, which he feels all companies should offer. “They also help secure some deals with your clients,” he says of the junk trucks, photo/video booths, custom DJ booths, custom LED video wall, CO2 guns and cannons he offers. “They’re excellent options to help build your brand.”

Bermeo projects that these options generate $150k of revenue per year. And when talking about revenue, we asked Bermeo about his biggest expense. “We’ve been asking ourselves, ‘What are the future trends for DJs?’ Well, we didn’t see it, so we decided to start our own trend,” he says. “Our custom crystal-chandelier DJ booth, video-control command center, and multi-functional LED Video Wall represents an investment of $100K.”

He customized the video-command center—with a slide-out coffee machine—in order to connect enough video sources so he can “punch out 4K resolution.” The 8- by-12-foot video wall is set up directly behind the DJ. 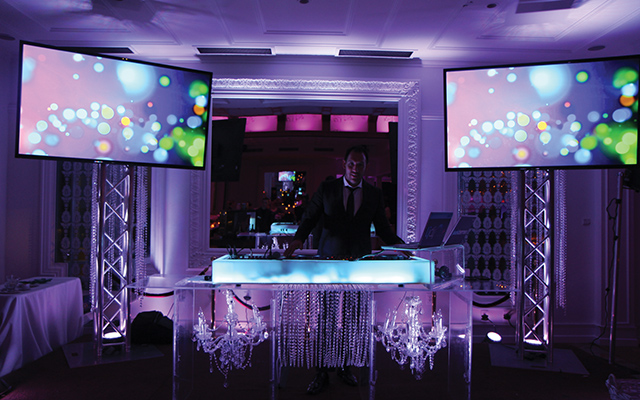 “Some may find it weird, but we look like a fly on the wall,” he says. “We do same-day edits, candid images, and montages never looked better than with this—especially during key moments of the night, such as parent dances or a candle lighting for a Sweet 16. It wasn’t easy to invest in such a big expense, but being different is being the best.”

“As for lighting, we currently own 10 Chauvet Intimidator Wave lights and eight Chauvet DJ Intimidator Spot 455Z IRC units. Also, we are doing some trials on the Aryton DreamPanel Twin lights that are double-sided. One side has 36 LED diodes and the other side is a LED video screen. We feel that these will complement our customized video wall that we carry.”

Bermeo says about 80-percent of his business is derived from a combination of word-of-mouth and guests who attended an event. He credits his ability to paint a picture to prospects of their DJ entertainment as a good way to close them.

“We start by describing the venue the client is having their event at,” he says. “We walk them through the ceremony, cocktail hour and move them right into our duties as a host. Every minute of their day means a lot, so we take our time talking about their day. After all, if your potential client feels comfortable that you know the venue, you’re more than likely going to gain their trust.”

He loves leaving his clients with a feeling of excitement after they sit down with him. “My only words of advice are to remember… it’s like a job interview. Allow your clients to talk without you interrupting. Sometimes the clients just want their vision—no matter how chaotic—to be heard. It’s your job to guide and plan with them so they are in great hands with you.”

Over time, like all DJs, Bermeo’s been through the good and the bad. The Good: In 2009, he was tapped by the Trump organization and has since hosted many events. The Bad: A client once asked Bermeo to welcome her guests. It was beyond scope, but he agreed. As he paced back and forth thinking of what to say, the client grabbed him and, with an angry look on her face, said “Don’t do that, it looks like you don’t give a damn about my party!”

Bermeo says he’s been scarred ever since. “I share this experience with my team because, to us, we are not doing anything wrong, but to the guests, on the other hand, it’s a totally different view.”

Through it all, though, he gives most credit to one person: His wife Sophia. “She has been there for me since the first win,” he says. “The amount of time that we’ve put into LJDJ’s branding and style was due to her. She’s allowed me to work religiously 24/7 at the office, because she knows how important it is to give attention to our clients and staff. As she puts it, ‘You’re married to your business.’ I’m so thankful for her because she understands my passion and determination.” 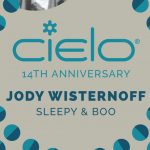 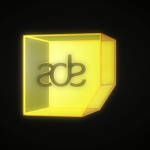