This story first appeared in the Winter 2017 issue of ClubWorld. Read the full issue here and subscribe for a free print subscription here.

It’s no secret that New York clubbers are a finicky bunch. With a single gust of the wind, one neighborhood is unequivocally “out” and another has taken its place in the ever-sprinting zeitgeist of the city that never sleeps.

We’re not guiltless here in the ClubWorld office, either. Seriously, just two years ago we were proclaiming that Williamsburg was the be-all, end-all “New” Manhattan.

That being said, it seems as though there is a new haunt in Brooklyn for the weary night owls looking for an untainted scene to which to migrate, and its name is Analog BKNY.

Nestled away amongst the industrial playhouses of Gowanus, Analog BKNY is one of the city’s newest champion of the dance underground, directly catering to the veteran clubbers who want to take the focus back to the music. Far and away from the riffraff of Williamsburg and the VIP-dominated super clubs of Manhattan, the club is a stunning ode to the magic that turned New York into the nightlife kingdom that it’s known as today.

Before delving into what Analog BKNY is now, it’s worth exploring a succinct summation of the history that has led to its present. Weekend heroes who have been around the past few years may faintly remember Sankeys Brooklyn: the Manchester institution’s second attempt at a New York installation (opened shortly after the Midtown version shuttered). The Brooklyn edition set up shop at the former SRB venue but didn’t fare much better, closing after just a month of activity.

After lying dormant for the better part of a year and a half, the space’s interior was revitalized completely and rebranded to Analog BKNY this past spring. Originally intended as a special events space hosting one-off events, the venue reinvented itself once again at the beginning of summer and transitioned into a more traditional nightclub setup boasting multiple bookings each weekend.

It’s been a long journey, but Analog BKNY has settled into an identity that was well worth the effort. Revelers will first realize just how different the club is from other offerings when they arrive, where they’ll be greeted by a deceptively nondescript exterior. However, behind those brown bricks lies a perfect club experience.

Upon entering, visitors will be greeted by a straightforward rectangular layout that puts the all of the focus where it belongs: the dancefloor. Flanked on both sides with a pair of bars (that serve beer on tap!) and lying under a color-changing light grid and a stunning disco ball capable of rising and falling, the floor recalls the early black-box nightclubs of New York’s yesteryear. For those who want to get an up-close-and-personal view of the jock rocking the decks, there’s a stairway behind the stage that leads to a balcony that overlooks the DJ where you can escape the crowds to view the booth and take in a panoramic scene of dancefloor. 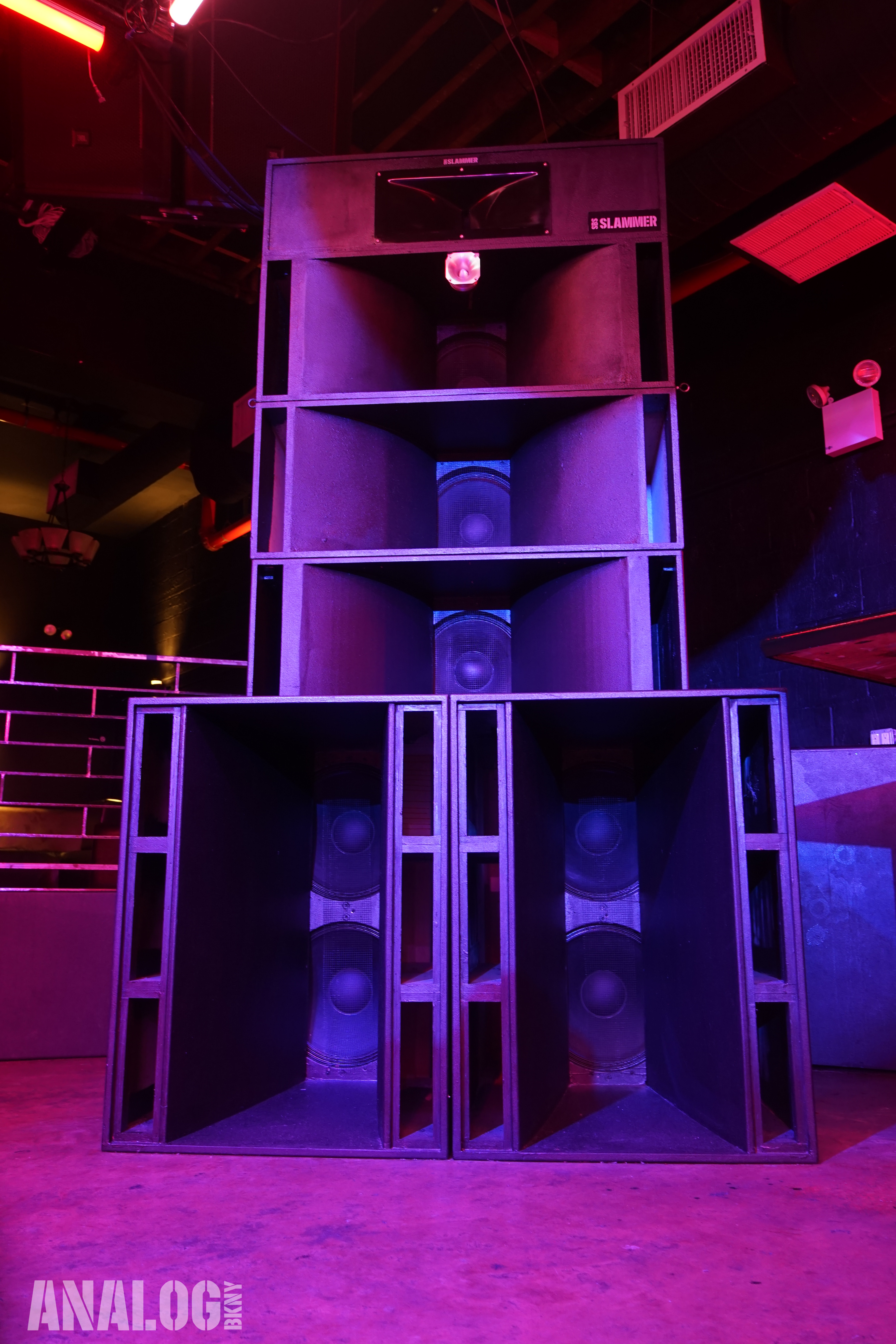 It’s easy to see why Analog evokes a spirit that hearkens back to that classic NYC house feeling, as the two people behind it are veterans of the city’s nightlife. Owners Michael Bruno and Craig “Shorty” Bernabeu have a long history in the scene, dating back to the days of New York’s legendary clubs Twilo and Sound Factory.

Patrons of legendary Manhattan nightclub Twilo or Montreal’s revered Club Stereo are already acquainted with the work of Bernabeu, the man behind Analog BKNY’s stellar sound system. In keeping with the club’s intimate vibes, its sound design features a bespoke system that Bernabeu built entirely from scratch.
Bernabeu’s signature SBS Slammer loudspeakers can be seen throughout the room, most prominently as part of the four sexy speaker stacks over which patrons are sure to drool. The end result is one of the purest sound experiences in the city, which—given Analog’s competition—is no small feat. Devoid of limiters and compressors, the system boasts custom one-of-a-kind amplifiers as well as a design that ensures crystal clear sound no matter where you stand in the 5,000-square-foot club.

It’s worth noting just how clear the sound is. Bernabeu shirks the ongoing trend in nightlife design to put all focus on crafting a bone-rattling low-end, instead creating a balanced sound profile that accurately replicates the way records were meant to be heard. Even during the party’s peak-hour, you’ll have no problem holding a conversation with someone standing next to you—a perfect setup to connect with a fellow raver or find your next fling.

Believe us, though, even if you can hear the person next to you, this system can still crank, making the club’s placement in the midst of an industrial park without an absolute blessing. 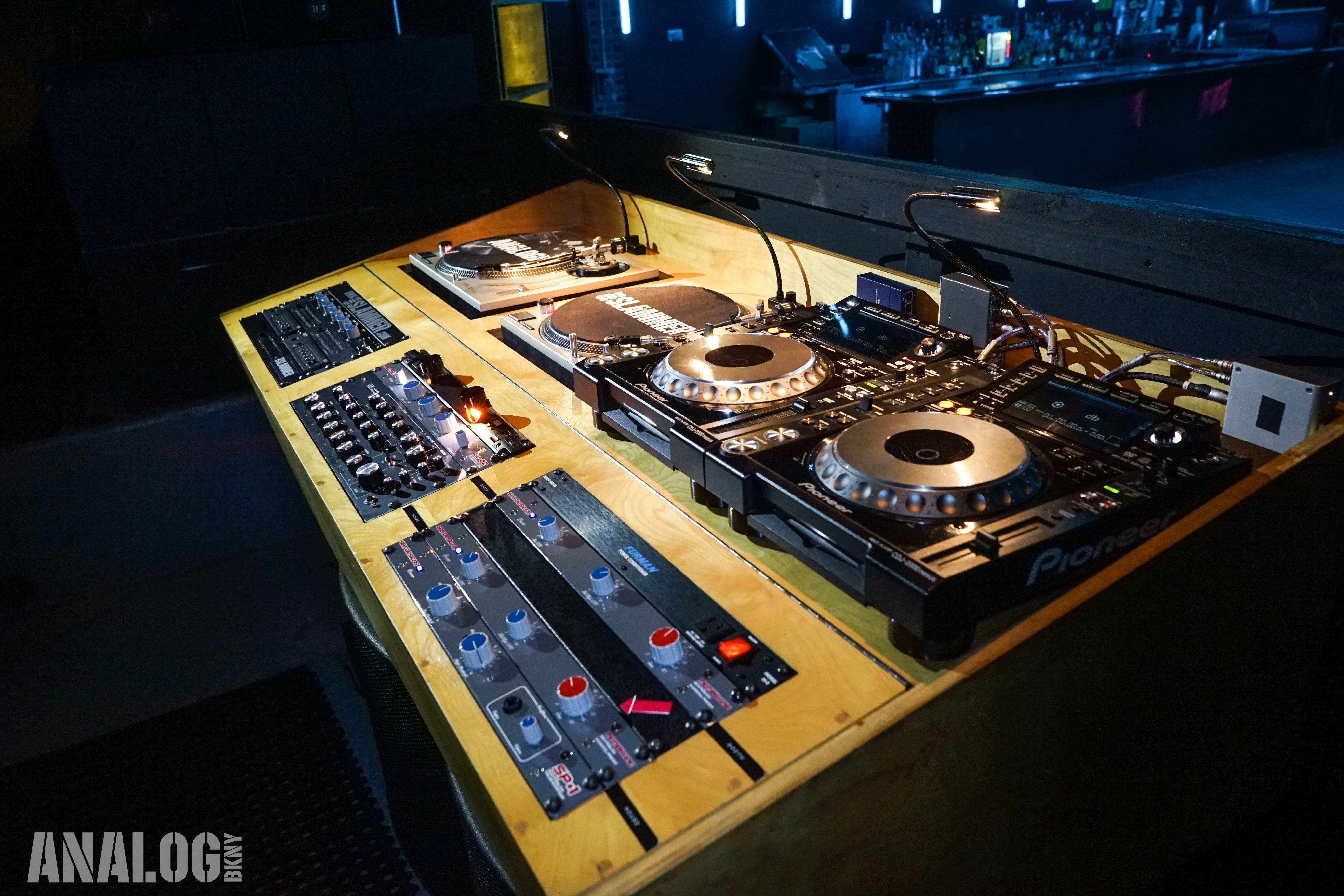 Despite the old-school house influences that permeate through Analog BKNY’s ethos, don’t be fooled into thinking the club is in any way stuck in the past when it comes to the acts it’s bringing in. Heavyweight club stalwarts like David Morales, Tony Humphries, and Jellybean Benitez have all taken to the decks of the club to sing its praises, but there’s no “one sound” that defines Analog. Some of the most successful nights at the club have been thrown by local techno crew Wrecked, which has brought patrons down to Gowanus and created lines around the block to get in. Other booking highlights run the gamut from Chicago’s The Black Madonna to garage maestro DJ EZ. Essentially, if there’s something you want to hear on that killer SBS Slammer system, there is definitely a place for them behind the decks of 177 2nd Avenue.

And just like there’s a place for music of all styles on Analog’s record platters, there’s a place for each and every music fan that is need of one. Whether you’ve spotting packs of furry otters dancing shirtless to the blazing techno of Mike Servito or breaking it down with veterans of New York house’s heyday at Frankie Bones’ 50th birthday celebration, Analog BKNY is open to all who choose to go looking for it. 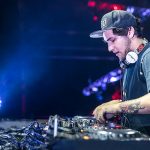 JAUZ: From The Deep 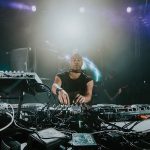