The hills of Pennsylvania will be alive with the sound of techno this August, as the initial details of Honcho Summer Campout’s third installment have been announced.

As announced on Facebook earlier today, Honcho Summer Campout 2017 will take place August 17-22 in its new home of Artemis, PA’s Four Quarters Farm. The Pittsburgh-based queer DJ collective and party cites the male-only rule of its former location Roseland Campground as the reason for the fest’s shift to a new home, with the intent to be more inclusive of all queer persons in its sights.

Kicking off its inaugural installment in 2015, the festival is organized by queer DJ collective Honcho, who run the similarly named party at Pittsburgh’s Hot Mass monthly. Last year’s event featured sets from the Honcho crew—founders Aaron Clark, Clark Price, and George d’Adhemar—members of Honey Soundsystem, and more, with a focus on the queer spectrum of techno, house, and everything in between.

Ticketing and lineup details are set to be announced in the coming weeks. For more information in the meantime, head to Honcho’s Facebook and read our coverage of last year’s event here. 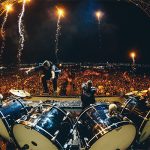 The Big Stage: Galantis Gears Up for Another Massive Festival Season