Yes, “Revenge of the Nerds” may be a cult-film classic from the ’80s, but it’s a title that’s also quite fitting when telling the tale of Alison Wonderland, one of Australia’s up-and-coming DJ/producers.

Before entering the world of electronic dance music, the Sydney native (aka Alex Sholler) trained as a classical musician, with cello as her main instrument. Combining her classical roots with her open love for “Star Wars” and Harry Potter, Alison radiates an unabashed geekdom that stands in contrast to much of the rock-star attitude we see from so many in today’s scene. Obviously, her career has been conducted on her terms.

Her early years saw her DJing at any venue that would book her (including strip clubs). But she masterfully used that time to hone her skills with a pair of Pioneer CDJs before the 2013 release of her crunky, debut single, “Get Ready.” Then, in 2014, the blossoming talent released the Calm Down EP, which featured her hit single, “I Want U,” and the game changed.

While these were all tremendous strides for her career, it was the following year when we saw Alison Wonderland flip the electronic community upside down with her breakthrough debut album, Run, where she fully showcased her prowess as a writer, vocalist, and producer. Big club tours and festival dates ensued with fans eating up her brand of melodic trap and bass.

Fast-forward to late 2016, she released “Messiah,” a buzzy collaboration with Grammy-winning producer M-Phazes, and now she’s begun hosting her own radio show (“Radio Wonderland”) on SiriusXM’s Electric Area. These days, as one might expect, she’s has been spending most of her time working follow-up to Run, so we recently sat down with Alison to get the inside scoop on her anticipated follow-up, upcoming tour and more.

DJ Times: First off, congrats on Radio Wonderland. How does it feel to be hosting your own radio show?
Alison Wonderland: Thank you! Honestly, it’s insane. When I was really young, instead of doing my homework, I’d sit and curate my own little radio station in my room. [laughs] It’s something I’ve wanted to do forever. Being able to choose music that I love and curate something weekly featuring all my friends is just so cool. It’s a great opportunity to show people what I’m digging at the moment and expose some really great music to the world.

DJ Times: Do you feel like there is more of a responsibility to be more of a tastemaker now that you have your own radio show compared to your traditional DJ sets?
Alison Wonderland: No, they each have their own role equally. Playing a show is another way of curating the music you love while showcasing it on more of a personal avenue. DJing is my instrument; it’s my love and passion, so I feel like this show is just another branch off of that.

DJ Times: You’ve recently had some time off to work on your follow-up to Run. Would you say there is pressure to deliver after your debut album being so successful?
Alison Wonderland: Oh yes! Wow, I was literally just thinking about tweeting, “The second album is way more difficult than the first” right before I spoke with you. [laughs]

DJ Times: Would you say you’re overthinking things the second time around?
Alison Wonderland: Not really, I think I just stress myself out a lot because I’m somewhat of a perfectionist. I feel like a lot more people have their eye are on me compared to last time.

DJ Times: Speaking of album number two, what would you say is your inspiration behind this one?
Alison Wonderland: This album serves as a time capsule for a certain period of time in my life. I feel like when you think too much about the music, the genuine side of it doesn’t really come out. Everything you hear, the vocals, the melody and everything was how I was feeling on that day at that moment in time, no preconceived ideas.

DJ Times: What can we expect?
Alison Wonderland: I’m definitely including more of my classical background in this album. I’m still singing on the songs that I’ve written and still collaborating with a few friends of mine. I’ve written this album with Joel Little, who did Lorde’s album, and one of my best friends, Lido. It’s just been a collaboration of people I love, and that’s really important to me. When it is released, I want people to feel something, so I want the message I’m trying to convey in each song to be communicated the right way. That’s where I’m headed with it.

DJ Times: Your vocal work has always been your strong suit; will there ever be a time where we see Alison Wonderland featured on more records?
Alison Wonderland: To be honest, I’ve been buried working on this album that I haven’t spoken to anyone about it, but I’m always down as long as I’m digging the track.

DJ Times: So you’re always open to it?
Alison Wonderland: Yeah! I’ll always be open to collaborating with anyone I have good chemistry with. When I started out producing alone in my bedroom, I began to realize that it’s never a bad thing to work with others and collaborate. I mean, this album is a collaboration, I’m working with Joel Little and Lido on it. I don’t understand why people tend to hide that fact because a collaboration pushes you as an artist to be better than you were before.

DJ Times: How so?
Alison Wonderland: When working on music together, whether full collaboration or a simple feature, you’re in the studio – and I don’t want to use the term “flexing” – but you want to be the best representation of yourself as an artist during the process.

DJ Times: You mentioned that when you started producing that you were doing it on your own, is that why you are always so open to producers remixing your tracks and making stems available to anyone?
Alison Wonderland: Yeah! When I started out, I would have died receiving stems from someone. I remember asking around and never receiving a reply. The internet is a great place for producers to commute with artists that they like, and it gives me a format to communicate with everyone. I think it’s important to respect all up-and-coming producers making music from their bedroom because you don’t know what they can come up with so why not give them the proper resources they need and see.

DJ Times: Speaking of producing, do you prefer working on music on the road or would you rather be secluded?
Alison Wonderland: When I’m out touring, it’s a whole different side of my personality; I’m more open, compared to when I want to work on music. I rather be locked away focusing on what’s going on in my head and not worrying about anything else. It takes me a few days to warm up to writing, so I prefer to be stationary then trying to juggle the two.

DJ Times: What program are you using to produce these days?
Alison Wonderland: I’ve always used Ableton Live. I think it is very straight-forward and is the most user-friendly program, in my opinion. It’s also colorful, making it very easy to look at visually. That’s kind of important when you’re staring that the same screen for hours on end. [laughs]

DJ Times: One of the most talked about sets of EDC Las Vegas was your back-to-back with Diplo and Jauz. How did that come about?
Alison Wonderland: I literally have no idea. Pasquale [Rotella, founder of EDC promoter Insomniac Events,] is a genius and came up with it! He asked if I had any interest and I jumped all over it. I was so excited because we all play different genres. Luckily, being a DJ for so long, I can mix pretty much any genre. I’m open to incorporate almost anything.

DJ Times: What else can we expect from Alison Wonderland in the near future?
Alison Wonderland: More tour dates, a bunch of crazy tweets and, of course… an album. [laughs] 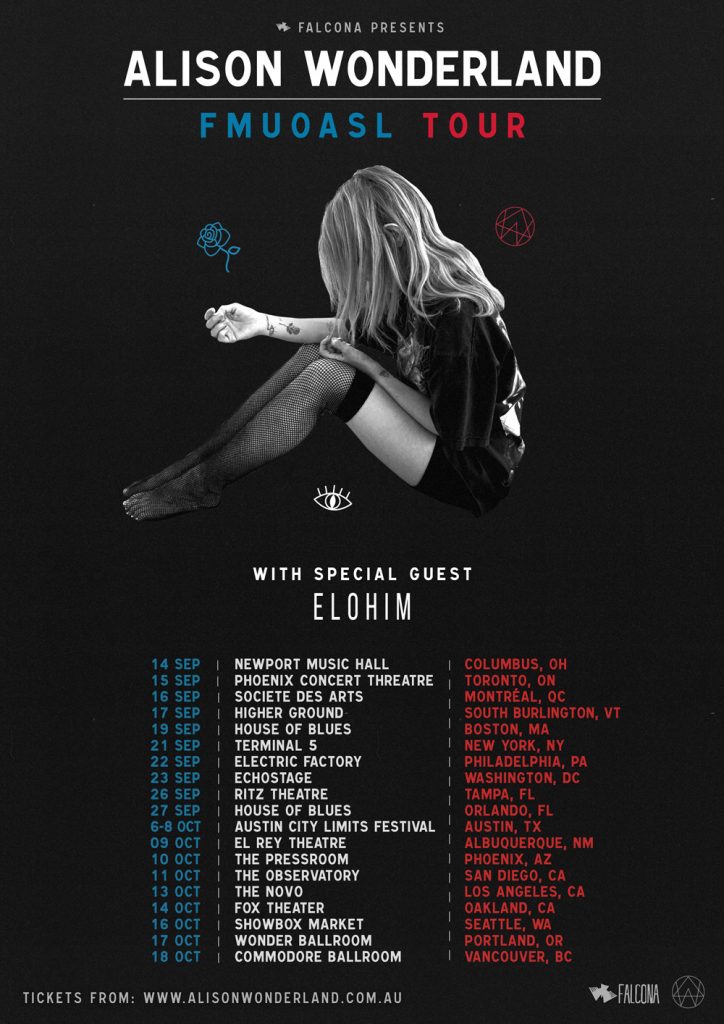