And as I write this particular review, it’s been a year since I took a look at Denon DJ’s incredible MCX8000 DJ controller (you can read that review in the archives at djtimes.com). One of the things that struck me about the MCX8000 is the level of technical sophistication built into the product, evidenced by the big, dual LCD screens and the on-board software that drives those displays, as well as the rest of the capabilities that permit the MCX8000 to be used standalone.

It seems clear that inMusic is developing some serious in-house expertise in the realm of embedded software, the sort of software that’s at the very heart of technology products like the MCX8000 — as well as the subject of this review, the SC5000 Prime media player. Seemingly built on the knowledge gained from the MCX8000, not to mention some of the innovative gear from sister inMusic DJ brand Numark, Denon DJ is plowing new territory with this new media player offering.

Introduced this past January at the Winter NAMM Show in Anaheim, Calif., the SC5000 is part of Denon DJ’s new Prime Series, which also includes the X1800 Prime mixer, and the VL12 Prime turntable — both of which are the subject of future reviews for this magazine. The SC5000 is serious gear, for serious DJs, and that was strongly in evidence during the demo I witnessed in the inMusic suite at NAMM. I couldn’t wait to get my hands on one, and with production ramping up, I finally have had a chance to play with a pair of them, along with the X1800 Prime mixer. I’ve come away even more impressed than I was from the demo at NAMM. (I’ll cover the X1800 Prime specifically in an upcoming issue.) 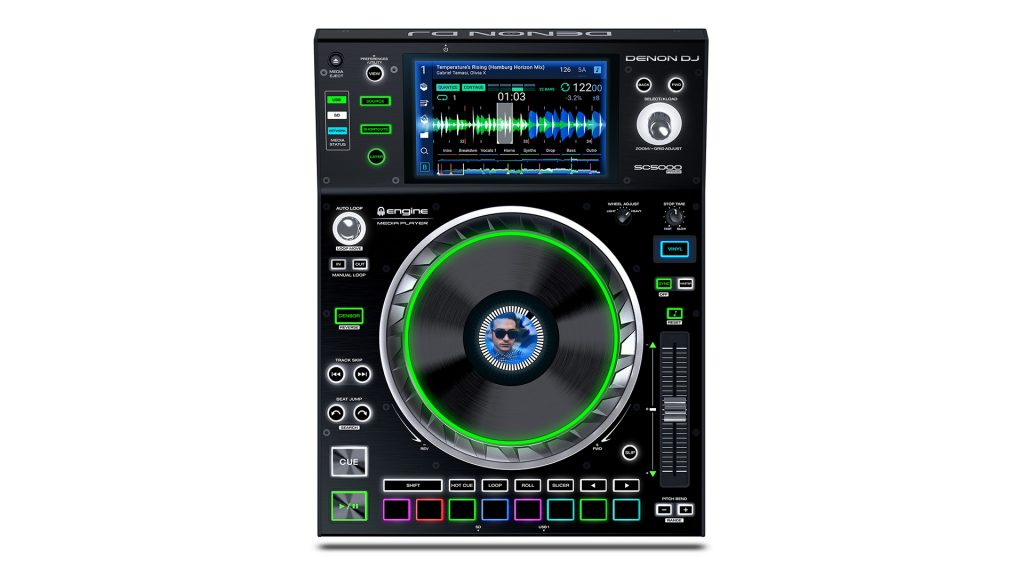 Set-up & Use: For the most part, set-up and use consists of unboxing the units and connecting them to your mixer of choice. One of the things you notice first at this point is the physical evidence of one of the SC5000 Prime’s primary features: dual-layer support. What that means is that a single SC5000 can act like two separate decks rolled into one, playing back two sources at the same time on a single unit. So when connecting the deck to the mixer, all the outputs are duplicated, corresponding to the A and B “layers” of the deck. If you intend to use only one layer, you need only connect one, but you’d missing out on some serious flexibility.

As noted above, I did review the units alongside the X1800 Prime mixer. While I don’t want to venture too far into the X1800, there are certain benefits to using one with your SC5000 decks. One of them is auto-configuration of the layers; just connect both layers’ outputs to the X1800 using the method of choice (digital RCA, one connector per layer, is the obvious option), connect a standard Ethernet cable between the two, and on playback, you’ll see a color-coded match-up between the two channels on the mixer, and the two on the deck, so you can easily know which layer is going where. Multiplied by two SC5000s, of course, and you have all four layers of material properly and easily connected. With an X1800, you also get an “on-air” indication on the outer ring(s) of the deck(s) to indicate when the channel is open on the mixer. Finally, tempo information is transmitted all around, allowing a pair of SC5000 decks to beat-sync with one another, and the mixer itself. Nice touches all around, and without the X1800, you get some of the functionality (like cross-deck beat-syncing) just by connecting a pair of SC5000 decks directly via Ethernet cable.

Each SC5000 provides incredible connectivity; there are no less than three USB ports on the device – one in front, two in back – allowing you to connect all sorts of media sources, including hard drives, thumb drives, etc. There’s also an SD card port on the front for a fourth source of material. And with a pair of SC5000 decks networked together (directly connected, or through an X1800 in between), you can share all the sources in both directions. Ejecting a source that’s not in use is easy but failsafe, so swapping material — or swapping DJs — is a simple affair, too.
It may be worth noting for users of digital scratch (DVS) systems that, among the SC5000’s many capabilities, it is not playing physical CD or DVD media — it’s purely for digital material on USB or SD media. Denon DJ has done a great job of supporting both drive and media types. For drives, they can be formatted in all the major file system formats; the Windows-derived FAT32 file system is preferred.

I’ll note, too, that the music file formats supported run the gamut, including lossless formats, and include AAC, AIF, FLAC, MP3, Ogg Vorbis and WAV among others. With the unit’s digital-output capabilities, the SC5000 is ready-made for high-resolution output situations where quality matters.

One of the SC5000’s key features is on-board music analysis. While Denon DJ does provide a new version of their Engine software, logically called Engine Prime, the choice is yours as to whether you pre-analyze your music from a computer with the software, or just let the deck do the work on-demand. The on-device analysis includes BPM, beat grid set-up, and even key identification, and the results are saved to the device alongside the music for quick start-up on subsequent track plays. Of course, using Engine Prime from your Windows or Mac computer has certain advantages, but the on-device option is nice to have, powerful, effective, and certainly a nice advantage to the SC5000 Prime.

When I reviewed the MCX8000 last year, I noted how much I loved the displays, but thought they sort of begged to be touch screens. Well, Denon DJ must have had the same thought, because on the SC5000, the beautiful color displays are multi-touch-enabled. They look incredible; Denon DJ’s specs don’t include a mention of the display’s resolution, but with a 7-inch diagonal measurement, they’re large, bright, responsive, and incredibly crisp and clear. The embedded software expertise I referred to earlier extends to the aesthetic design of the user interface of the screens as well; everything from the choice of font, to color, visual design, how they allocated the space on the screen — every aspect reflects deliberate thought. In the smartphone era where companies like Apple set a very high bar for user experience, Denon DJ has risen to the challenge of creating something modern, intuitive and easy to use. Even without reading a single word of the manual, it was obvious what to do, how to navigate and access things, go back, and so on. Even adjusting beat grids when the analysis might be a couple of beats off seemed natural.

The fullness of the user interface extends to the ability to customize the behavior of the SC5000 right from the unit. Press and hold a certain button on the unit, and the Utility and Preferences screens pop-up. Don’t like the default color choices for the layers? Pick new ones. (They’re reflected on the X1800, too, if you use one.) Many other attributes can be set as desired, from BPM range to what style of key notation is used on the analysis and displays. (I love that it supports the popular Camelot notation I’m used to, among its various choices.)
All the aesthetics and technical tricks aside, at the end of the day, a media player needs to do an effective job of… well, playing media. I’m happy to report that the SC5000 does that quite well, too. The placement of controls is logical, and familiar to any DJ who’s spent time with CDJs or media players of practically any brand. I felt immediately at home, and immediately productive. With the two players connected to the X1800, and the mixer connected to some speakers, I powered everything on and was successfully performing a set quite literally within minutes.
The enormous rotary encoder (jog wheel) in the middle of the unit was most striking when I started to perform. It stands away from the surface of the unit roughly an inch, making it easy to accurately control transport alignment from the edge of the wheel without accidentally scratching when I didn’t want to.

Along the bottom edge of the SC5000, one finds an array of buttons much more commonly seen on digital DJ controllers, especially those popular with Serato users: There are buttons to choose hot cue, loop, roll, and slicer functions, along with eight companion buttons. It allows easy, on-deck setting of cue points, setting or performance of loop points and lengths, triggering loop rolls, and slicing 8-beat loops for interesting performance effects.

In preparing this review, I have logged dozens of hours with the two SC5000s I was provided for analysis, taking them through their paces, trying to, metaphorically speaking, find any visible cracks in the handsome façade. If they exist, they’re eluding me. On the contrary, this pair of SC5000s performed flawlessly, and even seemed to take a relatively slow USB thumb drive in stride, allowing me to play material from it from both decks at the same time without a single burp or issue of any kind. (Of course, higher-quality, faster media is recommended for serious performance use.)

Conclusions: If Denon DJ was trying to create a superbly impressive, incredibly flexible, and intensely fun media player for the DJ market — one with great engineering and an industry-leading feature set — all I can say is that they have been wildly successful. I did not find a single thing that felt lacking to me; on the contrary, the SC5000 Prime is pretty much the DJ media player of my dreams, delivering unparalleled on-board capabilities that perform well, are responsive, intuitive and simply enjoyable to use. With a street price in the general neighborhood of $1,900 a pop, they are clearly an investment, and intended for serious users. But what you get for that investment reflects the fact that Denon DJ has set a high and lust-worthy new bar for products in this space.