Atlantic City, N.J. – In nearly a decade of writing for this magazine, I’ve somehow managed to repeatedly miss the premier annual event for DJs of all stripes: DJ Expo, produced since 1990 by DJ Times and its publisher Testa Communications.

The stars (schedule-wise) simply hadn’t aligned (before now, anyway) to enable me to break loose and trek from my Denver home to Atlantic City to join the fun. But having just returned to the Rocky Mountains from the East Coast, I wanted to take a few moments to collect some general thoughts and reactions to the show, which ran this past Aug. 14-17 at the Atlantic City Convention Center.

First, I had a chance to be in the audience for many of the educational sessions and, as I’d heard, they provided a broad-based range of topics as varied as DJs themselves. From Mike Walter’s incredible tour of modern-music history tailored to the unique needs of the mobile DJ to vendor-sponsored presentations like Chauvet DJ’s eye-opening demo of the new SoundSwitch technology, there was quite literally something for everyone.

But one of the highlights of DJ Expo is the vendor floor, which opened midday on the Day 2 of the conference. You won’t find such a wide array of vendors of DJ gear of all types assembled in one place, anywhere else — at least not in a place open to people other than just the trade and press (like the Winter NAMM Show, for example). This year, several of the exhibitors used DJ Expo to unveil new-to-market products. Between those new introductions and all the recent gear already in-market, as one of the resident “gear guys” here at the magazine, you’ll not be surprised to hear that wandering the show floor was one of the best parts of the show, in my view. Controllers, mixers, lighting, sound support, cases, music pools and much, much more were all on display. And in cooperation with retail partners, much of the gear was available for sale, right from the show floor — something many jocks particularly look forward to.

So, in my one day of visiting the exhibit hall, what stood out for me personally? Well, a number of things:

Several months back, I reviewed the innovative and unusual Roland DJ-808 controller. The company’s first foray into the DJ market, the unit blends a Roland drum machine with a Serato-focused controller and some vocal effects to create something that interoperates with other types of gear, as I outlined in my review (December 2016 issue).

Capitalizing on the acceptance of the DJ-808, the company rolled out at the show the new DJ-505 and DJ-202 controllers. While the 505 will be the subject of a review soon, these two controllers address both the mid- and low-end of the markets with a Roland controller solution and tailored feature sets for those markets. It’s great to see some new thinking and innovation in our space, and it’s exciting to see Roland “rolling” along those lines.

Rane holds a special place in the hearts and minds of many a DJ, and there seemed to be some trepidation among some DJs when inMusic Brands (parent company of Denon DJ and Numark, among many others) brought Rane under its corporate umbrella a little over a year ago. Basically, those concerns were put to rest when Rane announced at DJ Expo the new Rane Seventy-Two mixer, and Rane Twelve digital turntable.

The mixer integrates a beautiful color touchscreen and other innovative design thinking, while the Twelve is tonearm-less turntable specifically for scratch (DVS) DJ workflows. With a direct-drive motor and even real, 12-inch vinyl on a real platter, it provides a completely authentic vinyl control experience — just without the tonearm. Very cool.

Chauvet DJ had already announced its partnership with New Zealand-based SoundSwitch, but DJ Expo was the first time I’ve seen an actual demonstration of the device and its software, and I was, simply put, blown away. Based on the audience reactions, I wasn’t the only one.

SoundSwitch makes it as easy as possible to design and program DMX-based light shows. But, the cool part? It’s fully integrated with and beat-synced to Serato, making for an incredibly powerful platform and workflow for getting the most out of your lighting set-up — and keeping audiences wowed. The company did announce that Virtual DJ support is coming soon; good news for the many mobile (and other) DJs who prefer VDJ.

Also not new at DJ Expo, but still recent in-market, Denon DJ was showing off its Prime Series. Consisting of the X1800 mixer, SC5000 media player, and VL12 turntable, these innovative offerings are the gear pieces of choice for preeminent global DJ/producer Laidback Luke (who also dropped into DJ Expo for a meet-and-greet with attendees before his keynote address). And as my reviews of these products in recent issues of DJ Times have suggested, I was (and remain) quite impressed. Judging by the reaction from attendees at the Denon DJ booth, again, I wasn’t the only one.

Other Notable Debuts: Although I didn’t get a close-up experience of every new product, I did see that Electro-Voice introduced its Evolve 50 portable column loudspeaker system. The active system includes a 12-inch sub with eight 3.5-inch array drivers. Connected via pole, the system features Bluetooth audio, wireless control/monitoring via mobile app, and DSP.

The Demo Rooms: In these private environments away from the showfloor, four pro-audio companies demoed their latest wares. Pioneer Professional Audio debuted two new entries to its XPRS Series of active loudspeakers – a 10-inch speaker and a 15-inch subwoofer. QSC Audio cranked its K.2 Series of powered speakers (including the K10.2, K12.2 and K8.2 models), which was released earlier in the year.

BASSBOSS delivered some hair-raising experiences with its DV12 active, full-range, invertible-array loudspeaker and its DJ21S subwoofer. Avante Audio demoed its Achromic Series of powered speakers, which included 10-, 12- and 15-inch, two-way models, plus 15- and 18-inch subwoofers.

I might have been a first timer for DJ Expo 2017, but it’s certainly not the last time I’ll be heading to AC to join in. In fact, I’ve already blocked out next August on my calendar in anticipation of the announcement of the actual dates, and I would encourage you to do likewise. I now understand why people have said (and now I agree) that it’s truly a “can’t-miss” event for all DJs. 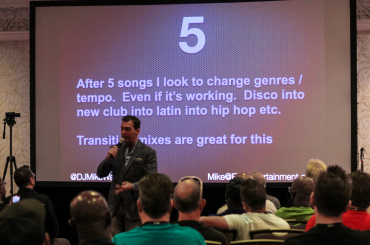