There has certainly been no shortage of studio albums released throughout 2017 with the Grammy-nominated hit-maker Robin Schulz to be the latest added to the list.

Featuring his hit singles “OK” with James Blunt and “Shed A Light” with David Guetta and Cheat Codes, the German producer’s 18-track album Uncovered proves to be his most cinematic and complete work to date.

Proving to be a true musician with his instrumental work and trademark manual guitar riffs being a staple throughout, his long-awaited Uncovered is just another prime example as to why he is one of the most highly touted artists in the realm of electronic music. 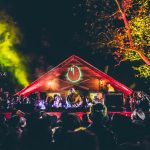 NGHTMRE Drops Lead Single “On The Run” From His Forthcoming EP