As a DJ, Kayper accomplished plenty at an early age.

Bred on the hip-hop flavors of South London (artists like London Posse, Rodney P, and Black Twang) and pirate radio stations (with DJs like Tim Westwood), she acquired a youthful fascination with the genre and the art of spinning.

She began playing in public at 12-years old. At 16, the London-born turntablist held a residency at the legendary Ministry of Sound club. Then, at 20, she won the 2003 Vestax Juice DJ competition.

Turning to the studio, Kayper earned notice with a series of club-leaning cuts on Mad Decent, Spinnin’ Deep and Eton Messy, including the 2013 hit, “Out My Mind,” which exceeded 2 million Spotify streams. Her most recent EP, “Sweet Reminder,” offers smooth grooves that recall the heady days of U.K. garage.

Currently, the NYC-based Kayper—aka Kaajal Bakrania, 34—keeps a busy tour schedule, which includes regular gigs at San Francisco’s Love + Propaganda and Chicago’s Studio Paris. She was also a finalist in A-Trak’s Goldie Awards DJ Battle, held this past September in Brooklyn. As she prepped for another round of shows, we recently caught up with Kayper.

DJ Times: When did you begin to take DJing seriously?

Kayper: I moved to Cambridge in 2002, which is where I went to university. This was the point where making a name as a DJ became more of a reality because I was away from home and my family, who did not approve of me DJing at the time. When I moved, I had the freedom of being able to do shows wherever I wanted, and was finally able to start building my career as a DJ.

DJ Times: Has relocating to New York made any profound changes for you?

Kayper: Yes, I think it has given me more hunger to succeed. North America is a big place, which means there is a lot more competition. To stay relevant, you must stay on top of your game and always think 10 steps ahead. I think I’ve always had this mentality, but living in the U.S. certainly keeps me on my toes.

DJ Times: I see that you use two Technics decks and a Pioneer DJM-S9 mixer. What’s your mixing process?

DJ Times: Do you practice your sets?

Kayper: I don’t practice my sets, but I do have little routines that I know work. I practice the routines and I have “go-to” crates set up in my Serato, but I never have a solid plan for what I’m going to play or in what order – I just go with what feels right at the time.

DJ Times: Do you always know where you want to mix in on a track?

Kayper: Not really – I usually wing it. Even if I end up playing two tracks together that I’ve mixed before, I always mix the track in depending on the vibe of the crowd and how they are reacting to it.

DJ Times: How do you prepare for a show?

Kayper: I like to research music that is relevant to the city I’m in, or I spend a few hours downloading different edits or mashups. Then, I usually put a rough playlist together in Serato. I’ll decide on what I’m going to play from the playlist when I see the crowd.

Kayper: Many years ago, I DJed in Ibiza for the first time and one of the gigs was in an abandoned townhouse that looked like it was about to collapse. I was asked to climb up a ladder to get to the front balcony where they had set up turntables and someone had to bring my records up the ladder for me on their shoulder. I played to a massive crowd of people in the town center with circus acts and guys on stilts.

Kayper: Logic Pro X connected to Avid Mbox audio interface and Yamaha HS8 monitors. I use a few analog hardware synths for pads and basslines, like the [Alesis] Andromeda A6 and Roland GAIA [SH-01]. I sometimes program drums using the [Native Instruments] Maschine 2 or the Roland TR-8, depending on what vibe I’m going for. But, I mostly use the EXS24 sampler in Logic and a bunch of different plugins. I especially like the Arturia VSTs because they sound the closest to the real analog synths that I like.

DJ Times: How did DJing inform your studio work?

Kayper: Being a DJ first has helped me to be a better producer. The benefits I got was that I understood how song structure works, what DJs look out for in a track and what works on a dancefloor. That’s really something you cannot learn unless you have had the experience of performing live.

Kayper: I usually start a track by playing around with ideas for different chords first. Once I have that down, I’ll work on the beat and, from there, I’ll put together some sort of rough structure and add pads, melodies, and the bassline depending on what vibe I’m getting. So, I guess it’s more of an experimental process for me.

DJ Times: You’ve referred to yourself as an open-format DJ, that you’ll play any style depending on the crowd…

Kayper: I feel like I’m more conscious of my brand now more than ever. I used to just go with the flow and not really think about what I represented. The first record I released was a house record, which was confusing for people that had followed me as a DJ, because, I guess, everyone expected me to make hip hop. However, I wanted to make a point. I don’t like to follow rules and I hate being pigeonholed. I consider myself as an open-format DJ because there are no boundaries for me. 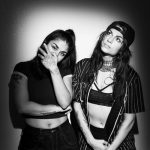 Krewella Joins Forces With R3HAB For “Ain’t That Why”