Larry Heard has been on the music scene for over 30 years, but you don’t get a lot of nostalgia talk from him.

The legendary DJ/producer, who’s also billed as Mr. Fingers and Fingers Inc., is one of the originators of house music, but he doesn’t drop phrases like “back in the day” or “we used to” into conversation. So, discussing his seminal work during Chicago’s nascent house-music scene isn’t always so easy.

Despite a plethora of timeless and successful releases, not the least of which are the club classics “Mystery of Love,” “Washing Machine,” and “Can You Feel It,” the ego-free Heard modestly downplays his impact on the existence of house music.

“Where a lot of Chicago guys were intentionally trying to be DJs,” he says, “I was coming from a different musical background, playing drums in jazz bands and progressive bands and R&B bands. It was a hustle, but when something didn’t work out, I went right on to the next thing. My instinct was to get away as soon as possible. I didn’t dwell on it and get stuck. I wanted to move forward.”

In 2011, Heard announced he would discontinue touring due to hearing problems. But to the delight of house-music fans worldwide, he returned with a live show in 2016. And even more thrilling, this year he releases a Mr. Fingers album, Cerebral Hemispheres, on his Alleviated Records imprint.

The 18-track Cerebral Hemispheres—what would have been considered a hefty double album in physical-music-product times—is packed with rich grooves. Heard’s live music roots are felt in the warm and rhythmic flow. Piano tinkles through the soothing lounge movements of “City Streets” and a lazy saxophone blows through perfumed vibes of “Urban Sunset.” Sophistication is the central theme of Cerebral Hemispheres, which provides high-brow hotel lobby sounds on “Tiger Lounge” and the soft soul of “Crying Over You,” vocalized by Heard himself. The breadth of Cerebral Hemispheres allows Heard to explore further afield with the urgent movements of the percussive, tech-y “Electron” and the acid-driven “Inner Acid” and “Outer Acid.”

Heard’s studio is wholly in the box with two computers – one Mac and one PC. The former runs Reason 10.0d72 and Cubase 6.0.7 and the latter runs Sonar 7 Producer 7.0.2. The only physical pieces he uses are bass guitar, acoustic guitar and percussion instruments. Everything else that he has from the early days, he’s desperately trying to get rid of.

“They’re cool to look at, but they’re not cool to carry around,” he says. “I still play with my hands. I was never able to catch on to step programming. It’s easier for me to play and let the computer record me. All the stuff the computer remembers helps me a whole lot. I definitely do not have an eidetic memory. I don’t really have a memory at all. I move through things, but I’m not deliberately trying to remember because I immediately go on to the next thing.”

Heard grew up listening to Bob James, George Duke, Gino Vannelli, Stevie Wonder and Patrice Rushen, all great musicians who have a certain warmth to their sound. He cites them as the source of his gravitation to similar tones.

“I tend to use a lot of atmospheric sounds, Fender Rhodes and piano, which is standard,” Says Heard. “It’s not anything unusually visionary, but I approach it like a rhythm section – that’s my roots. The experimental stuff, that’s where I can just have fun and do kooky experiments and go crazy patching things into each other and making one thing trigger another to create weird textures and percolations.”

The Larry Heard live show sees him on a MacBook Pro, M-Audio Oxygen 61 controller, Mackie 1642VLZ4 mixer, Hohner Instructor32 melodica and Sennheiser e835 microphone. Mr. White, the vocalist from “The Sun Can’t Compare,” joins Heard on stage to help with singing, MCing and crowd interaction, while Heard refers to copious musical notes. They also take a VJ and custom visuals for their backdrop.

Looking back on his music-making career, Heard doesn’t seem to have many regrets. But he does believe younger producers should avoid imitation and create their own creative paths.

“I’m a low-key guy,” says Heard. “I’m not into running around, being in everybody’s faces. Sometimes it doesn’t turn out the way you thought it was going to. I had friends who thought the world was going to change for them, that radio stations were going to start playing house music. Some ended up in severe depression, on suicide watch. We tried to tell them, ‘You’re trying to change the world, just make a good song first.’

“Now I see everyone trying to imitate the past instead of trying to have their own fresh experience. Everybody is doing these old-school Chicago-sounding tracks. That’s been done for 40 years. You want a fresh approach, not something that feels like movies and TV shows you can feel your way through, because you can tell what’s coming. It’s boring after a while if you already know what’s going to happen. There’s no real reason to get excited.”

Springing Forward: Not All Outdoor Events Are Created Equal 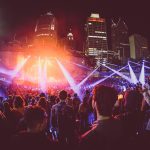