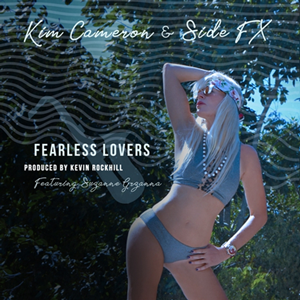 These tracks are for the exclusive promotional use of professional DJ Subscribers to DJ Times and are NOT to be shared under ANY circumstances. Please do not forward them or post them elsewhere.
Your opinion matters the Record Company. Comments may be left at the link above and they will be sent directly to the label. To offer feedback, reply to this email or leave it on the site.
More about the artist:

“Fearless Lovers” is her latest and certainly one of her strongest releases to date with mixes by Bimbo Jones and Dark Intensity. Her music has made the Mediabase charts 10 times, and been, showcased on Comcast Xfinity programming, and has millions of YouTube views.

Playing off the lyrical content of ‘Fearless Lovers,’ Kim uses today’s politically-charged topics (right to bear arms and workplace romance) in her newest music video with a bit of tongue-in-cheek, using silver glitter rifles and an Art Director who cannot seem to keep his hands to himself. Filmed in Miami Beach, Fl, the video features dancers from Washington, DC and Moldavia. Award winner Dave McMahon was the director, with Isis Masoud as the Choreographer, whose background includes “Dance Fever” and “So You Think You can Dance.” Prior to the official release of Fearless Lovers, this song is already generating noise.