After a number of mysterious billboards began surfacing in New York City and Paris, there was serious speculation that one of France’s finest producers was making a comeback. Well, Columbia Records has announced that it has signed Gesaffelstein which mean the techno titan has officially returned to the world of electronic music.

There has been no word on what the next move for Gesaffelstein is next but it’s safe to assume 2019 will be his official return. Stay tuned! 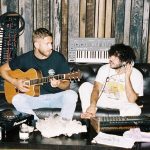 Calvin Harris & Benny Blanco Partner For “I Found You”