In an age of endless digital channels (and the accompanying digital noise), the concept of iconography in entertainment is seemingly a relic of the past. Visuals as instantly identifiable as a sequin glove or a Union Jack dress are fewer and far between in 2018’s music landscape, with the digital noise inundating music fans making it impossible for that sort of post-verbal communication. However, that hasn’t stopped the DJs of the world from trying by strapping everything from marshmallows to mice to their heads.

On the more palatable end of this spectrum lies the spectral shimmer of Claptone, whose gold visage and Pinocchio-after-a-couple-lies nose are sure to be recognizable to anyone who’s found themselves at one of his festival sets (or seen “Eyes Wide Shut”). In his case – or “their case,” if you are one who believes there are two of them – Claptone’s masked-magician illusion is a just a small part of the allure, as the Claptone brand of vocal-focused deep house is simply dripping with magic.

Taking elements of indie-pop (including some notable vocalists of the genre) and synthesizing them with a deep house aesthetic, the Berlin–based DJ/producer act has carved out a unique style. Despite the purposeful attempt be shrouded with an air of mystery to the public, Claptone’s music is filled with a distinctly human touch. The instrumentation is decidedly organic, often shying away from big synths and drops in favor of dreamy grooves, and bluesy touches. The end result is uniquely enthralling: a timeless nostalgia with an undercurrent of melancholy.

We channeled––er––caught up with Claptone to chat about his latest album Fantast, The Masquerade event series, and the difficulties of making a personal connection with fans when you don’t have an identity.

DJ Times: When did work on the album officially begin?
Claptone: Work on the album began around three years ago when Charmer, my first album, just dropped. There were so many ideas that I couldn’t see through in time so I compiled a folder of layouts.

DJ Times: Why a second album?
Claptone: When revisiting early ideas and themes, some concepts reoccurred and seemed to impose themselves on me. I had to follow this lead. To give you an example, there were two early songs/layouts that later did not make it on the album – “Into The Wild” and “Mountain and Lake.” Those set the tone, introduced the nature theme to me when played back to back and gave me a vision for the whole album, which imagery and motifs I would like to have, how it should feel. This arch could be showing me a path to my soul. But it collided so heavily with the harsh political realities that I had my doubts from time to time. Further down the line, I bypassed my doubts. 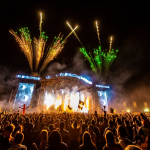 HARD Summer Announces 2019 Return to The Speedway in Fontana 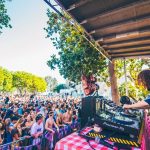