Already popping up on the DJ Times radar to later be featured in December’s On-Deck Circle, 13 has followed up his blistering audio assault that is “Uppercut” with his debut EP, Old World Order.

Calling the electronic powerhouse Mad Decent its home, the rising Candian talent hits listeners with two unreleased weapons delivering a forward-thinking brand of relentless bass music into the mix, unlike anything we’ve seen in as of late and that is probably because this body of work exclusively with analog synthesizers and gear including a Moog Sub 37. 13 is the real deal.

Continuing to ride this momentum, the masked mastermind will be making appearances at Beyond Wonderland SoCal and the just-announced Get Lucky festival in Salt Lake City.

See what all the 13 hype is about below. 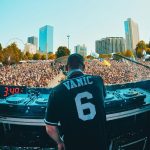 Vanic Returns With New Original, “Good On Me”