From AKG, a Harman brand known for creating reliable microphones for a variety of professional applications, comes the DMS100 and DMS300 – all-new entries into the world of wireless.

Not just for mobile-DJ/entertainers, AKG’s DMS range is aimed at live-sound performers, presenters, meeting spaces and anyone looking for an easy-to-use wireless microphone solution. The DMS range comes in two flavors: the DMS100 and the more-capable DMS300. Each ships with either a wireless handheld microphone or a wireless body pack. The body pack can be connected to an AKG clip-on or headset microphone as well as electric/acoustic guitars, basses and more. Most DJs purchasing the DMS system, I’m sure, will opt for the microphone.

Both offer high-resolution 24-bit/48kHz audio quality and global license-free operation on the 2.4GHz wireless space. Perhaps not too important to many DJs, but the microphone features advanced AES 256-bit encryption for secure or confidential communications.

The all-black microphone body is made of plastic and, while that might not sound great on paper, it certainly felt like it could withstand frequent use. Even though it was hard plastic, it felt ergonomic and didn’t feel slippery. I would, however, hesitate before allowing users to satisfy their urge to “mic drop.”

There is a small screen on the DMS300 microphone, which provides connection status and battery level. There is a single button midway down the microphone that controls whether or not the microphone is on, muted, or live. I would’ve liked to have seen an on-off switch, as the sliding motion from off-to-on and vice versa feels really natural when using a handheld microphone. Regardless, the mic has a decent weight to it, and it never felt too heavy or unwieldy.

The microphone requires 2 AA batteries (included), and they can be installed by unscrewing the base of the microphone and installing them in a handy battery cradle. AKG quotes 12 hours of use per pair of batteries for both the DMS100 and DMS300, and I found that to be a reasonable estimate. It will be interesting to see if those figures might change in very hot or cold outdoor environments or with great distances between the receiver and the microphone. It should also be noted that the microphone head is conical and covered in a black metallic mesh.

The receiver is also made of plastic and is remarkably lightweight, which will make transporting the unit a breeze for mobile DJs. There is a simple black-and-white screen on the front, which can display the connection status of the input, the battery level of the input, and the level of the input. The back of the receiver has a balanced XLR jack and an unbalanced TRS jack to send a signal to a mixer or PA system.

Between the two output connections, there is a switch that allows the user to switch the output level from mic-level to line-level. There are two RJ12 sync ports, which facilitates the linking of simultaneous DMS300 devices. At the far right, there is a 9V power connection. Personally, I would’ve preferred a slightly longer power cable, but a short power cord can easily be solved with our best friends: extension cords. Also, the DMS300 receiver has two antennas on the front, one at each side. 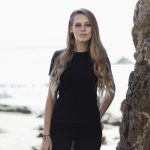 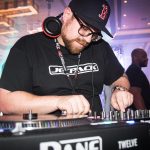