Australian-born/L.A.-based DJ/producer Wax Motif (Danny Chien) broke the electronic seal and kicked the Saturday-evening party into high gear by dropping a grooving combo of night bass, including the killer, house-tinged “Your Beauty” by Fisher, his remix of AC Slater & Chris Lorenzo’s “Fly Kicks,” and his own “Make It Rain,” as well as a hybrid of hip-hop cuts like the James Hype VIP mix of “Sicko Mode” by Travis Scott feat. Drake and the Holy Goof remix of Drake’s “God’s Plan.” He even kicked out classic jams like “Show Me Love” by Steve Angello & Laidback Luke (feat. Robin S) and “One More Time” by Daft Punk. Delightful.

Another awesome Aussie What So Not (aka Emoh Instead aka Christopher John Emerson) shined a brightly colored set-up and invited the crowd to hoist the ladies up on sets of strong shoulders – to which, many definitely obliged. His set was sprinkled with many of his own tracks like “7 Dollar Bill,” “Beautiful” feat. Winona Oak, “Jaguar” and his collab with RL Grime, “Tell Me.” He also dropped Sheck Wes’ hardcore rap ditty “Mo Bamba,” which stirred up the crowd plenty.

Next up was Whethan (aka Ethan Snorek), 20-year-old DJ/producer who’s already been at it for four years and went on tour with The Chainsmokers – and this all before graduating high school. He kept the crowd moving with a couple Skrillex-based tracks (“Midnight Hour” with Boys Noize & Ty Dolla $ign” and “Mumbai Power” feat. Beam) and mixed up genres and BPMs with Phoenix’s alt-rock anthem “1901” and a smooth Flume remix of Disclosure’s “You & Me.” Tight.

This year’s DUSK headliners – Kaskade and Rezz – were top-notch. Rezz, a 24-year-old Canadian DJ/producer (aka Isabelle Rezazadeh) known for her “hypno-swirl” glasses, intricate build-ups and heavy drops, served up a tough set of her rough-and-ready tracks (including “Spider on the Moon,” “Stress” and “Relax”), as well as some otherworldly, tripped-out cuts (Champagne Drip’s “Oni” and Meso’s “Tokyo” feat. Towers). As always, she was mesmerizing.

Clearly a fest-favorite, seasoned veteran Kaskade (aka Ryan Raddon) thrilled the hyped-up crowd with his own collection of killer hits. He dropped a mixture of vocals (“Disarm You” feat. Ilsey and “Room for Happiness” feat. Sklar Grey), electro-house (“Fun” with AC Slater and Phlegmatic Dogs and “Come On” with Mr. Tape, and some more melodic material (“We Don’t Stop”). His appeal crossed all genres and age groups, as young kids could be seen dancing, enjoying themselves along with the crazy, big kids – a great way to end a wonderful evening at DUSK. 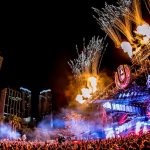 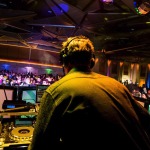 Understand This Misconception About Millennials and Increase Your DJing IQ