Share
Share on Facebook Share on Twitter
Earning respect as a DJ in Detroit is no easy feat. In the land of techno snobs where everyone’s an expert and posers never prosper, DJs must stay true to their roots and never sell out.
ADMN (aka Alexander Drazin) – network engineer by day, DJ/producer by night – has spent years earning his stripes in the techno mecca. He’s been on the grind since 2009, making techno-leaning tunes, like his latest scorcher, “Machine 8,” or the occasional deep-house joint, like the recent genre hit, “Sanctuary,” a collab with Oliver Dollar featuring Mr. V.

In early 2019, ADMN raised his game by formally becoming a resident DJ at legendary local haunt, TV Lounge. Then, in December 2019, he earned a new level of recognition – Paxahau booked him for mainstage at Movement Electronic Music Festival in Hart Plaza for that upcoming May.

Of course, three months later, the pandemic hit and, by Memorial Day weekend, Movement ’20 had become an online, live-streaming event (#MovementAtHome). But it’s been that kind of year – anyone who expected a big 2020 was in for an even bigger surprise.

Undeterred by the downturn in developments, ADMN has maintained his studio and streaming hustles, so DJ Times caught up with him to get the scoop on his progress and his process.

DJ Times: How have you been spending the pandemic?

ADMN: A lot like everybody else, concerned and unsure about what’s going to happen. Trying to stay in shape. Keeping a positive outlook and burying myself in music.

DJ Times: Have you had any gains during the pandemic?

ADMN: Biggest gains, being a part of Movement Detroit Music Festival At Home live-stream. Even though I was really bummed not to be in Hart Plaza with my music family, I still got to open the mainstage playing in front of a virtual crowd over the Internet. On Twitch alone, during my set, there was 23,000 viewers. It really ended up being a blessing in disguise – the outreach was unbelievable. I’m thankful for Paxahau including me in the stream. They took the entire festival, executed it beautifully on a platform that is new to everyone. It was really cool to be able to go back and watch the video and see the chat and how people reacted during my set. In real-time, of course, you gauge it by the dancefloor.

DJ Times: Have you had any setbacks during the pandemic?

DJ Times: Speaking of records, why do you choose to release on vinyl?

ADMN: I release in digital and vinyl. There’s something visceral about holding a piece of music in your hand, that digital doesn’t really give you. There’s pros and cons of both – not everybody plays vinyl. I really like the prospect of being able to have tangible art.

ADMN: I like all of my electronics, of course. I use Elektron Analog RYTM [drum machine/sampler], Elektron Octarack [sampler] and Elektron Digitone [synth]. I really like the Dave Smith Instruments Pro 2 [synth] – that thing is a beast. I use the [DSI] Prophet 8 [synth] quite a bit – that’s a piece that I don’t think I’ll ever part with. I really like the Behringer gear… they have been putting out some really awesome pieces that are hard to ignore. I have the Behringer RD-8 Rhythm Designer [drum machine] and I’m waiting on the Poly D polyphonic analog synth – it’s taking forever to get to me. I’m sure that’s largely to do with the pandemic.

ADMN: I use Ableton Live in the studio. For my interface, it’s either the Antelope Orion 32+ or the Apollo Twin Duo, depending on the project. For plug-ins, I use Slate Digital, FabFilter, Waves Bundle, various Universal Audio plug-ins, Native Instruments Suite, and Rob Papen plug-ins. Other hardware includes a Midas Venice 320 analog mixing board, ADAM Audio A77X monitors with an ADAM Audio Sub8 active subwoofer, Elektron Analog Four synth, and Eventide H9 MAX multi-effects unit.

DJ Times: Any tips, tricks or tools for success in the studio?

ADMN: Learn how to mix your own tracks. Understand frequency ranges and how frequencies interact with the speaker. Understand frequencies from different parts – you have your bass and lead and your drums. It’s important to understand how each element of a track interacts with each other. It’s important to be able to get something that pops out of a speaker that’s loud without much effort.

DJ Times: You’re working on an album, right? What’s the vibe? What can we expect?

ADMN: I’d say, given the climate, listening is hugely important. I mean, there’s going to be club bangers in there – stuff that’s meant for the dancefloor – but I also want to expand and include some things for sitting in your living room and relaxing. I’m just kind of letting things roll out as they come out of me and figuring out how to make them cohesive.

DJ Times: How do you continue to be productive in the studio?

ADMN: I take 30 days at a time. I will spend a minimum of 15 minutes in the studio, starting something new each day. I think people underestimate the power of a little bit of consistency.

DJ Times: What do you feel is most important for a DJ to be successful?

ADMN: It’s one-part work, one-part consistency, one-part building a team. You can’t be an island in this industry. 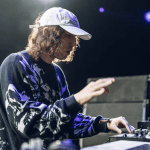 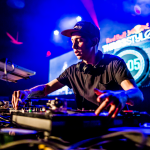