Now that things are quickly getting back to “normal” after a chaotic 14 months and everyone is looking to make up for lost time this summer, it’s only right that Teddy Beats becomes a staple in your party playlist for the coming months. Already riding quite the hot streak when it comes to releases in 2021 with his latest being “Alive” featuring Britt Lari, this Baltimore-based talent has seemed to found his niche engineering tropical house hits with some serious pop appeal. Think of his discography as the audio equivalent of a sunkissed, poolside paradise.

Looking to dominate summer 2021 with a lengthy release and tour schedule, we took the time to chat with Teddy Beats to get to know him a little better in addition to getting the inside scoop when it came to the production of his new single. Check out our chat below!

When were you first introduced to electronic dance music and when did you decide to start producing?

I’ve been making music most of my life but only got into dance music a few years ago, probably around 2017. I had a friend from Moldova that was big into dance music and always had Sirius XM Chill or BPM playing in his car on our way to buy weed (shhh) and I instantly fell in love with it. I started experimenting with the genre and ended up releasing my first dance song, “Ain’t Stoppin” on Armada Music that same year. Crazy!

You’re a Baltimore native, has the city had any influence on your music?

I’m actually a DC native that recently moved to Baltimore but it’s already had an amazing influence on my music. People here are so supportive of the arts and it hypes me up like none other, which I think comes across in my newer songs. I remember taking my turntables out of the moving truck when we were moving in and getting an applause from my neighbors who were excited to have another musician on the block. When does that ever happen?? [laughs]

When you were getting started, which artists influenced or inspired you most?

I was really inspired by my mentor, Chucky Thompson (producer for Bad Boy Records), who signed me to a production deal back in the day when I was making hip-hop beats. He taught me a lot about music and the music business. I’ve also always been a fan of Max Martin. I love to study his music and analyze everything he does when I’m listening to it. He’s still a big inspiration behind my music to this day, especially on my heavier pop-leaning tracks. On the dance music side, I was super inspired by Kygo, Lost Frequencies and Sam Feldt.

What was one piece of equipment that helped define your sound early on?

I had an old Roland MC-808 Groovebox I used a lot in my earlier music. The synth sounds were pretty dated by that time but I loved the drum sounds it had. I felt like they gave my tracks a little extra umph compared to MIDI drums. It didn’t have any sampling capabilities though, so after I used every sound a million times I ended up selling it (I’m horrible, I know). Other notable pieces of equipment I used early on were an Akai MPC 1000 and an E-MU Systems Mo’Phatt.

What does your studio setup look like these days?

Just the basics! I’m a true believer that the gear doesn’t make the artist. I use a Macbook laptop, an Apollo Twin interface, a midi keyboard, JBL studio monitors and a Neumann TLM 103 microphone. I used to be way more into outboard gear back in the day but I traded it all in for plugins. I still have love for outboard gear but I was tired of all the patching. Plugins are way more convenient. Easier to travel with too!

What’s your creative process in the studio?

Step one: smoke a doobie. JK! (kinda) I always start with chords (almost always a piano) unless I have a topline, then I’ll start with the vocals instead. I’ve tried starting other ways but nothing talks to me the way chords and vocals do. They have so much emotion in them that I feel like they guide me through the rest of the song. Once I have those in place, I add a first layer of drums, followed by a bass line and then the drop melody. Then I go back and change sounds, layer everything, add some ear candy and mix it down.

Tell us a little bit about how your new track “Alive” featuring Britt Lari came together.

Britt and I have done some chill ass songs together in the past, she sang on my track “All of Me” and I remixed her song “Homebound” from her BIMINI project, so we wanted to shake things up and show off our wild side by coming alive on this fierce, summery, slap house-inspired track while still maintaining my signature chill dance sound.

What does Teddy Beats have in store for 2021 and beyond?

I’m really looking forward to the second half of 2021, I have a lot of exciting things on the horizon including tons of new music, and awesome new merch featuring some of my own artwork. I’m also gearing up for the return of live music. I kicked off show season last weekend opening for Zedd at Echostage in Washington, DC for their grand reopening and already have a few more big shows in the books that I’m pumped to announce soon. 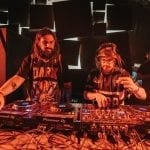 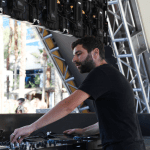