Today is the big day, the Seattle-based LEViT∆TE has finally unveiled his highly-anticipated audiovisual Legacy album for all the world to enjoy!

Making his presence felt throughout the electronic scene with his versatility as a producer drawing influence from dubstep, drum & bass, turntablism, hip-hop, and left-field bass music to create his signature futuristic sound, his newest body of work truly brings his music to life with each track being accompanied by a masterfully crafted visual counterpart.

Inviting listeners on a true music journey from the moment they hit play, LEViT∆TE has taken the time to deliver an in-depth track-by-track breakdown of his groundbreaking new album.

Check out his exclusive breakdown of Legacy below and enjoy the ride!

“This song features vocals by my talented friend Kody Ryan, as well as a guitar performance by another good friend Joza. I recruited Kody for this part because of his unique voice and overall singing ability. He has an amazing and soulful baritone as well as a breathy falsetto which I really love, and needed for the vocal pad of the intro of this song.

I started this song sometime in 2017 and it was written about the passing of my father. This was one of the first songs I had personally sung on and at the time, I didn’t feel it did justice to the subject matter, but upon revisiting it and re-working on it, I was happy with the outcome.

Pertaining to the storyline of the album, it sets a much needed tone for the intro of the story at hand, acting as a preemptive perspective of what is to come. The calm before chaos in this scenario. During this song, our protagonists, Mesics (an old man) Max (a nine year old boy) and Percy (an AI security unit) drive off deep into uninhabited central U.S.”

“This song enters the technical side of production on the album, and being that it is so soon into the album foreshadows the timbres and types of sound design that appear throughout. In the process of writing this song, it was extremely important to retain cinematic songwriting, and not overuse technical production.

When you break down the notes being used within sound design, they still play phrases and melodies that apply to the mood of this scene. At this point in our story, the group arrives at a remote location, and unpacks their belongings into an abandoned farmhouse. In the context of the song, Percy goes into the forest and clears the forest of any insurgency of the story’s protagonist, who in this case is known as “The Harbinger.””

“This song for me represents songwriting and production when “no one is looking” perse. It is the kind of song that reflects where my creative process goes, when there is no ego, and no semblance of using technique to try to wow myself or the listener. For me, it is pure songwriting that reflects my own inner monologue, and what I find to be emotionally satisfying.

In context of the story, this song is introduced by a skit in the previous song, where Max asks Percy “do you miss mom and dad.” This leads into what would be a retrospect on the how and why of Percy’s existence. The visuals were done in an animation/ manga style look to represent a look into the past. The song covers the concept of the first prototypes and creation of what would be Mesics passion project.”

“The production on this song is reflective of previous songs I have written. Inspired by arrangements and sound design from the artists Noisia and Former, I am not unaware of the similarities to their work. But at the risk of that reality, it felt too important for me to not write this because of the context of the story. I committed to this while truly, truly doing my best to make this piece unique and true to my own sound.

This song represents the reveal of the final build of Percy, whose product identifier is PRTCTRv1.1.1. The visual showing her first moment of AI consciousness and the moment where “life” is breathed into her.”

“Originally this was written as an introduction to the song “For Your Life” but was pushed into its current place on the album to elaborate and extend the storyline at that point. It is a song that sets a tone of eery complacency. I wrote it to convey a feeling of time passing slowly, with an undertone of looming despair.

In context of the story, this is when the dust settles, when they find themselves in a mind-numbing routine at their location. But somewhere in the distance there is oncoming danger.”

“This song is the kind that is extremely fun for me to write. The subject matter was based on very personal things, not so personal it was painful to write, but personal enough I had more lyrics/ ideas than I needed. Production wise, it is the kind of song that fits a happy medium between electronic music, and “just music,” where there wasn’t a need to flex technical ability, but still enough space to have fun and get creative.

As per the story, this song applies to Mesics losing his mind trying to successfully synthesize a composite to combat The Harbinger, for that is his main objective, and the sole reason he finds himself settled in at this hideout.”

“Of course all of these songs are fun to write, this one for a much different reason than the others. This is the technical song, this song is about complexity. The goal of this song was to sound inhuman. I wanted it to sound completely unrelatable to the human condition, and not in a pretentious sense.

That was the exact goal with this song, I wanted the listener to hear it and think, “no, this is too much” whether or not I achieved that, I don’t know. But I was certainly satisfied with it when I was done. This song sirens the oncoming of our stories antagonist. This symbolizes the fact that a mass quantity of The Harbinger is on the way to completely destroy our protagonists and everything they have worked for.”

“This song was one I’ve had in my head for a long time prior to making it. Years even. It comes from a subtle respect for juke music, deconstructed club, and broken techno but I wanted to incorporate my spin on it. This groove has been something that makes perfect sense in my head, but damn it was hard to actually sequence in the DAW. Given the context of the album I knew this would be the perfect time to use this groove, I needed something fast, and jittery, that felt like you were always trying to catch up.

At this point in the story Mesics and Max are running through the woods for their life, while Percy is acting as a bodyguard against The Harbinger. She has to burn down mass quantities of the forest behind them to keep our antagonist at bay and combat the threat at hand. This is a fight scene for Percy, but this is a chase scene for Mesics and Max.”

“The inspiration from this song comes from a series called “interface” by the artist U M A M I. The way the music is presented in that series, and the context it is used is something I really wanted to tap into when trying to draw a feeling. I wanted this song to feel cinematic, and tragic, but represent the feeling of something greater than yourself.

This song went through about 6 different versions before I was content, all of them trash besides the final haha. In the story, this is the scene where it is clear Percy has been “killed” and Mesics and Max are left alone in the woods, all of their belongings destroyed. Percy has cleared the area of The Harbinger, but the damage is irrevocable.”

“This is another song that was written about very personal subject matter. There was something in my life happening that called for a very concise exact feeling to be expressed if I wanted to use it for writing music. This song is about moving on. Not to be cliche, but it’s about saying goodbye and accepting that, sometimes shit is just sad.

There’s nothing we can do about it. There’s no mental bandaid we can slap on it with fake optimism, sometimes things are just sad. But out of that acceptance comes liberation and understanding you can move on, and wake up feeling better tomorrow. Furthermore, you can move on and better yourself, shit, the best day of your life probably hasn’t even happened yet.

That’s what this song is about. Things might feel truly miserable sometimes, even enough to think you might not be able to get back up, but for me I do everything I can to lean into those moments and look them square in the face for what they are. I’m not some sort of fucking guru, or psychiatrist, but through the shit i’ve been through in my life, that’s what works. And that’s what this song is actually about.

Similar to the actual subject matter of the song, this is how I chose to close this album and close this story. Mesics and Max find themselves in a seemingly hopeless situation, but they carry on because, what other option do they have.” 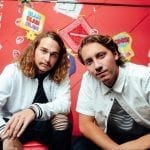 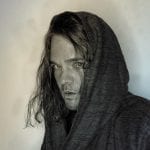