With the release of the Pioneer DJ DJM-S11, the DJ community was given a great hybrid unit that sits between the analog and digital camps. The S11 pairs perfectly with Serato DJ Pro and rekordbox use, and brings so many features that it just begs for you to bust out the turntables, a crate of records and get to mixing.

Coming in at a little over 11 pounds, this scratch mixer is easy to transport and even easier to set up. With the included two-USB hub on the back, you can easily plug in your Pioneer CDJs, Rane Twelves, or any other device to control your music and start playing extremely quickly.

There are a handful of new features that make this mixer different from its predecessors, and I think a few of these are game-changers that make creative DJing-on-the-fly that much easier, while inspiring you to do even more with the new hardware.

For all of my Serato DJ friends, this will be the one for you… Let’s start by highlighting the most obvious new addition – the fantastic 4.3-inch, customizable, touch display. After plugging it into Serato and dropping in a few tracks, I found that you can see the majority of everything you would ever need while mixing or loading new tracks on just the LCD screen of the mixer itself.

Crucially, with the unit’s browsing knobs and load/instant doubles buttons on the left and right of the screen, you can do so much without even glancing at the computer. The track names (in whatever crate or folder you are browsing) are up on the mixer’s screen and you can scroll until you find the one that you need. It shows the key, BPM, track names, and more, so you can get all the necessary information.

Digging deeper, you find the Touch MIDI feature, and that is a special one to be talked about. You get access to four pages of presets that you can trigger on the fly to change things up during your performances, and these presets can be custom MIDI-mapped, giving you full control to cater to whatever needs you have at that time. You could create settings for battling, mash-ups, club nights, etc., and change those with just a few taps – it’s a fantastic feature that brings you even closer to, ultimately, not having to look at a computer screen the whole time you’re playing.

Now, the Touch FX are just fantastic because you get to tailor and personalize every included effect you use in real-time and do it straight away on the screen without much fuss. You can even control two effects at once to make special sounds that are dialed in just for that moment.

There are 22 built-in effects that range from your echo and reverb to 15 Beat FX (that come from the DJM-S9), and also seven new effects that are really interesting. Outside of the included ones, you get six assignable buttons that can control whatever Serato or rekordbox effects that you have assigned in the software and also on the mixer. You can create combos with all of these that make for really fun and unheard-of transitions, cuts, and scratch routines that not a lot of other mixers offer.

One new feature that really stands out to me is the control of Decks 3 and 4 from within the mixer – something that you don’t see with other mixers. You can enable Deck Move and simply take a track on Deck 1 and move it to 4 or a track on Deck 2 and move it to 3 without an interruption in sound. What this can do for you is free up Decks 1 and 2, so you can start mashing up those other decks with different songs, loading your scratch samples (which you can also access with the ease of a button on the mixer), a cappellas, or other tracks to build anything you would like in the moment.

It brings the ability to actually scratch two tracks at once, which is really fantastic and fun to do. The Deck Move is a slick feature that offers enormous control, giving you more customization and more ability to be creative on the fly. 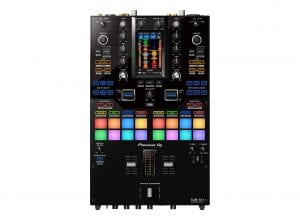 The DJM-S11 also works in rekordbox in many of the same ways. In my opinion, the software tends to be stronger in the music-management part than the performance part. Thus, I will not go into any more detail on that. But I will say if you are a rekordbox fan and that is what you use, then this unit is worth checking out. Why? Because, not only does it fully hardware-unlock Serato, it also fully hardware-unlocks rekordbox for both regular and DVS functions. Being a rekordbox and Serato mixer, it is one of the best devices I’ve used with the software.

Now, onto the most important parts of any battle mixer: the crossfader and its controls. This mixer boasts an improved Magvel Fader Pro magnetic crossfader that slides truly smoothly and offers great accuracy. In comparison to the S9’s fader, it is a definite improvement – it makes cuts even stronger because Pioneer DJ boosted the rigidity of the knob-mounting axis in the vertical direction by 30-percent. This helps to keep the fader’s accuracy going strong hours into a set with a lot of scratching, no matter how rough you can get on the fader. It just adds a lot of stability to the base of the fader.

Pioneer DJ even added a tougher coating around the crossfader top, so that there would be less fading of the paint there with excessive use. You have the ability to dial in the feel of the fader just the way that you like it, with the included knobs on the front of the mixer to get it exactly where you need it to be.

These controls were on the DJM-S9, so nothing too new here, but it’s still impressive – tried-and-true support to get the sound and feel that all battle/scratch DJs would want. To get into more detail, you have a Feeling Adjust knob that is centric to dialing in what you would like the crossfader to feel like, per its name. You can go from light to heavy and anywhere in between.

You have a knob to adjust the curve of the crossfader itself, along with the curves of both Channel 1 and Channel 2. This really creates some cool ways that the crossfader can function and can make for some interesting cuts and scratch combos. I am very pleased with the way that Pioneer DJ updated the crossfader and thrilled at how great this product has turned out because of it. 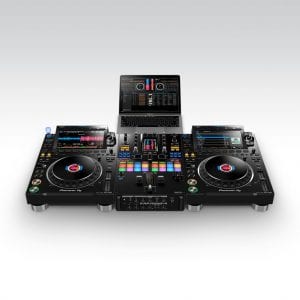 There are a few other additions and changes that were made to this mixer, some a little obvious, and others not so much. One that stands out would be how large the pads are in comparison to the DJM-S9. These pads feel so nice and are so responsive to the touch, plus the lights are vibrant and catch your attention. I mentioned it earlier, but the ability to access Serato’s Scratch Bank so quickly is absolutely fantastic, especially for our scratch DJs who would use that function the most.

One feature that is paramount for any mixer that I would own is to have a USB hub on the back, something I spoke about prior. But this isn’t a feature that I find in many mixers, unfortunately. This mixer, luckily, has that and it works perfectly. No need for those annoying non-built-in USB hubs and taking over all of your USB ports – we all know those are precious. With two USB ins on the back also, you can connect two Serato-ready computers and mix from both, or easily switch between the two with the selector knob that is on both the upper left and right for each channel. It’s a strong addition, and something that is perfect for playing with some friends or doing a B2B set.

One last feature I would like to highlight is the Smooth Echo. It’s a small button on the bottom left of the mixer, but it creates an echo every single time that you move any fader on the mixer or any knob/button assigned in the settings. You can adjust the way it functions on the screen with timing and such, and that makes for fun sounds to mix with your scratching – it creates cool combos you may not have heard otherwise. I am really a big fan of this addition and I think it’s something fun to use to get creative with.

So overall, I truly think the Pioneer DJ DJM-S11 is an impressive contender in the scratch/battle-mixer arena, and just might become a staple for those DJs moving forward. It costs $1,999 for the regular edition and $2,099 for the special edition, which has a distinct style to its body that is influenced by Pioneer DJ’s classic DJM-909 – it came out in 2004 and still has many fans.

The Pioneer DJ DJM-S11, with all of its upgrades, offers advantages for all DJs, but it sure shines the most for the scratch/battle community. If you are seeking a well-detailed, solid-built, strong mixer with an even stronger crossfader, then look no further than this one. With all of the functionality, digitality and solid analog abilities, you won’t be disappointed when you take this beauty for a spin. But more so, you’ll be impressed and inspired to take your creativity to the next level. 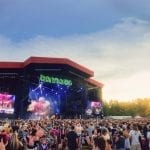 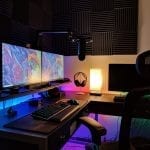