This month’s column explores a pair of unique products that may not be the first items that DJs specify when putting together a mobile rig or studio—but, as our reviewers attest, they’re worth the effort and money. Boston’s Paul Dailey tests Allen & Heath’s ZED60-10FX audio mixer, while St. Louis’ Josh Harris reviews IK Multimedia’s iRing motion controller.

Allen & Heath ZED60-10FX
Based in the seaside town of Cornwall, England, Allen & Heath is one of the most highly regarded audio companies in the world, and has been for over 40 years.
Initially recognized for its exceptional audio mixing consoles, A&H has expanded its product offerings in recent years to include a line of DJ mixers, headphones and software controllers. It’s currently distributed Stateside by the Newbury Park, Calif.-based American Music & Sound.

Over my 15 years here at DJ Times, I have had the honor of reviewing a number of standout Allen & Heath products from the Xone 92 mixer, which still sits at the center of my DJ workstation, to the Xone XD-53 headphones, which go out on the road with me every weekend.

About six months ago at a private event, I was asked to plug an acoustic guitar and microphone for a duo playing during cocktail hour–and literally did not have enough inputs on my mini mixer to accommodate the request. The following day, I began my search for a new mixing board, to serve as the nerve center of my sound system. I needed a unit that provided enough channels to run my controller, wireless and wired microphones, back-up sound source and still provide additional channels available for last-minute challenges, like the one I was unable to meet the night before.

Serendipitously, an article landed in my news feed discussing the recently released ZED line of mixers from old friends, Allen & Heath. The ZED-10 certainly fit the bill. But knowing that for only a few dollars more I could land a mixer with the same features, in addition to 60mm faders, the Allen and Heath ZED60-10FX entered the picture and ended the discussion.

Built with the flexibility to handle live mixing, studio work, and recording via the high-quality, stereo USB output, this mixer offers features on par with competitors at two or three times the price. Offerings like Aux and FX send, built-in filters and an impressive group of onboard effects provide previously unavailable features at this price point.

If this were a trade mag for guitars, I could go on and on about the versatile EQs and high-impedance jacks that eliminate the need for DI boxes. But from the standpoint of a DJ, let’s talk about why you should consider this mixer.

With four mic inputs, including high-pass filters, two stereo input channels and a ton of output options from XLR balanced master output to RCA record out and monitor out, ¼-inch Aux out and dual ¼-inch stereo main mix inserts, the ZED60-10FX is ready for anything you can throw at it. But really, how many inputs does the average mobile DJ need? Often the answer is “one more,” which is not what you want to hear in the middle of an important gig.

Versatility is good, but what about sound quality? The more components you add to your signal chain, the more the sound suffers, right? In my experience with the ZED60-10FX, it was just the opposite. Not only did it offer all the inputs and outputs I needed, but it warmed up the sound and gave my entire system a level of depth and presence that was not present running straight from my controller to my speakers or using my old mini-mixer.

The unit has been available in the States for more than a year, but Allen & Heath has really hit a home run here, as it’s a terrific solution for many mobile entertainers. From the general look of the mixer to the build quality, right through to the feel of the faders, it represents remarkable value for the money ($499 MSRP). 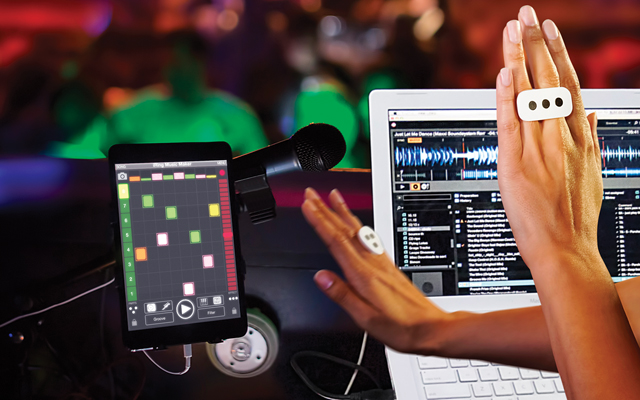 IK Multimedia iRing
The iOS and music-making worlds are now firmly entrenched in one another, and no company has led the charge quite like IK Multimedia.
This past year found the Italian-based company introducing a new motion controller for iPhone and iPad music-making apps called iRing. With a $24.99 MSRP, iRing uses the iOS device’s camera, along with patented image-recognition technology to locate the ring, which is wearable on your finger. The three dots located on the iRing allow you to control various parameters within your compatible iOS music app. One side of the ring has three dots in a linear pattern, and the other has three dots placed in a triangular pattern.

Here’s how IK’s iRing works: Once your iOS device’s front-facing camera detects iRing (using a compatible companion app), iRing’s movements are converted to MIDI control data, which is then used to control certain parameters within your iOS app. Sound cool? Well, it is.

For this review, IK’s GrooveMaker 2 and iRing FX/Controller were used with two iRings on an iPad 3. When using iRing FX/Controller to control another app’s effect parameters, Audiobus serves as the bridge between them, allowing the two apps to effectively talk to one another.

I quickly assembled a sequence in GrooveMaker 2, using some of the IK library along with some imported content. I wanted to focus on using iRing, so that’s why I set up a sequence ahead of time, thereby allowing me to concentrate on hand gestures and positioning.

The whole process was very seamless. The iPad’s camera immediately detected iRing and, within minutes, I was controlling the filter’s cutoff by moving my hand. It should be noted that it does take a few minutes to become comfortable controlling effect parameters in this fashion—and, you do want to make sure that you’re not too far away from your iOS device. I stayed within one to two feet.

You will see yourself on the iOS device’s screen, since the device’s front camera is what’s communicating with iRing. You will also see images of your iRing(s) on your iOS device within iRing FX/Controller, making it easy to follow your iRing’s movement along an X-Y axis.

The iRing does come with an app called iRing Music Maker, which is somewhat similar to IK’s GrooveMaker 2—so right out of the gate, you will have a compatible app to use with your iRing. For those of you who are already using iOS apps for music-making, iRing should fit nicely into your collection. I love real-time control of audio effects, so for me, this is a very useful tool, especially for performing.

DJs out there may find iRing an invaluable addition to their rigs, especially if they’re already using Audiobus-compatible apps for their live sets. IK continues to impress me with its ability to stay in touch with the direction mobile music making is heading, and iRing is no exception.

If you have any questions for Sounding Off, please send them to djtimes@testa.com.

In the Studio With: Stephan Grondin