It is indeed a pretty rare technology that has true staying power that spans decades. The telephone comes to mind. While many have cut their landlines in favor of cell phones, for many of us, copper wires still connect us to the voices of our friends (even if it does happen more frequently with a cell phone), and it’s fully possible to connect a rotary dial telephone from 1947 to those copper wires today and successfully place a call.

And so it is with MIDI—or Musical Instrument Digital Interface—the interconnection standard devised some three decades ago by the legendary Dave Smith and collaborators like Chet Wood, and introduced to the world by none other than Robert Moog clear back in 1982. A huge range of devices still come fitted with one or more of the ubiquitous 5-pin DIN connectors with labels like “MIDI IN” or “MIDI OUT” screened above them. Modern operating systems know MIDI. Your smartphone knows MIDI. Your tablet knows MIDI. And provided you can sort out the physical connection issues, a MIDI-capable synth from the 1980s can still be controlled today by a modern DAW running on a computer more powerful than most could imagine back then.

The coolest part about MIDI is that clever developers and engineers are still finding ways to leverage its ubiquity in innovative new ways. As any digital DJ knows, MIDI is the standard that was bastardized—er, leveraged—as the basis of most DJ controllers on the market today. And it’s a core piece of most musicians’ and producers’ studios in one way or another.

In this double review, I take a look at two innovative uses for MIDI—one for DJs, and one aimed more toward producers and musicians. 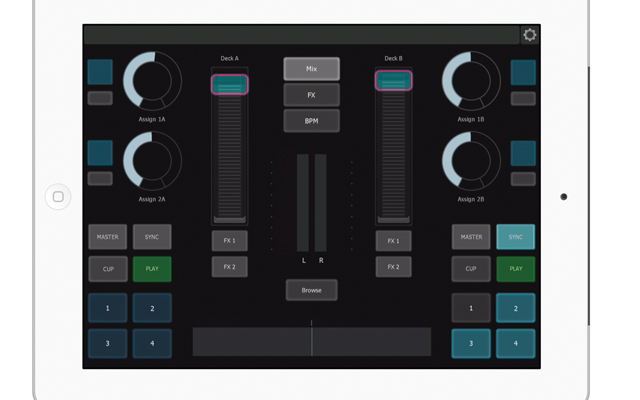 Mixur for Lemur
Lemur began life as hardware—a multi-touch, glass-faced music controller from French company JazzMutant. But the rise of the iPad specifically, and tablet computing in general, arguably began raining on its parade, leading to its eventual discontinuance. The Lemur name is now attached to an iPad app, produced by Germany-based Liine, BV, which has many of the same capabilities.

Using hardware-based MIDI connectivity (such as the devices from Canada’s iConnectMIDI), or by leveraging ad-hoc WiFi or Bluetooth, the Lemur app running on an iPad can use MIDI to control virtually any MIDI device—from sound modules to DAWs to DJ software to lighting (via MIDI/DMX bridges).
The Lemur app’s ability to be fully customized has led in turn to a cottage industry of commercial Lemur templates—basically customizations for particular use cases and/or target applications. One such commercial template is Mixur, from Desert Sound Studios, designed to transform an iPad with the Lemur app into a full-function DJ controller for Native Instruments’ Traktor.

Getting everything set up can be a bit tricky, frankly—not because it’s difficult, but because there are so many moving parts. First, you need the Lemur app. Next you need the Mixur template. Then you need the Lemur desktop software to install the template into the Lemur app. Then you need the TSI configuration file for Traktor (included with Mixur). Then you need to install that. Then you set up an ad-hoc WiFi network and establish a connection from your iPad to your desktop. Then…
Thankfully, the Mixur folks provide step-by-step directions that make it simple, and once it’s up and running, I discovered a capable, well-thought-out interface that provided a very responsive, very low latency, wireless controller for Traktor. Split into six primary interface “pages,” Mixur delivers control options for the full spectrum of Traktor’s capabilities. Giving the solution an extended spin in my studio was, frankly, a kick in the pants. Even on my iPad 2 (which is otherwise starting to feel a little sluggish in daily use with current generation apps), the combo of Mixur and Lemur with Traktor running on my Mac were snappy and instantly responsive.

Mixur’s designers approached things pretty logically. The six pages I mentioned are implemented in three groups of two, with a toggle button switching between each pair. They are: decks/mix, EQ/effects, and BPM/loop, making any of the six screens a maximum of two taps away. Between the six, you can access virtually anything in Traktor for which you’d ordinarily need the mouse or a dedicated hardware controller. I was only left wishing for a larger iPad so more controls could be shown at one time. (How ’bout a 24-inch iPad, anyone?)

About the only real negative I came up with is that Desert Sound Studios exclusively used text-based control legends; browsing Liine’s “freebie” template library, it would appear that graphical legends are within the app’s capability set, and perhaps usability would be improved by tasteful use of such graphics (for example, a triangle graphic for the play button, vs. the word “play”). Once you get used to using the Lemur app and the Mixur template, however, such things become a bit moot.

Now that I’m familiar with the Lemur app, and grasp how to install templates and set up ad-hoc WiFi with my Mac, I can see myself using both Mixur in my DJ sets, and other templates for other touch-control applications (notably with my DAW of choice). Perhaps I’ll even venture into the territory of creating my own Lemur templates.

The Mixur template is $14.99 from Desert Sound Studio’s web site, and requires the Lemur app, which is currently priced at $24.99 in the Apple App Store. 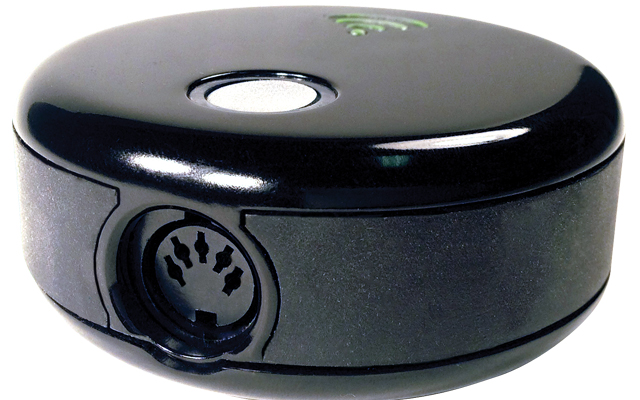 Zivix PUC
Not everything happening in the iPad + MIDI space is an app, however. Minneapolis-based Zivix recently introduced an innovative solution that’s the reverse of Lemur. Instead of using the iPad as a controller, the Zivix PUC lets you use a MIDI controller with the iPad—wirelessly.
Supporting iOS’s CoreMIDI standard and leveraging WiFi approaches in an innovative, highly usable way, the PUC makes it dirt simple to hook any standard MIDI controller to an iPad via 5-pin DIN.

The PUC, true to its name, is roughly the size and shape of a hockey puck. With a battery door on the bottom, a single 5-pin DIN connector on the side, and nothing more than a power button on the top, it’s a model of simplicity.

To make it work, you must download the PUCApp app from the Apple iTunes App Store; the app is free. To establish a connection between your MIDI controller and the iPad, simply turn the PUC on. From the WiFi connection screen on your iPad, choose the PUC’s WiFi network from the list of available networks. Load PUCApp to confirm the connection and form a CoreMIDI hand-off, then connect your MIDI device. After that, switch to whatever iPad MIDI-enabled app you want to use (e.g., your favorite synth, perhaps), and you’re off to the races. There’s no messing with setting up networks or dealing with ad-hoc connections.

Zivix calls the underlying technology “Z-Fi,” and claims that it’s more efficient than traditional RTP MIDI methodology. Whatever the case, I found it to be simple, fast, and effective; getting things going for a work session takes mere seconds start to finish, and the connection was maintained perfectly until I was done and turned the PUC back off again.

The path of the PUC to market was interesting. Zivix started out to bring their JamStik, to market—a simple, five-fret, string-based MIDI guitar controller for the iPad. JamStik combines innovative, patented sensing technologies along with the company’s Z-Fi wireless connectivity. From their work on JamStik, Zivix sensed an opportunity in the marketplace to peel-off Z-Fi, and provide a more general purpose MIDI connection—one more flexible and one with more freedom (from wires, specifically) than the usual USB + Apple Camera Connection Kit that many manufacturers have leveraged to crowbar wired MIDI hook-ups to iPads. PUC is the result.

Priced at $129.99, the PUC seems a bit spendy, especially when compared to the $29.99 price of a Camera Connection Kit from Apple. But the wireless simplicity, coupled with support for true 5-pin DIN MIDI connections (vs. supporting only USB-based MIDI controllers), it seems as if it’s worthwhile for many potential users.

Summary
After three decades, MIDI continues to prove that its inventors were on the right track. And with innovations like these, it’s nice to see that it’s destined to have a very long life ahead when it comes to hooking our musical devices and software together in ways that back in the ’80s couldn’t have been envisioned. Now that is true staying power!