Since the famous Minimoog Model D made its debut over 40 years ago, Moog Music has been a leading pioneer in the realm of analog synthesizers.

From growling basslines to fat legato sustained notes, the warm low-end and analog sound of Moog synthesizers remain a staple in electronic-music production. Combining an intuitive analog circuitry with Moog’s coveted ladder-filter technology, each Moog synthesizer is carefully constructed with the upmost attention to detail. With that being said, anytime Moog releases a new synthesizer, all eyes shift back to Asheville, N.C., where the world awaits to see what new innovation Moog laboratories has made.

The Sub 37, Moog’s first 2-note paraphonic analog synthesizer in over 30 years, is a notable release from Moog Music. This 37-key analog synthesizer comes with two oscillators, one sub oscillator, and one noise generator based on the Moog Sub Phatty. Compared to its older counterpart, the Sub 37 boasts two fully assignable modulation busses, two DAHDSR looping envelopes and a powerful new arpeggiator with paraphonic 64-note step recorder.

First Impressions: The Limited Edition Sub 37 is housed in a rugged black steel chassis with aluminum extrusion, and finished with classic wood sidepieces. In every aspect, the Sub 37 is an eye-turner.

The synth connects via USB or MIDI and has an audio in/out, as well as inputs for pitch, volume, filter CV and Gate. Weighing about 22 pounds with 37 semi-weighted keys, the Sub 37 not only demands visual attention, but also begs to be played with.

Setup & Use: Setting up the Sub 37 through a DAW was relatively straightforward. With a simple USB connection and a single line into an audio interface, the synth was ready to go.

The synth comes initially equipped with 16 banks of 16 presets, half of which are populated, for a total of 256 presets. Having the same platform engine as its Sub Phatty predecessor, the Sub 37 also has a dedicated sub-oscillator, as well as a multidrive circuit in the filter that gives the synth engine the all powerful gritty and destructive sound that users have come to love.

A Quibble: One slight negative compared to its predecessor is that Moog does not offer a DAW plug-in editor for the Sub 37 synth. (Editor’s Note: Moog Music tells us that its product developers are currently working on a free version.)

Performance: To best sum up the new synth in one word would be… unrivaled. The Sub 37 has a very unique sound-sculpting capability that allows users to achieve full-on, brutal, destructive, vicious and downright body-moving sounds. With unique features like its looping filter and amp envelopes with DAHDSR, the Sub 37 sound engine allows for enhanced creativity and control when it comes to achieving a desired tone.

In addition, the Sub 37 has multiple modulation LFOs and a new arpeggiator step sequencer that allows for even greater creativity and manipulation. Lastly and most importantly is the Sub 37’s ability to play paraphonically, or the ability to play two notes at the same time. This feature is engaged by pressing a button called “duo mode,” allowing users to achieve very complex and unique sounds.

Conclusion: Building upon its already successful Sub Phatty synth engine, Moog Music delivers another home run with the Sub 37. Moog has produced a gem with this synth, adding several new features that give users a new depth of control. Although on the higher end of the pay grade at $1,579 MSRP, the Sub 37’s sleek look coupled with its unique sound design makes it worth every penny. Again, it’s important to mention that the Sub 37 Tribute Edition is only available for a limited time and therefore enthusiasts should not miss this opportunity! 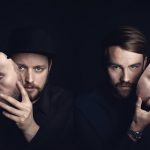