This is the second of a two-part review where DJ Times takes a look at new additions to the Apple’s music ecosystem. In this entry, Wesley Bryant-King examines the software parts of that ecosystem, including updates to Logic Pro X, GarageBand for iOS, and more.

Last month, I reviewed Apple’s new MacBook Pro, and gave some perspectives on whether laptops or desktops are a better choice for music-making. But hardware is obviously only part of the music-making equation, so it seems right to see what the folks at Apple are bringing to the table in the software arena as well.

To start with, I have to give props to Apple as a company who understands the concept of lock-in. The tech press these days is abuzz with references to the network effect, where companies like Facebook prosper and gain users simply because so many other people are already users, and much of the value comes from connecting those people to one another. Somewhat similarly, with lock-in, companies hope that by making their products work so well together, you want to buy more, and once invested, have little incentive to change. Apple does that with things like iMessage, iCloud, and other services that work across Macs, iPads and iPhones. And it appears that Apple is working to do the same with their music ecosystem; not that that’s necessarily a bad thing.

What’s New: The Touch Bar on the new MacBook Pro, which I discussed last month, is one example of this lock-in concept. Logic Pro X 10.3 adds support for the Touch Bar, enabling some innovative interface capabilities in music workflows — and tying Apple’s software to specific Apple hardware in the process. But I think the most exciting news with Logic Pro X 10.3 is the addition of some mobile workflow capabilities via GarageBand for iOS 2.2. And while that, too, is lock-in, it’s lock-in that provides some tangible value. 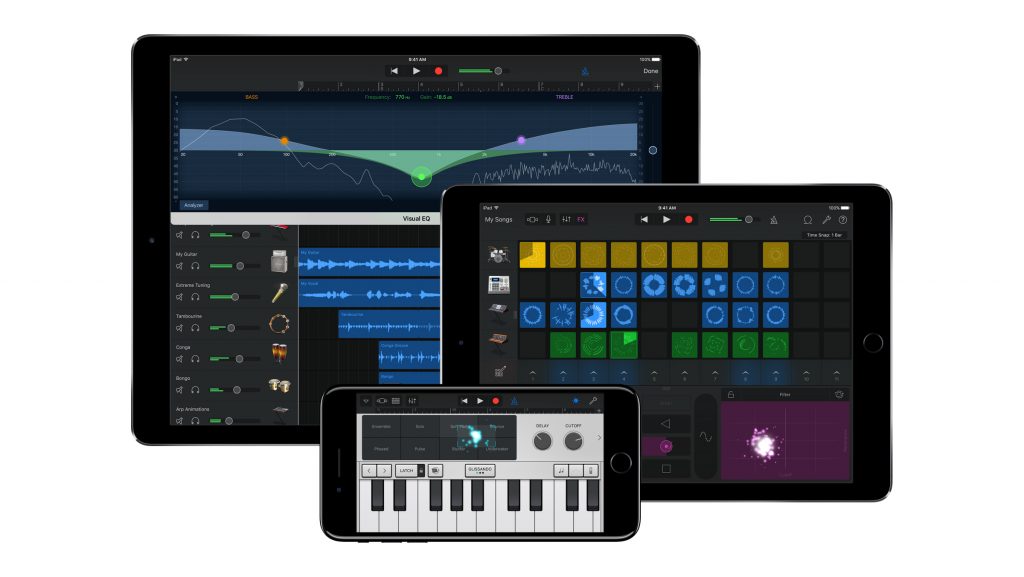 The method works great, but the limitations become rather quickly apparent. To get those Logic tracks to GarageBand on a mobile device, the project is bounced to audio, and cannot be modified on the mobile device, limiting the work solely to additions of new material. You can reportedly add up to 30 new tracks during an iOS device session, and those new tracks (whether audio or instrument) will be imported back to Logic as new additions to the existing, still fully editable project. Of course, that has value, albeit perhaps somewhat limited value, and it rather hints at broader capabilities that Apple might choose to bring out incrementally in the future.

One plus of this new workflow option is the addition, in GarageBand for iOS 2.2, of the Alchemy synth. Included with Logic Pro X, and a great little soft-synth in its own right, Alchemy’s iOS implementation comes with a selection of great patches that cover multiple genres. As is the case with Logic on the Mac, it sounds great, and new Alchemy tracks come back to Logic in perfect form, using that new workflow I just outlined, too.

GarageBand has also received the ability to use Audio Unit (AU) effects plug-in apps, enhancing its utility for amateur music-makers with more serious needs. At the moment, it appears that the selection of AU plug-in apps for iOS is fairly limited, however. According to Apple, the actual code of AU plug-ins is virtually identical between macOS and iOS, which leaves me wondering why more desktop plug-in makers haven’t made their offerings available on iOS. The plug-in makers I spoke with wouldn’t comment on the record, but one must assume it has something to do with the financial model of apps vs. desktop software.

Whatever the case, here’s hoping for better desktop/mobile device workflows in the future. 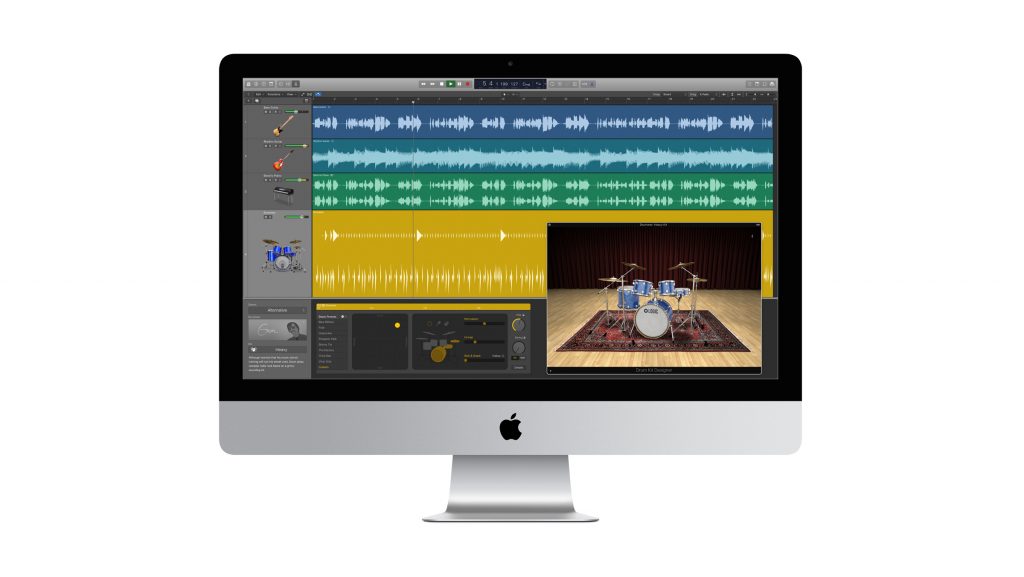 Moving beyond their interoperability, both Logic Pro X and GarageBand for iOS have received a range of other spit-and-polish type enhancements.
For GarageBand for iOS 2.2, a redesigned sound browser helps users find what they’re looking for more easily, while multi-take recording provides more flexibility to capture performance and compare takes. Audio recording has also been improved to more easily add common effects.

For Logic Pro X 10.3, I’ve already mentioned the Touch Bar interface available on the new MacBook Pro. The ability to use the Touch Bar as a mini-MIDI keyboard is quite useful on the road, and Logic also supports the ability to assign key commands to Touch Bar buttons so your favorite functions are a touch away.

The new Track Alternatives feature makes it easier to tinker with variations on a track, and compare different versions of track, as you continue to arrange and produce your music — something that’s perennially challenging in most DAW environments. And Selection-Based Processing allows Logic users to apply effects to specific selections, for much greater creative control and flexibility.

This review was one of the first reasons I’ve had to truly dig into Logic Pro X, and I found a lot to like about it.

Chief among them was the ability to — get ready for more lock-in — use my iPad Pro (or other iOS device) as a remote control interface for Logic using an app Apple offers (understandably named Logic Remote) at no charge. It’s implemented exceptionally well, frankly, and it provides a range of capabilities. On my iPad Pro, it offered a great way to essentially extend the screen of the computer to control the mixer, as well as track-specific things like adjusting instruments, while being able to use a virtual keyboard, drum pad controller, or so-called “chord strips” — all of which is reminiscent of what Apple offers users of GarageBand for iOS in terms of input and control. The app also works with Apple’s MainStage and GarageBand for macOS applications. With its highly responsive, low-latency interface, it’s nearly a must-have for Logic Pro X users in my view.

One of the things that didn’t impress me quite so much was the default interface for Logic Pro X. The software starts initially in a mode that’s designed to be familiar and comfortable for users of GarageBand, and indeed, the family resemblance with GarageBand is unmistakable. That’s certainly a plus for GarageBand users wanting an upgrade path; the fact that Logic Pro X can read GarageBand projects directly also makes it a good choice for GarageBand users. But the almost quaint interface in this mode hid much of the power of the application from view, and it wasn’t even apparent to me early on that this can be disabled in favor of a much more expanded view with more powerful options.

In either mode, however, I didn’t find the user interface to be particularly intuitive. Granted, every DAW has its own way of doing things, but I seemed to spend more time than I would have liked trying to figure out how to do even fairly basic activities like looping playback, or splitting tracks. Of course, the more you use the software, the more natural that doing so will become.

On the plus side, however, Logic Pro X proved itself to be exceptionally stable and a good performer, both on the MacBook Pro I tested last month, and on my older MacBook Pro hardware. It comes with a lot of content, as well as a number of must-have plug-ins and instruments, and between that and its $200 price point, it makes the software a good value. The ease of acquisition and installation (you can get it from the Apple App Store on your Mac, or order a Mac with the software pre-installed) certainly also lowers the barriers to entry.

Conclusions: We can debate the merits of technology lock-in and single-vendor “ecosystems,” but they wouldn’t exist, and users wouldn’t adopt them, if they didn’t provide real, tangible value. And that, in my view, is what Apple is doing. Both with hardware, and with software, they’ve created components for making music that work, work well, and work with each other. While, of course, Apple hopes that means they sell you more goodies; if they do, with the investment comes utility. And with the new versions of Logic Pro X, GarageBand for iOS, and other offerings like the MacBook Pro, iPad Pro, and the Logic Remote app, it seems clear that the company understands how to create a compelling, end-to-end user experience that delivers on its promises.

If you have any questions for Wesley Bryant-King or Making Tracks, please send them to djtimes@testa.com.