With vinyl sales making a comeback and Digital Vinyl Systems becoming more and more attainable, the turntable market has never been a more competitive playing field, especially with a host of DJ-equipment manufacturers vying to be the next club-standard turntables.

Adding the new VL12 decks to its PRIME series of professional gear, Denon DJ certainly seems to offer an intriguing proposition to DJs wanting a no-compromises turntable to add to their setups. With the PRIME designation, the VL12 joins other Denon DJ flagship products, including the SC5000 media player, and X1800 four-channel mixer.

From an aesthetic point of view, the Denon VL12 certainly looks the part with a brushed-metal look and feel, wrapped in a black-paint scheme. Contrasting the black, brushed-metal chassis, there’s a fair amount of chrome throughout, including the platter, platter edge, tonearm, power switch, spindle, and adaptor. A striking departure from other turntable designs, the LED ring around the platters distinguishes the VL12 from other turntables on the market. Its color and brightness are user-controllable and can cycle from two levels of brightness and a variety of different colors. In various dark environments, the ample lighting was a welcome addition and provided a cool visual enhancement to the turntables. 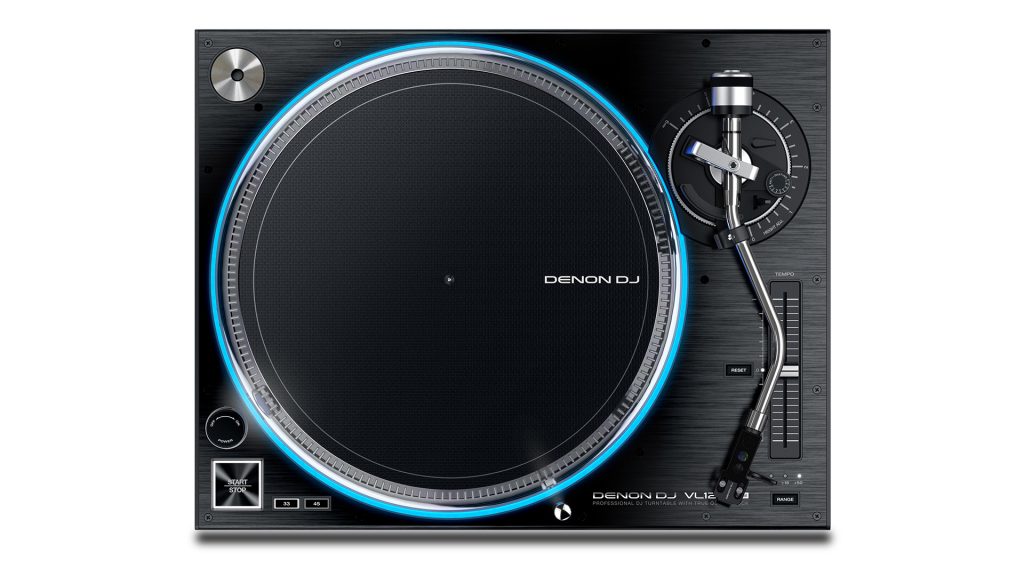 Straight out of the box, the unit came virtually ready to go with all the essentials for DJ turntable performance. Setting up the unit involved balancing the tonearm, and setting the platter and slipmat. All VL12s ship with an included Denon DJ slipmat, RCA cables, two target lights – one black and one with a chrome finish, and a headshell. Much like other professional-grade DJ turntables, the headshell doesn’t include a cartridge nor a stylus, allowing DJs to select one that best fits their needs.

Clearly designed with the rigors of heavy use in mind, the VL12 features a rugged, metal faceplate, and durable platters without any sort of wobbles or inconsistencies. The S-shaped tonearm feels solid and doesn’t seem like it would be prone to fracturing or breakage. It is worth noting that with output connections and frontal controls located on the narrower sides of the unit, this turntable seems aimed more at the vertical, turntablist layout than the horizontal, mixing layout. However, it also should be noted that Denon provides right-angle cables on both the RCA and power cables for the specific purpose of cable management in club-style/horizontal layout.

As far as controls, the VL12 features a single, square play/pause knob, a rugged motor power switch, a connection for either of the two target lights, and a 45 adaptor. I appreciated the wide pitch fader that can switch from plus/minus-8, -16, and -50 through a rectangular button below the fader. Additionally, resetting the pitch was a non-issue, given the physical reset button and white light indicating the fader neutral position. The fader itself feels solid and offers enough resistance for fine tempo movements and precise control.

At the front of the turntable, recessed under the plinth, there are switches to control the color of the LED platter-ring light and its brightness. Scratch and turntablist DJs will appreciate the two-position torque switch, which controls the torque of the turntable’s direct-drive motor, that is located next to the LED controls. In my testing, I didn’t notice a massive difference between the two modes, so I guess it really comes down to personal preference and finding which mode best suits the user. That being said, both modes offered a real playable feel, giving me the confidence to pull off even the most elaborate scratch and beat-juggling routines.

After spending several weeks with a pair of VL12 turntables, I was really pleased with how the turntable operated: simple and straightforward with no real surprises. Connecting the tonearm with a Shure SC35C cartridge, the turntable performed well in hi-fi settings for passive listening, connected into a Serato DJ interface and running control vinyl, or when playing vinyl for purely vinyl sets. In loud environments, the feet and solid isolation provided sufficient damping to avoid skipping or the dreaded needle flutter. Lastly, I also had many DJs comment on the platter-edge LED ring light, which never failed to impress.

As far as competitors, the VL12 competes against other premier, full-size turntables, and, throughout my comparison, I found myself mentally comparing it with the Pioneer PLX-1000, Reloop RP-8000, Stanton STR8.150, and, of course, the legendary Technics SL-1200. Coming in more expensive than these other turntables ($899 MAP), the Denon VL12 differentiates itself more through the aesthetic department than the performance arena. I suppose we’re at a point where almost any high-quality turntable is a high-quality turntable with only minimal differences between the actual models.

For DJs exclusively wanting to use Serato DJ, the forthcoming Rane Twelve motorized platter controller, for example, makes a very compelling case for itself, especially when considering its lower price, no need for a cartridge purchase, and significantly more comprehensive feature set. In other words, the key question becomes whether or not DJs are willing to part with $899 for a turntable. If the answer is yes, then the VL12 from Denon DJ certainly will not disappoint and is a fine entry from Denon DJ into the competitive turntable market.