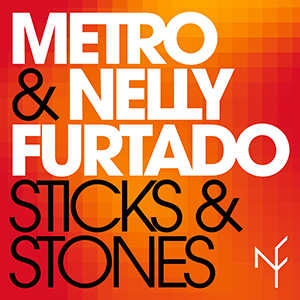 These tracks are for the exclusive promotional use of professional DJ Subscribers to DJ Times and are NOT to be shared under ANY circumstances. Please do not forward them or post them elsewhere.
Your opinion matters the Record Company. Comments may be left at the link above and they will be sent directly to the label. To offer feedback, reply to this email or leave it on the site.
More about:

International pop star Nelly Furtado teams up with Metro for completely re-worked versions of her hit, “Sticks And Stones”

Nelly Furtado and Metro have come together to release a brand new, completely re-worked version of Furtado’s song “Sticks And Stones” from her 2017 album The Ride.  The Sticks and Stones re-release is available Friday, May 25th on Radikal Records in North America.  Produced by Metro, the re-release includes the new version of “Sticks And Stones” featuring re-recorded vocals by Nelly Furtado, and Metro’s remixes.

International Canadian recording artist Nelly Furtado first made her impression on the music industry in 2003 with her breakthrough album Whoa Nelly!, featuring her hit songs “I’m Like A Bird” and “Turn Off the Light”, winning a Grammy for Best Pop Vocal Performance for the former single.  Since then, she has released six studio albums – her third (Loose) featured hit singles “Promiscuous”, “Man Eater, “Say It Right”, and “All Good Things (Must Come to an End)”.  Her fourth record Mi Plan was her first Latin album, and won a Latin Grammy Award for Best Female Pop Vocal Album.  Her latest album The Ride was released on March 31, 2017 on Furtado’s own record label Nelstar Music.

Metro are a UK-based team of writers, producers and remixers who have worked with some of the biggest names in pop.  Some may know them for their remix of Britney Spears’ “I’m Not a Girl”, or their remix of “One More Chance” by Michael Jackson, which was featured on a Michael Jackson ‘Greatest Hits’ record.  Being no stranger to working with big names, Metro have worked on numerous hit songs by Lady Gaga, Cher, Enrique Iglesias, Jennifer Lopez, and more.

Finally releasing their collaboration with Nelly Furtado in North America, Metro shared that they are thrilled about their latest release:

“We’re super excited about this track – Nelly’s a global superstar and it was great to work with her…we hope everyone loves this tune as much as we do!”