There is simply no stopping David Guetta! Just a short month after dropping his seventh studio album aptly titled 7, the dance music legend has taken the time to deliver an official remix of Calvin Harris and Sam Smith’s recent smash-hit, “Promises.”

Known for being one of the true pioneers to brought electronic dance music into the mainstream, Guetta has returned to his roots giving “Promises” a melodic, Progressive House makeover transforming into your textbook mainstage anthem. I guess you could say he hasn’t lost his touch.

Stream this booming remix of “Promises” below. 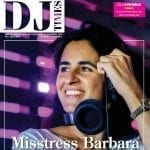