Currently resting up following his North American ‘Crystal Eyes’ Tour, Canadian producer Ekali is still buzzing off of the much-anticipated release of his debut EP, Crystal Eyes, which has taken the electronic community by storm with his recent fall tour looked to bring the majestic listening experience to life one city at a time.

Popping onto the scene in 2014, the Vancouver native quickly proved to be a true force to be reckoned with releasing a number of captivating original productions and remixes finding his way into the electronic spotlight.

Being fortunate enough to call Skrillex’s powerhouse label OWSLA home, Ekali will never forget how difficult it was to get to where he’s at today and is always looking to shine a light on up-and-coming talent while giving them the advice to be successful in this industry in the process. Whether rising talent or die-hard fan, Ekali is a humble as they come.

We recently caught up with Ekali during his recent tour stop at Brooklyn’s Warsaw to discuss his debut EP, how his journey began and everything else in between. Check it out!

DJ Times: Let’s take a trip down memory lane, how did you get into music?
Ekali: My parents are both musicians and have always encouraged me to be musical. I started playing Violin in grade one, moved on to guitar & other band instruments at 12, and haven’t stopped since!

DJ Times: When were you first introduced to electronic music? Burial, correct?
Ekali: It was through my sister listening to electronic music across the room growing up… she was into DnB and “IDM” like squarepusher, aphex twin etc. That record by Burial, “Untrue”, was the first artist project to ever make me want to MAKE electronic music!

DJ Times: How would you say your sound has evolved since your first original, “Unfaith”?
Ekali: I think it’s evolved down multiple forks in a road and they’ve all converged back together at this point. That “Unfaith” sound is still present in my current productions, I’ve just expanded into others as well. I think I’ve finally found a way to tie together that more melodic, ethereal sound with the more aggressive songs I’ve made as well.

DJ Times: How much did your time at the Red Bull Music Academy help you develop as a producer?
Ekali:It helped me learn to collaborate and how to absorb others’ creative energy. There were 30 of us, ALL from different cultural & musical backgrounds… so when we were obligated to collaborate with each other, a beautiful thing happened where some of us had a hard time understanding each other… both linguistically and creatively… and the music that came from that was very inspired and interesting. Learning to collaborate with others who aren’t necessarily in the same lane as me was a very valuable lesson.

DJ Times: After almost five years producing electronic music, you recently dropped your debut EP, Crystal Eyes. Were there nerves leading into a release of this magnitude compared to releasing singles in the past?
Ekali: Absolutely. I think that people’s attention spans are slowly shortening and it feels as if many listeners don’t care about albums anymore. I was extremely anxious & thought that people would be upset by the music on the EP or just not listen entirely; I guess I was wrong. The reception from the EP has been fantastic and I’m very happy people ended up liking it.

DJ Times: What was your creative process behind your EP? It is quite the musical journey.
Ekali: Thank you! This EP took me the better part of a year to write. The creative process mostly involved just trying to find a distinct
“mood” that all the songs carry in common. For me it was “the end of summer” and losing someone close to you and feeling helpless. You can find those themes throughout the lyrics and sounds in the EP from front to back… I think finding lyrical and sonic themes helps to tie music together.

DJ Times: Your recent episode of Awakening Radio featured track you hand selected for unknown and up and coming producers, who are a couple blossoming producers that have caught your attention as of late?
Ekali: TYNAN, Jaron, TWERL

DJ Times: What advice do you have for producers grinding away in their bedrooms looking to break through?

Ekali: Stop spending time and energy trying to find promo emails, and stop allowing a “lack of reception” re: your music affect how you feel creatively. Creating music is supposed to be fun, and if you focus that energy instead on becoming BETTER, and making your music & art presentation as strong as possible, you will go further. Good music will be heard.

DJ Times: What is your current opinion of the world of electronic dance music?

Ekali:I think there’s an overwhelming amount of good music coming out, and there’s also a sea of music i personally cannot stand coming out too. I think peoples’ tastes are evolving and are becoming more accepting of newer sounds… which is great. I’m seeing a lot of hyper-artistic musicians with a very niche and focused sound succeed beyond anywhere they could have possibly reached 4 years ago. I just hope that consumers continue to become more involved in the music and continue to care and enable all the amazing artists out here to thrive off their creed.

DJ Times: You’re currently on the road as part of your ‘Crystal Eyes’ tour in supporting your debut EP which features truly awe-inspiring production, why did you feel it's so important to give fans a full experience rather than a traditional DJ set?

Ekali: I see it as a responsibility. I think there are a lot of lazy producers out there who see a lot of success very quickly, and then just play nightclubs and try and make as much quick cash as they can… for me this is first and foremost about the art. If I lose money, but can express my artistic vision clearly and give the fans (the ones who are responsible for my success) something special and moving, then that is money well spent for me.

DJ Times: Some producers take some time off after dropping an EP but you recent revealed you’ve got your debut album on the way in 2019. No days off for Ekali, huh?
Ekali:No rest!! The shows and the production are continuing all the way through the new year and into 2019.

DJ Times: You also mentioned it won’t feature any producer collabs, no ghost production, and will mix and master it yourself. Why are you choosing to go this route?

Ekali:I want my debut album to be all my own sounds. I think the main reason I want to go this route is because that process is how I’m going to grow as an artist as much as possible… and it’s really going to sound like me and glued together as a project, instead of being all mashed up and confused.

DJ Times: Would you say the process creating Crystal Eyes was somewhat motivation to get started on the album?
Ekali:Yes absolutely. I think I’m getting better & better at finishing original music.. and I find putting out these big artist projects rewarding and cathartic. This last release has me wanting more.

DJ Times: Will there be a theme to this album similar to your mixes?
Ekali:Absolutely. We will have to wait & see what that theme is but there will be a very consistent mood.

DJ Times: Debut EP, tour, and now an album in the works, is there anything else Ekali has planned for the future? You always seem to have something up your sleeve, is it an Awakening festival?
Ekali: That’s a great idea! Perhaps in the future… We are going to continue to tour & release music in the meantime until I can get this project done. This very moment however, I’m taking a few days off to rest after this tour. 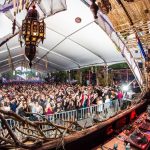