When the Coronavirus shut us down, clubs and festivals ceased, and everyone was essentially forced inside with no definitive end in sight, DJ Times wondered: How is our tribe coping? How are DJs getting by? So, we sent out our “Coronavirus Questionnaire” to DJ/producers from all musical genres to find out.

During the crisis, DJ Times will be presenting the questionnaire responses from talented music-makers from all over the world. Here’s our latest installment, this time from Berlin: the versatile creator of quality house and techno, Steve Bug (aka Stefan Brügesch).

What’s it like where you are? I’m living in Berlin, and like in most places right now, pretty much everything is on lock down. But we’re still allowed to go to work, to the supermarket, to the doctor, or to the pharmacy. Also taking a walk with the family or one other person, keeping the distance of two meters is allowed. As well as going for a jog, or something similar by yourself, is allowed. I am staying home most of the time, only going out for the necessary. I am spending much time in the studio, working on new music, or I just jam around. But that’s something I’d usually do as well. I try to stay fit, which isn’t easy, because I usually go bouldering three times a week, and there is nothing similar that you can do at home. But I found a good training app, hopefully it will help me not to fall back to much. I definitely play more video games these days. And home cooking, obviously, became necessary as well – but I am enjoying it.

What income-producing work have you lost? I lost all gigs from March to end of May so far, including a nice tour in North and South America, a beautiful festival in the Swiss mountains, and many other gigs. Besides that, I had a “Steve Bug Presents Play” party lined up here in Berlin at Ipse on May 23rd that’s most likely not going to happen either. So, basically, like many other DJs, I have no income for at least three months. Producing your own music and releasing it became more of a business card to get booked, since there is almost no money to make anymore. Like many others, I do have a proper studio that needs maintenance, and I have to pay the rent for it. This comes mostly out of the touring money. I really think that this crisis will affect our business for a rather long time – no one knows for how long we won’t be able to party together again. Many countries have closed their borders for several months. Festivals probably won’t happen this summer. Many clubs may not survive the shutdown. So there is going to be even more DJs fighting over less club gigs in the future. It will take time to grow into something new.

Are you doing anything now that can or will produce music-related income? As I mentioned above, I am working on lots of new music, which won’t produce much income, obviously, but it might help to keep the career going after this.

What are you doing now that’s ultimately constructive to your music life/career? I’ve been DJing, writing my own music, and running a label for almost 30 years – and that’s what I am good at, and what I love the most. Of course, there are alternative jobs/options in the music biz, but I prefer to leave these to those who are better at it. So apart from not touring, I am basically doing the same as before. I’m in the studio as much as possible, writing new music, actually a few more collaborations – obviously by sending parts to each other via the web – are planned, since everybody has more time in the studio these days. I’m also working on the two labels Poker Flat and Sublease Music, and I’m checking out the new releases every week. With the extra time given, I’m checking out more downtempo, chill-out stuff. That may influence the upcoming productions.

What’s the most surprising thing you’ve realized during this period of social distancing? How little problem I have with it, and how big of an issue it is for others. I mean, I love connecting with the crowds when I play, and I truly miss that right now. But when I am touring, I feel sometimes more alone, being close to strangers – on flights, or at airports, for example – than I feel right now. Being alone is a part of the job, if you’re not traveling with a tour manager. You’re also alone in the studio, sometimes for days – we’re used to it.

Have you considered doing anything online, like a streaming video mix? To be honest, I am not a big fan of visual “home-mixes.” I prefer to enjoy listening to music without looking at someone standing behind the decks, mixing tracks. I think it’s partly what’s was wrong with the scene lately… that people want to see DJs, rather than to listen to them. So, for me, I’d rather be doing podcasts. I just released one with Electronic Groove, for example. Besides that, I prefer to make my own playlists and listen to those – but that’s not club music at all. Even though it is fun to listen to house and techno mixes at home sometimes, they somehow belong in the clubs, where they can unleash their full potential.

Any theme tunes recommended for the moment? You mean like these? “Let’s Go to Bed” by The Cure, “Out of Touch” by Hall & Oates, “Good to Be Back at Home” by Charles Bradley, “When The Cookie Jar Is Empty” by Michael Franks, “Protection” by Massive Attack, “Soon I’ll Be Loving You Again” by Marvin Gaye, “No One” by Alicia Keys, “Let Me Go” by Heaven 17, “I’ve Seen That Face Before” by Grace Jones and “Enjoy the Silence” by Depeche Mode.

Any advice on staying sane & relatively positive through this situation? Keep your sense of humor, learn something new, do some sports, stay in touch with your friends and family, catch some fresh air and sun, if you can. Basically, keep yourself entertained – this includes learning about yourself.

To check out more Life in Lockdown features, click here. 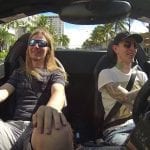 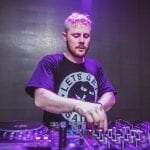