If you’re an EDM fan scanning the web, you’ve probably already seen the question posed on several platforms: Who is DVRKO?

We’re not at liberty to reveal that information, because… hey, we don’t know either. But what we do know is that DVRKO’s another masked studio talent making crisp, well-produced, electronic music that features sharp hooks and memorable melodies. Sound all too familiar?

Well, if you just let the music do the talking, it’s plenty convincing. His first single, “This Is How,” featuring a driving house beat, a bouncy, warped bassline and breathy vocals from British talent Sarah de Warren, has earworm quality. In fact, it was quickly added to Spotify’s Friday Cratediggers. Also, on the strength of Gozzi’s radio-ready remix, it’s already earned spins on the nationally syndicated Remix Top30 Countdown featuring Hollywood Hamilton (iHeartRadio), and other stations like Las Vegas’ KLUC-FM Radio and Dash Radio’s ElectroCity channel. Other remixes from Jayceeoh and Tony Arzadon are making waves in a variety of national radio markets – from Miami to Seattle.

So, as “This Is How” was beginning to gain momentum, we connected with DVRKO to discuss the story behind the single, get a glimpse into his creative process and peep his rather tricked-out studio.

How do you work? Do you have a regular studio routine?

Routine? Hide the bodies, regret my mistakes, make them into new ones. Live in the chaos of sound, sort it, compress it, make it dope.

OK… so, when you’re writing a track, where do you start?

I scream at the moon until it screams back. Sometimes it’s awakening out of a dream and hearing a pulsing bassline or an epic drum pattern. Maybe a parrot woke me up – it could be anything. Other times, it’s a fully produced track for which we are writing toplines, which end up getting completely reproduced until the production and song is baked. It’s literally all about the song at the end of the day.

Do you ever find musical inspiration at odd times, or does it usually show up on-schedule in the studio? Any experiences where your muse started talking to you in a strange situation?

My only muse is hating polka; otherwise, the inspiration hits and you grab it by the hair before it tries to get out. Whenever the idea or concept strikes, I really try to execute right away.

For “This Is How,” your first single, how did that come about? What kind of song did you want to make?

The process… I trust it, but it doesn’t trust me. Seems to work out still – we are in a dysfunctional relationship, kind of like this song. I wanted solid house, a record I could live in, a record I had lived in. Started with a topline of my past, let the rest tag along.

How did you work with Sarah De Warren on this cut? What’s the back-and-forth like when getting a vocal track complete?

Sarah is an amazing vocalist. We had her and singer/songwriter Rama Duke in the studio together. Great team, not my usual chaos – we got stuff done. Vocals slammed out and the melodies just appeared. We had it wrapped in four, five hours – bow and everything.

What are your main pieces in the studio?

Man, so much muff… wires everywhere. Mixing board is an SSL 4000. For vocals, I’m using an [Telefunken] ELA M 251 microphone going into a BAE 1073 [mic preamp] mod into a Retro Instruments Sta-Level tube compressor into [an Empirical Labs EL8] Distressor [compressor]. Been loving the Moog One [analog synth]. I have a pretty solid collection of vintage guitars – ’64 Fender Jaguar, ’62 Hofner Bass, ’74 Fender Stratocaster and some cool custom-shop pieces – a random banjo, a bell tower and a Theremin that turns itself on randomly. Also, I have a Fender Telecaster and a Gibson Les Paul.

What’s your DAW and why?

My two best friends, even though I think one of them is sleeping with my girlfriend, are Ableton Live and [Avid] Pro Tools. Ableton Live is amazing for the MIDI programming and production capabilities. Pro Tools is where the vocal-production and live-production elements get added into the production and the final mix stages of the songs.

What are your favorite plug-ins for specific purposes?

For the synth stuff, it’s [Xfer Records] Serum. For a lot of the orchestral and string elements, it’s [Native Instruments] Kontakt. In the mix world, I use a lot of the FabFilter stuff, especially the Pro-Q 3 [EQ]. Love the Brainworx stuff as well… and the Steven Slate bundle and Trigger for some of the drum-replacement stuff in the mix phase. For vocal tuning and instrument tuning, it’s Melodyne.

What about other hardware? Anything vintage?

Probably my socks, and my tooth brush definitely needs replacement. Otherwise, the SSL console is from the ’80s. We also use the [Telefunken] V72 mic preamps, which have a super crunchy sound to them. Have a few vintage [Teletronix] LA-2A [compressors] and [UREI] 1176 [peak limiters], along with a harp from 1947 that you will hear on some of the new productions coming out later this year.

Monitors start with the [Yamaha] NS10s. I use these to do some of the fine carving on the frequencies in the mix. ATC SCM45A monitors, these I use for the overall scope of the mix. Augspurger dual-15s with dual-18 subs, these bad boys are for getting the low-end right along with the overall vocal balance.

“This Is How” has a real hooky, warped bassline. How did you get that?

I made it on a carnival ride – you try keeping your hands steady after five fried Snickers. But seriously… originally, the track was not focused on the bassline. But Rama and Sarah’s topline process diverted and pushed the bassline to go with her vocals, so the chords under the topline were re-harmonized and it came out great.

What’s next for you? Another single? Album? Post-quarantine shows?

Our next single, “Lights Up,” is dropping June 29. We have several more singles dropping in 2020 and working on a concept album that may come out in 2021. Once the quarantine is over, I’m finally going to dust off and put this face in front of some crowds that won’t get to see it. 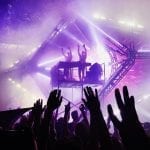