Seattle, Wash. — Alan Chitlik’s first job was as a newspaper reporter. One day he’d be covering a business acquisition, the next day a county fair, or maybe a murder trial. He says the experience served him well as a mobile DJ.

“In journalism, you potentially have a lot of people reading your work and commenting on it,” he says. “So you really have to understand each story to get it right and that comes from listening and asking good questions.”

Turns out good questions can be the basis of a profitable DJ business. We asked Chitlik, the owner of Seattle’s Puget Sound DJ, about it.

DJ Times: Buffet game at a wedding: You’ll ask questions, a quiz, about the couple – let’s talk about that.

Alan Chitlik: One of my favorite activities is to invite guests to the buffet with trivia questions about the couple. I love that it adds some entertainment to a time – waiting to go to the buffet – that is often kind of boring. It gives me a chance to go up to each table and establish a bit of rapport with them. And if they are struggling with the answer, I’m ad-libbing a bit to help them. Maybe offer a multiple choice, maybe encouraging them to phone a friend or something. It keeps it light. At the end of the night, I definitely get feedback from guests that it was one of their favorite parts of the night.

Your website has lead-generation forms. How do you drive traffic, and when do you introduce pricing in the sales cycle?
One defining characteristic of my couples is that they take the decision of selecting the right DJ seriously… that they start with the premise that it’s an important element of the wedding they want to have. So my website is designed to give them lots of information about me and who I am and lots of quotes from couples about what was the impact of working with me on their wedding. The amount of information might be a turn-off to some people, but the people who stick around can learn a lot.

Most of my leads come through my contact form on my website. My goal is to answer that inquiry as soon as I can. In that initial interaction, I’m hoping to get them to agree to a phone call or video chat. In that case, if it goes well, I’ll suggest grabbing coffee for a more in-depth discussion.

I will answer the price question directly whenever they ask it or whenever it comes up. My couples have told me pretty consistently that I’m offered good value for the impact that I have on weddings, so I don’t shy away from it or make couples go through a lot of hoops to get a price.

You’ve said you find the personal touch and human connection to be really rewarding. How?
That’s true, but my couples also like me integrating technology to make their process as smooth as possible. For instance, I have several dozen song lists from ceremony to last dance on Spotify. On my flyers and business cards, they can scan a logo and be taken immediately to all those lists. When they are selecting their music through their page in DJ Event Planner, they can easily pick songs from my Spotify lists or ones that they create themselves. Couples can sign their contracts online. When they want to set up appointments with me, I have pages set up for different kinds of meetings, where they have direct access to my calendar, so they can just pick whatever time and place works for them. At events, I can put small notices on each table and guests can use their phones to make requests which go directly into my Virtual DJ program.

What’s your lighting and sound set-up?
I use Virtual DJ, with a great skin called Controller HD by DennYo, and a Denon MC-6000MKII controller. For ceremonies, I use Sennheiser G3 lav mics a G4 Sennheiser hand-held. I use an RF Venue Diversity Fin antenna to reduce dropouts. The mics and music go into a Mackie 1202VLZ4 mixer. I usually use an Electro-Voice Evolve 50 speaker. For a reception, I go out from my mixer to a pair of Bose L2 Model 2 speakers and the B2 sub. I also go out to a Sennheiser G4 IEM system. I have three receivers, so I can send that signal wirelessly to some 15-inch E-V ZLX speakers or my battery-powered Bose S1 Pro. I use Sennheiser G3 wireless handhelds for the reception, including toasts. For lighting, I use two ShowCUBEs from Eternal Lighting. For uplights, I use the CUBEecho MK3.

You used to have a fear of being too “present” at events – you didn’t want to be the annoying DJ. How did you learn to control the narrative?
My first 20 or so weddings were for friends. And other than playing good music, I had no real idea what I was doing. The one thing I did know was that I wanted to avoid being that cliché DJ, who just seemed to love to hear himself talk. But I over-corrected. I would get the folks lined up for their toasts, but wouldn’t introduce them. I would let them do it themselves.

But then in 2011, I went to Atlanta for Mark Ferrell’s MC Workshop and it just opened my eyes so wide about the actual role of an MC. I got a lot of clarity about how much impact I could have if I was able to direct, inform and guide the guests throughout the night. Getting the guests’ attention and giving them the information about what is happening is such an important role. And from there, I began to try to take much more control to help my couples get the wedding they want. And it was a natural progression to get more involved in the flow and the timeline.

You treat what you do as a gift, don’t you?
When I grew up, my dad was a pharmacist. And he would come home rewarded by the fact that he was serving people, but it was essentially the same thing for him day after day, year after year. So that really made me see the value of a job that was different all the time.
As I hit my 30s, I was interested in living in Seattle, so I moved there without knowing what was next professionally.

I got on at Microsoft where I had a variety of jobs. But one of the most impactful things I did was give presentations on Microsoft products to groups across the country. It helped me learn to be comfortable on a microphone. And, one day, a few years in, my friend Annie told me on a Wednesday that her DJ had just bailed and asked if I could DJ her wedding the following Saturday. I literally had no idea was I was in for, but I gathered all the music she wanted, played the right songs at the right times and people danced when they were supposed to and I really enjoyed it. I started doing it for more and more friends – but really I just thought of it as a hobby and a way I could help out my friends.

We had twins in 2005 and I was a stay-at-home dad. As they grew a bit older, I started to contemplate my next chapter and kept returning to the idea of DJing. Every time I did it, it was just so rewarding and something I felt could do well in. I tried to educate myself. I’d have lunch with some of the better DJs in this area. I bought Randy Bartlett’s DVDs, started going to workshops. And eventually, my skills grew. And here we are. 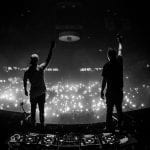 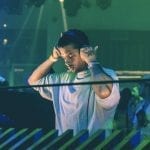