Visalia, Calif. – When the pandemic hit, Cali DJ Randy Hendrix didn’t diddle way his newly found free time watching Netflix. No, he made an effort to improve his business, Hendrix DJ Company, by working on his website and SEO tactics.

“When this is over and brides start to book again,” he says, “I want to be the one they see when they Google my area.”

Since then, the Central Valley-based DJ has been updating his promotional materials, adding T-shirts, pens, and pop sockets to the mix. He’s updated his logo, and is going through his equipment and cleaning it, while practicing his mixing, “and looking at more current clothes for events.”

He’s also been updating his materials for schools for the fall, and looking into providing trivia events for more weekday cash. “I want to be the one that excels when we are out of this emergency,” he says. “A little work behind the scenes now will create big benefits later.”

Hendrix does have the luxury of a full-time gig — and one that provides him unique advantages to make sure he comes out of the gate in good shape when the pandemic begins to wane. He’s a program director at a radio station, and has been at the same gig for 20 years — KCRZ/HITZ 104.9 and KVMI/My97.5. That, in itself, is a rarity.

“The secret is to work for independent companies,” says Hendrix. “I’ve worked for the big corporations and lasted about as long as anyone else, which is usually three to five years.”

He came to HITZ 104.9 in 2000 to do mornings, then did mornings and program-director duties for middays. Hendrix says it’s been a great help to his mobile DJing. “I program a Top 40 station and that helps with new music,” he says, adding that he’s aided by his Promo Only subscription, too. “But programming music on the air is different than a gig — at the gig, the crowd is in front of you and you can read the crowd.”

One aspect of the radio business that Hendrix does love is promotions. “We dream things up and I make them happen,” he says. “We give away cash, gas cards, trips to Vegas, shows to Katy Perry, Jonas Brothers, Justin Bieber, Shawn Mendes. I have taken listeners on a limo bus to see the Raiders play in Oakland the last five years, and we take 40 listeners to a beach resort about two hours away for a weekend and put on a luau. It’s always something different in radio. The listeners become your friends, and the couples become friends, too.”

A program director is one job that’s historically been less than secure. That’s why Hendrix’s 20-year tenure is so unusual. To drive this point home, iHeartRadio recently laid off thousands of employees.

“I knew people who got let go at iHeart, and try and help them when I can if I hear of anything open,” he says. “It always makes my heart sink, but I learned early on working for a company like that, they use you until they don’t need you – and that’s it. I wasn’t surprised by the layoff. It happens every year usually about November. It’s all about keeping the company on the profitable side. If they need to keep the revenue up, they let a lot of people go and then – boom – revenue is up.”

Hendrix is a realist — in radio, you need to be. “I know it will happen sooner or later,” he says about his tenure ending. “I’m not looking over my shoulder, because I believe if you keep being creative and relative you will keep your gig.”

And there’s always the mobile business to fall back on. “I know I always have the DJ service to fall back on full-time if I am out of a radio job,” he says.

But there are challenges. He’s usually at the station for 10 to 12 hours a day, and then has to run off to meet with a bride and groom. As a single-op, he does it all. He’s been doing gigs by himself for decades. In 1982, he spun his first gig. It was his sister’s wedding and he used turntables, cassettes and Bose 802s – he was 12.

“I like the weddings because everyone is happy, for the most part, and I get joy out of having a small part of making their day fun,” he says. “Whereas radio stations can be a drama pit most of the time… but fun, too.”

For Hendrix, like many others, the pandemic essentially stopped his mobile business in its tracks. He’s done a small handful of gigs this year, with everything postponed until the fall. The current crisis, says Hendrix, recalls those post-9/11 and the 2008 financial meltdown.

“This is about scared brides,” he says, “who realize down the road a few months the world will not end, and reschedule within the next 10 months as not to lose the venue.”

Getting back to his gear, Hendrix has, despite the economic downturn, begun to invest in some new items, as he recently picked up a pair of QSC K12 powered speakers. But he still has plenty of older gear, which, he insists, works just fine. “If you take care of it all,” he says, “it can last forever. I’m a firm believer that, if sounds good to you and your guests, then it doesn’t matter what it is.”

He generates a good amount of business through Facebook (“you show a video and pics of you having fun with a client, and they want that”), word-of-mouth from old clients, and radio listeners who know he’s a mobile DJ.

“That’s my tribe,” says Hendrix, “people who listen to and like music.” 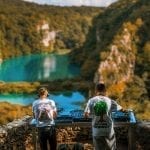 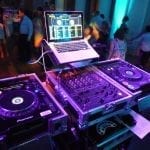