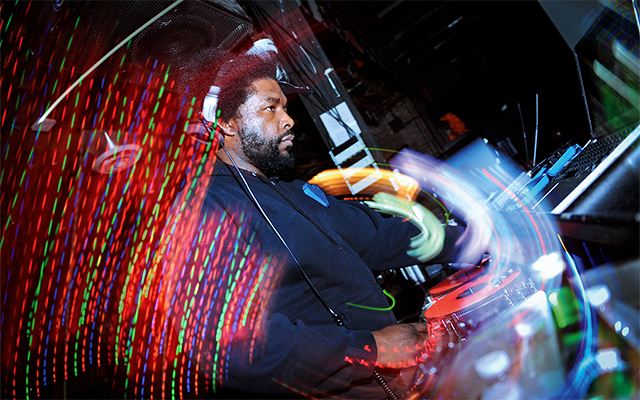 New York City – By now, Ahmir “Questlove” Thompson has become accustomed to attention, not to mention a frenetic pace.

With his iconic hair-pick jabbed into the side of his prodigious ’fro, which adds a few inches to his formidable 6-foot-4 frame, Questlove stands as recognizable as almost any athlete, actor or politician. At this point, he’s solidly enmeshed in America’s pop-culture fabric, perhaps as much as any modern musician not named Taylor Swift. But, of course, that’s what happens when you’re on national television five nights a week.

Indeed, since his group, The Roots, became Jimmy Fallon’s house band for NBC’s Late Night in 2009 and then The Tonight Show in 2014, life has gotten even more hectic. But, if you read his 2013 memoir, Mo’ Meta Blues: The World According to Questlove, wherein he details his youthful travels with his touring-musician parents, it’s easy to see why all of the work doesn’t overwhelm him. He’s literally been trained for it.

Obviously a precocious kid, he was navigating the family road map as a 1st grader, then operating the show’s lighting not long after that. He was DJing by the 6th grade and playing drums in dad’s band by 12. His first gig was at Radio City Music Hall. Pressure? What pressure?

Between a Nightly TV Show, a Weekly DJ Gig & a Slew of Side Projects, Questlove Juggles It All with Aplomb, Even Joy.

Eventually, he began to make a notable career in music. As the drummer/band leader for The Roots since its 1987 inception, Questlove has seen his profile rise in a number of ways. Initially, the Philadelphia-based group—co-founded with MC Tariq “Black Thought” Trotter—gained notice as the slightly out-of-step hip-hop band pushing the political or philosophical, never appropriating the gangster lean of the moment. Fourteen albums later, The Roots continue to tour and record—occasionally with artists as wide-ranging as Elvis Costello, John Legend or Jay-Z.

As a member of the neo-soul/alt-hip-hop collective The Soulquarians, Questlove helped produce a number of gold- and platinum-selling albums for D’Angelo, Common, Erykah Badu and Slum Village between 1999 and 2002. A walking encyclopedia of pop music, he’s shown up on musical documentaries of all genres—flip on VH-1 and you’ll see him at some point.

As a DJ, he started getting hired to play special events, high-end corporates, even some celeb weddings. In 2009, he began a DJ residency at Brooklyn Bowl called “Bowl Train,” a cheeky take on Quest’s enduring love for the seminal Soul Train TV show.

In early 2015, DJ Times started staking out Questlove. We didn’t realize it would take so long to actually connect—after all, he’s a busy man. But for the first nine months of the year, we caught a half-dozen Brooklyn Bowl shows, a Red Bull Guest House spot in Miami Beach during Winter Music Conference week, and innumerable TV appearances, including The Grammy Awards Show and the Super Bowl Halftime Show. And quite coincidentally, we even saw a cameo at a summer rock show, with The Roots sitting in with U2 for “Angel of Harlem” at New York’s Madison Square Garden.

Eventually, we sat down with him at 30 Rock in Midtown Manhattan before and after a taping of The Tonight Show. Despite a schedule as harried as any campaigning politico and a TV show that imposes its own unique pressures, Questlove remained upbeat and magnanimous, posi-vibes all around. Above all, he just seemed happy to talk music—admittedly, his life’s addiction. But if Questlove is any measure, we should all find such joyful habits. It all went like this: 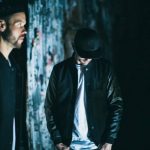 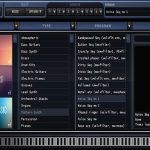