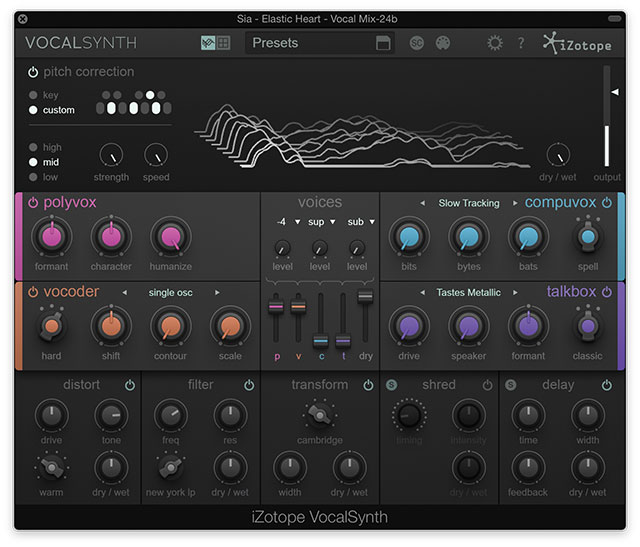 Since the 1970s, artists and producers have been looking to create interesting vocal treatments using various technology solutions, broadly known generically as vocoders (though the term applies to one specific technology). Through the ’80s, ’90s, and through to today, manipulation of vocals (or indeed other audio sources) with various distortion or coloring tools has become a feature of numerous tracks across numerous genres, either as a central element, or occasional audio seasoning. Indeed, most DAWs incorporate various tools to produce some of these effects.

But the engineers at iZotope—famous for their audio plug-ins, including the Ozone mastering tool suite—recently decided to see if they could bring a new spin to this type of manipulation, and broaden the toolset of producers constantly on the lookout for new sounds and new techniques. The result is the recently released VocalSynth.

VocalSynth goes beyond the vocoder alone to include a voice generator, Compuvox, and Talkbox effects as well, packaging them in an easy-to-use format with an approachable interface that pros and amateurs alike will find fun and effective.

One of the key benefits of VocalSynth is its auto mode. My own DAW’s internal vocoder workflow involves taking an audio track (usually a vocal), creating a synth track with MIDI programming (usually with the notes matching the melody, unless you’re going for different effects), and then side-chaining those through the vocoder plug-in. With VocalSynth, you can simply drop the plug-in on a vocal track (or any audio track), and immediately get results thanks to the product’s real-time analysis and internal synths capabilities. Its MIDI mode lets you override the automation and dictate the pitches that VocalSynth’s internal synthesizers are to play, while the side-chaining mode works more like a conventional approach, bringing (typically) a vocal track and separate synth track (instead of VocalSynth’s own internal synths) together through the plug-in.

As mentioned, VocalSynth goes beyond the vocoder alone (although it does that, too, and quite well). The voice generator, called Polyvox, can be used to create vocal harmonies, but with a number of interesting tricks up its sleeve. For serious harmony generation, I found Polyvox to be a bit wanting; the effects are not particularly natural sounding, and seemingly not on-par with iZotope’s own Nectar vocal plug-in. But given the overall purpose of VocalSynth—creative manipulation—it does the job it needs to do here, and then some.

The Compubox effect uses linear predictive coding (LPC) to recreate vocal output that has that unique “speak-and-spell” toy quality. Various adjustments give you a wide range of creative control. And the Talkbox effect—something with which I was previously unfamiliar—emulates a Talkbox apparatus, which routes audio through a plastic tube placed in a performer’s mouth. Their lips control the audio, which when mixed with the performer’s own voice can create some interesting results. The plug-in simulates that, and here, too, a range of controls vary the effect in virtually limitless ways.

But perhaps what’s most responsible for the cool results you can achieve with VocalSynth is the fact that all four of its primary effects can be combined in any amount you wish, allowing for previously impossible results. The product’s presets give you plenty of professionally created starting points that offer up some incredible results right out of the box.

VocalSynth also offers five additional standard effects that can be layered on top—distortion, filtering, transformation, shredding, and delay—providing even more ways to tinker and tweak (and which are also applied in various ways in the presets).

For $199, VocalSynth packs a lot of processing power in one place for the price, and if your production workflow calls for machine-like vocal effects, whether regularly or from time to time, this new offering from iZotope definitely won’t disappoint. 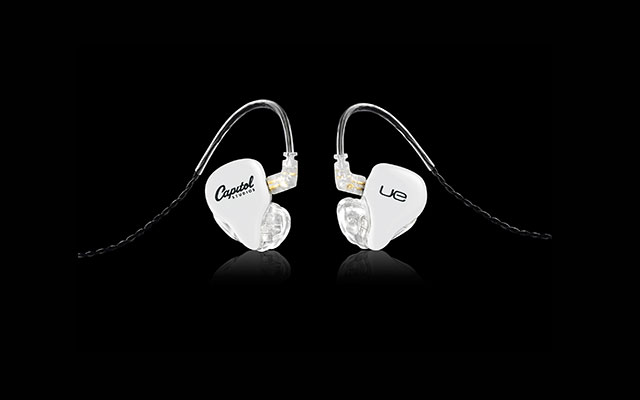 A couple of years back, I first reviewed a set of custom IEMs from Ultimate Ears Pro (UE Pro), its so-called “In-Ear Reference Monitors.” Quite simply, I loved them, and in the two years since, they’ve gone with me everywhere I go: on airplanes when I travel, in my studio, and even during some DJ sets.

If you’re not familiar, custom IEMs have for the past decade or more pretty much replaced floor wedges and other monitoring solutions for touring stage performers. Resembling old-school hearing aids in some ways, they’re not only for singers, guitarists and drummers on-stage, but also audio engineers, producers, and even DJs.

Custom IEMs have not had an easy buying experience, however; you don’t just walk into a store and buy them off the shelf. You have to know (well, guess) what you want; visit an audiologist for ear molds; then send-off the order and wait—and hope you made the right choice. That’s still largely the case, but UE Pro is trying to change that.

At this past January’s Winter NAMM in Anaheim, Calif., UE Pro had a very visible presence, and to some degree, this was at first a bit of a surprise to me. After all, at the end of the day, NAMM is a retailers’ show, and last I knew, UE Pro wasn’t a retail product. But that is, however, what the company is trying to change. On the show floor, UE Pro was trying to get anyone and everyone to take a seat and have their ears scanned. Yes, scanned—and therein lies the center of the company’s retail strategy. More on that in a moment.

The 3D imaging system that the company was using on the show floor for ear scanning was developed by another company, but UE Pro has an exclusive license to use it in the music market. The company hopes to interest retailers in adopting the technology, having personnel trained and certified by UE Pro to use it, and provide retailers with the ability to sell custom IEMs—while at the same time removing the need to have those potentially expensive ear molds taken.

In addition to the scanning solution, UE Pro’s retail strategy includes the ability to demo their products for the first time before buying. The company now has available demo versions that dispense with the custom fit in favor of disposable ear tips. This allows potential buyers to try the various IEM models in-store, and choose one based on something a bit more objective than comparing specs on a web page—which was pretty much the only option previously.

At NAMM, I had my ears scanned using UE’s new technology. It begins by donning an alignment device that resembles nothing so much as a pair of headphones from which the actual cans have been removed. It provides a fixed reference point for the scanning device itself, which a UE Pro employee wielded, with its display screen, trigger, and probe-like business end. As he moved the scanner in and around my ear, I could see the 3D scan painting on the computer screen in front of me in real-time. It was… weird, but cool!

I quickly received the results of the scanning: a pair of the company’s new, updated UE Pro Remastered IEMs. (Typical order turnaround is approximately one week; not bad for a custom manufactured product.) These replace the previous version I had before, and the price point is the same: $999. As before, they’re a collaboration with the famed Capitol Studios, and they even carry the Capitol logo on one of the two monitors.

Compared to my earlier UE Pro custom IEMs (made from audiologist molds), the fit was nearly identical: snug, but comfortable, proving the efficacy of the scanning approach vs. mold-taking. The “Remastered” version of the IEMs has a number of changes over the original Reference Monitor IEMs; while still using a trio of balanced armature drivers, the updated model incorporates a silicone waveguide to ensure proper phase alignment. Frequency response has been expanded some on the high-end, while input sensitivity is slightly reduced, requiring a tad more gain.

As before, I find that the IEMs are amazingly good at revealing defects. Poor mixing, poor mastering, the negative effects of audio compression, and many other flaws suddenly stand out like a sore thumb, as they say. But that’s really the point: when used in a studio setting, you want to be able to hear what’s wrong in your mix, and trust me—if you’re anything like me, hear it you will with these custom IEMs. As I said in my original review, I was able to isolate and fix problems in my own tracks that I simply didn’t (or couldn’t) hear before.

After using custom IEMs for over two years now, I can say flatly that I wouldn’t be without them, and the newly updated UE Pro Remastered model only reinforces that feeling. Given the price point, it’s most definitely an investment, but a worthwhile one in my view. While I have a perfectly suitable studio, a pair of nice monitor speakers, and no worries about waking my neighbors with the sound cranked up, I still use my UE Pro IEMs to check my work in-studio. I also find huge value in being able to take my laptop (complete with all my studio software) wherever I go, knowing I have a solid monitoring solution along for the ride—even if it’s in a hotel room at 2 a.m. As for the ability to listen to music on-the-go from my iPhone with optimal accuracy and fidelity? Well, that’s just a bonus. 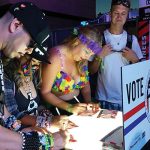 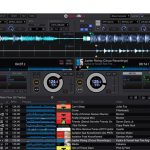 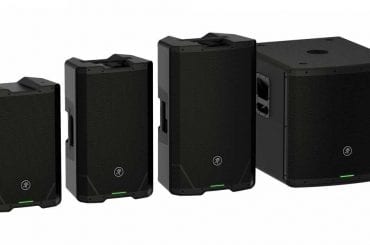 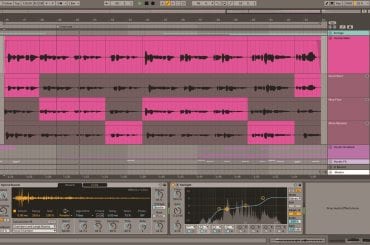 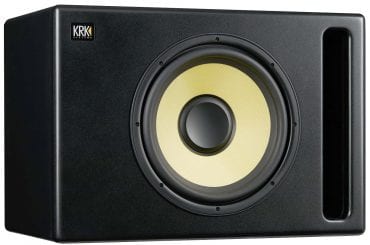