At the moment I’m writing this article, I find myself just weeks away from making January travel arrangements for Anaheim, Calif., to attend the 2017 Winter NAMM show.

Where does the time go? It seems like only yesterday I was taking in everything new at NAMM 2016, including the new WS100 wireless mic from Numark—which recently hit store shelves after the company spent some time finalizing the product and its various regulatory compliance requirements.

First Impressions: I’d never had a chance to play with the previous iteration of the NV series, so I wasn’t entirely certain what to expect when I opened the NVII’s box when it arrived. But as an upper-mid-priced Serato controller (retail price is in the $700 neighborhood), you could say that the NVII is more or less what I might have expected at the price point—a relatively compact, but full-featured, light, portable controller with a robust feature set.

It’s hard not to notice what is perhaps the NVII’s strongest selling point: A pair of 4.3-inch, color-LCD displays, one on each side. As with other members of the Numark family (as well as its fellow inMusic brand, Denon DJ), these displays provide on-controller visual feedback and interfaces to the underlying Serato software, that taken together, reduce the need to focus quite so much on the computer screen. Each of the displays is surround by knobs and buttons that are used to interact with the displays (and in turn, with Serato).

Beyond the displays, however, what you see on the NVII is all the usual stuff; two large rotary encoders (jog wheels), and various buttons, knobs and sliders that put you in command of the capabilities that Serato has to offer.

Numark’s press materials call out a few new changes in the NVII over its predecessor, including updated aesthetics, and improvements to the functions and interactions provided on the integrated displays, making it easier and more intuitive to leverage their capabilities.

Set-Up & Use: Reflective of the market position of the NVII, its connectivity is perhaps what one might expect. The XLR connectors on the back for master outs are particularly appreciated; RCAs are also provided for the master, and a separate pair for booth outputs. Also on the back side are a ¼-inch mic input, and RCA stereo aux inputs.

The mic and aux inputs are perhaps not as flexible as one might expect. You can switch one or the other in line—not both—and they are completely separate from the other tracks. Indeed, through gain knobs, they’re patched straight through to the master out, making the aux input suitable primarily for an emergency audio source (vs. something you would mix into your DJ set). And while a single mic input is probably sufficient, but it reduces flexibility for mobile DJs. Bottom Line: The focus here is really on your digital, Serato-based source material.

For Serato DJ, however, the NVII provides full, four-deck support. The toggle for the displays between the 1 and 3 decks (left) and 2 and 4 decks (right) is a single, oversized button, making it easy to juggle the four sources across the two displays. Faders and EQ, of course, are dedicated (i.e., four separate sets of controls).

As a Serato user already, all that was necessary to play with the NVII is to do a quick software update so that the software recognized the hardware. New users can fetch it through a quick and painless Internet download; installation is simple and straightforward.

With the intuitive and expected physical layout, and my familiarity with Serato, I was mixing a competent set within just minutes of the unboxing of the unit. The way that effects are handled in Serato, plus an approach that has become pretty customary in Serato controllers for manipulating those effects, I was even dropping in some basic seasoning in a way that was easy and natural.

I have to say I liked using the jog wheels on the NVII. Numark claims that these touch-capacitive jog wheels “learn” your style of use and adapt dynamically. I can’t vouch for the veracity of that statement, but I can attest to their responsiveness and ease of use in my own sets performed on the device.

Cue points, loops and the like are also manipulated in a pretty standard way that will likely be familiar to many Serato users who’ve had controllers in the past—the NVII uses a 2×4 matrix of multifunction pads.

While I do love the displays on the NVII, and found them quite useful—as I said earlier, it minimizes the need to keep looking at the computer screen for so many things—perhaps the sole disappointment in the NVII is that they didn’t do more. Numark cleverly mapped some Serato functions to the buttons around the displays, such as keylock. But for the most part, you use the buttons to control sorting of tracks, to toggle the display mode, and if desired, to browse your music collection and load tracks in the decks.

Speaking of, this is one of the new capabilities in the NVII: You can easily toggle the third display column (in library browse mode) to show key, BPM, or track run time. As someone who extensively uses Camelot key notation, this is particularly appreciated, as is that sorting ability when you want to find a compatible track to mix in.

After playing with the NVII for a while, I find that it has a nice feel that’s pleasant to use. Its thin profile and light weight make it amenable to easy, über-portable gigging. Paired with one of today’s lightweight laptops, you certainly wouldn’t strain your shoulder carrying everything you need to perform a competent DJ set in a slightly oversized backpack case.

Wireless on a Budget: For years now, I’ve used wired microphones for my mobile gigs, carting around a pair of pretty industry standard, built-like-a-tank dynamic hand mics. They take abuse, they sound great, and they’re easy to set-up, but dealing with mic cables can indeed be a pain, and I’ve occasionally even gotten the dreaded, “Don’t you have any wireless mics?” question from clients.

What’s kept me from making the investment? I just haven’t gotten myself to bite down on the price tag of conventional wireless systems. Well, that recently changed.
As I said in the intro, Numark was showing the WS100 wireless-mic system back at Winter NAMM 2016. It’s taken time to finish up the product and get it to market, but it’s available now, and I have to say, it was worth the wait. 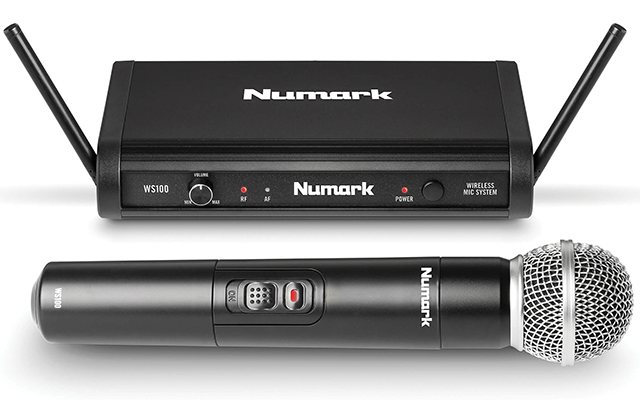 Let’s get the main “feature” out of the way: It’s priced at about $100—a price point that virtually any mobile jock can justify. For that price, you get a really competent, single-microphone wireless system that just plain works.

Make no mistake—this is a no-frills solution to wireless mic needs. You can use a single mic and single receiver at once. There are no frequency setting capabilities. No tuning, no adjustment; plug and play is the way here. The system consists of a single-receiver unit that’s pretty much just power, gain, and output (both mic and line level are available), and a single handheld mic with an on/off switch. Connection is quick and simple, and since the mic uses standard AA batteries, it’s easy to keep juiced up.

The mic itself is made primarily of plastic, so this is not something to let your wedding party use for a literal drop-the-mic moment. But the upside here is that you get a solid, clear signal with great sound. Along with it, decent range. I tested it from the farthest two points in my house (with someone walking around talking and holding the mic), with no interference, no static, and no dropouts. And at a recent wedding gig, it covered the entire venue, and even after using it the entire evening, its batteries were still going strong.

As a bonus, the entire set-up comes in a durable plastic carrying case that’ll keep everything protected as you schlep it from gig to gig.

Conclusions: The new NVII Serato controller from Numark provides a strong set of capabilities that cover everything the working DJ needs to perform a competent DJ set, and that take full advantage of virtually everything the Serato software has to offer. Its approximately $700 street price will still represent an investment for most potential users, but for the price, you get four-track support, intuitive access to Serato’s effects, various other performance controls through the unit’s trigger pads, and of course, a pair of full color displays that help make DJing with the unit easier and more intuitive.

And Numark’s new WS100 wireless mic system is just the thing for mobile DJs and others on a budget, who want the flexibility of wireless without having to make the steep investment in a traditional high-end system, and who don’t need to support multiple wireless mics. In short, there’s now no reason not to have a wireless mic in your mobile DJ toolkit. 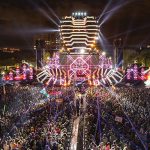 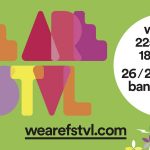 We Are FSTVL Unveils Phase 1 2017 Lineup