It’s best not to give Teije van Vliet too many options, otherwise the Dutch producer (aka Lenzman) will end up not making any choices at all.

This applies to him in every aspect of life, particularly in making music. Limitations are, in part, why van Vliet has been quick to release two lengthy EPs on his label, The North Quarter. His most recent, Earth Tones is 10 primarily collaborative tracks, both vocal and instrumental. This follows the 10-track All For You EP, which marked the launch of The North Quarter late summer 2016.

The establishment of The North Quarter—which follows a fruitful time as a longstanding artist on Goldie’s Metalheadz for van Vliet—allows him to explore a broader scope of music, while staying tethered to his drum-n-bass roots. Earth Tones takes the already soulful vibes of All For You even deeper, with slight references to van Vliet’s hip-hop upbringing. Steo hum-sings over the moody shuffles of “Tender Love” while “Park Hill,” the collaboration with Jubei, harkens to the start of the liquid sound with a chest-rattling sub-bass, and IAMDDB’s smooth tones slide over the slick rhythms of “In My Mind.”

“To me, it’s not really a genre thing, it’s a sound thing,” says van Vliet from his home in Amsterdam. “It’s not about tempo so much as it is about what kinds of emotions it evokes. I’m trying to do soul music at a different tempo to what the standard is.”

As expressive and emotive as van Vliet’s productions are, his set-up, which is in his home, is very basic. His MacBook runs Propellerhead Reason 8, the DAW he has been using for many years. He has a MIDI keyboard and a microKorg that he uses for writing. Mackie monitors and a SubPac M2 wearable sound system—his favorite piece at the moment—round out his sound-treated studio room.

“I enjoy the writing of the music, but not the technical side of it as much,” van Vliet admits. “Collaborating with people in the same room, I feel so self-conscious. I’ve worked with super-technical guys in the studio. I get bored really quickly with previewing hi-hats and snares and tweaking and endless processing. For me, it’s more about the musicality and what the music makes me feel when I listen to it, not so much how good it sounds. I understand and appreciate music has to be well-produced to be able to compete. Especially in today’s landscape, drum-n-bass is very competitive in terms of production values. I’ve just about managed to keep up, but it’s not where my interests are.”

Even with his limitations, van Vliet gets a wonderfully warm sound from the cross-section of vocals he uses in his songs. EQing takes care of clicks and pops and de-essing is essential, as he presses all his releases to vinyl and the sibilants can cause problems with that. The vocals are compressed, particularly as his vocalists, most of whom are recording remotely, have a difficult time keeping the same volume all the way through. Additionally, van Vliet makes two layers of the same vocal, panning one slightly left and the other right to get a wider vocal in order to get it broader in the mix, all the while keeping the frequencies of the vocal clear.

“I’d like to get into the plug-in game,” says van Vliet, who either samples his sound sources and chops them to bits or plays them himself. “Reason doesn’t allow any non-native plug-ins and there is so much to gain from being able to manipulate samples—I have seriously thought about switching over to Ableton. But then, the plug-in thing is endless. When you have 15 screwdrivers, you’re spending all your time deciding which one to use. When you’re painting, if all you have is blue, red, yellow, mix them up and come up with a nice shade with what you have. Sometimes when you’re limited in your choices, it allows you to really write and get down to something. With music, if you have too many plug-ins, which one’s going to be the best delay? With Reason, you’ve only got one, so I use that.”

This applies to the music van Vliet loads onto his USB as well. Although he is known for the liquid side of drum-n-bass, that hasn’t restricted his DJ bookings. He could be playing in between two jocks that play a lot harder, or he could be headlining a party where he is the gentlest of the selectors. Even so, he keeps his choices to 200 or so tracks, organized in key, and based on research he has done on the audience to whom he is playing.

“I can’t cope with endless choices, sometimes if you have much, it makes everything less important,” he says. “I try to represent the music I like and make and release as much as I can, but at the same time, you have to be a little flexible with reading the crowd. I was DJing a long time before I was making music so to me, it’s definitely important, and an art form. You’re dialing a frequency and trying to connect. Sometimes it’s really fuzzy and sometimes you get clear reception. I’m always dialing; sometimes I get that clarity right at the start and keep it all the way through, sometimes all night long. It’s can be a real struggle. The challenge of that is something I enjoy from DJing.” 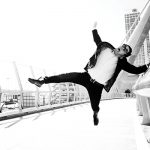 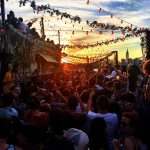