There exists this destructive myth amongst the DJing and electronic-music communities that equipment is everything. It goes that, in order to be a successful performer, a DJ/artist has to have the latest and greatest gear, which is often the most expensive.

Every once in a while, a piece of gear comes along that radically challenges this commonly held belief. It usually offers the features of significantly more expensive and higher-end gear, all the while delivering them at an attainable price point. Such is the case with Pioneer DJ’s DJM-450.

Rarely do I get this excited about a 2-channel mixer. But the DJM-450 improves dramatically from Pioneer DJ’s previous 2-channel mixer range, which, unless they were upmarket scratch/battle mixers (DJM-909, T1, and S9), rarely pushed the envelope in terms of features provided, and never came close features-wise to Pioneer’s 4-channel mixers. This trend seems to have changed with the 450, which offers a significant portion of the effects and control found on Pioneer DJ’s club-standard mixer, the DJM-900NXS2, while pricing competitively to other similarly-equipped 2-channel mixers at $699.

Unlike previous Pioneer 2-channel mixers, the 450 offers DVS control through rekordbox (Pioneer’s own DJ software), with either turntables and rekordbox control vinyl or CDJs running a downloadable rekordbox control tone or control CDs through the included license. 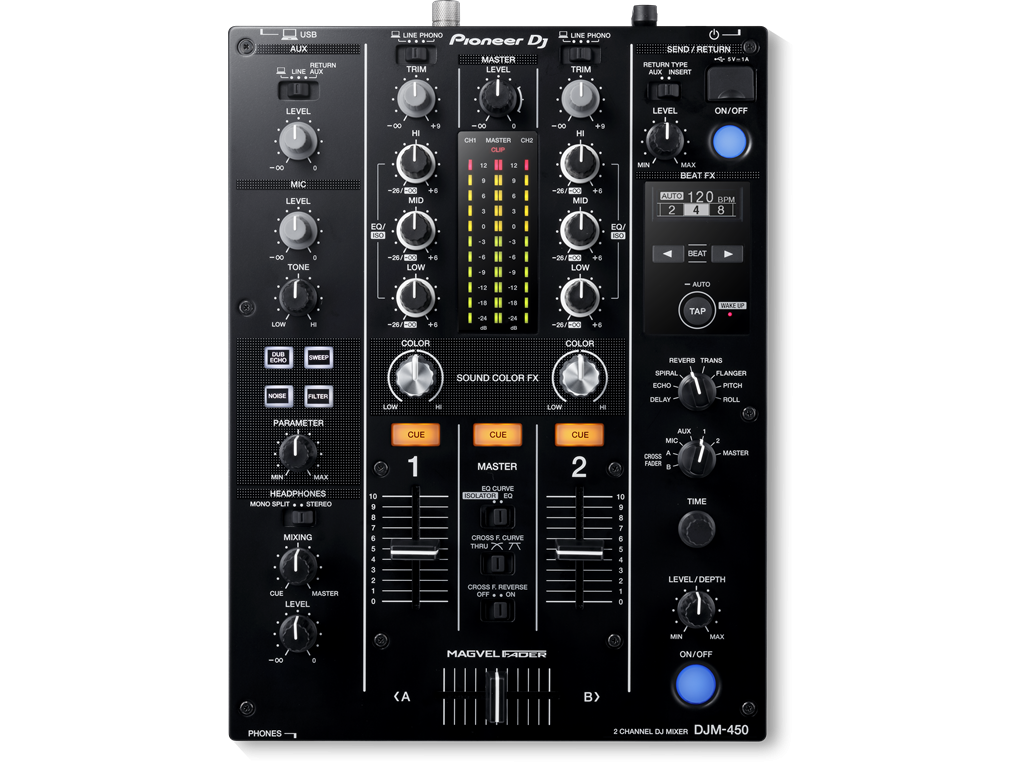 Upside: The successful emulation of Pioneer’s 4-channel mixers in a 2-channel form factor with many of the features of Pioneer’s larger equipment.

Issues: The lack of TRS outputs and a dedicated booth output. The lack of MIDI control native to any software. A three-position crossfader curve control, as opposed to a full range of adjustability with a knob.

The Hardware: The DJM-450 mixer features a rugged and durable full-metal construction that seems on-par with the build quality found on larger Pioneer mixers. Side-by-side with the larger DJM-900NXS2 and CDJ-2000NXS, the 450 feels considerably smaller. The knobs feel solid, playable, and seem like they will last through the rigors of regular use. The channel faders feature Pioneer’s hallmark P-lock fader caps and offer reassuring levels of resistance.

The crossfader is the MagVel fader found in the larger DJM-900NXS2, and feels wonderful to use. We compared it to another Pioneer mixer without it as well as the crossfader in a rival 2-channel mixer, and the MagVel fader felt amazing to use, offering a smooth and precise operation. Scratch DJs will feel confident in their ability to scratch, cut, and beat juggle with this fader. Pioneer DJ claims that the fader will survive well over a million cycles without any loss of quality, but we obviously couldn’t verify its claims.

The character of the sound can be altered with the full-band EQ section (low, mid, hi, with trim), the four sound-color effects that operate only on the two channels, and the assignable effects section featuring a selection of effects taken from the DJM-900NXS2. At the front of the unit, DJs will appreciate both a small and large headphone jack, meaning that a headphone adaptor isn’t a necessity.

On the rear of the unit, the DJM-450 features two RCA line/phono channel inputs with a ground pin for turntables, an AUX input on line-level RCA inputs, an RCA master output, an XLR master output, balanced mic input with tone control, and a USB input for rekordbox DVS control.

Some DJs have lamented the lack of a dedicated control for an individual booth output, meaning that DJs cannot control booth monitors at a separate level. DJs who use in-ear monitors will have no problem, given that the headphone control has a wide level range and can switch from master, cue, as well as mixing outputs.

Sound Quality: As far as sound quality is concerned, the DJM-450 sounds great with a sound characteristic that Pioneer DJ users will instantly recognize. On studio monitors, the 450 sounded virtually identical to the 900NXS2 we had set up next to it when playing both lossy and lossless tracks. That’s an impressive feat for a mixer costing nearly a fourth of the club standard!

The Effects: In terms of effects and control, the DJM-450 felt light years ahead of previous Pioneer 2-channel mixers like the DJM-250, DJM-350, and DJM-400. While those mixers offered only basic effects, like channel filters and not much more, the DJM-450 offers four of the six sound-color effects found on the club-standard 900NXS2, as well as the parameter control that allows users to further control any active sound-color effect.

The traditional DJM effects section is located to the bottom right of the mixer and offers a “greatest hits” effects selection from the 900NXS2. Although not offering all the effects from the larger mixer, those offered sound really good and far surpass comparable effects by rival mixers. Furthermore, throughout our time with the DJM-450, we never felt like we needed more effects to enhance our user experience or have more control.

I feel that Pioneer’s choice in the effects to include was superb. Each of the effects can be assignable to either individual channels, the master output, the crossfader, the mic input, or the auxiliary input. The effects are triggered in a similar fashion as on the full-size Pioneer mixers by a button located towards the bottom right of the mixer that activates the effect. The level and time of the effect are controlled by rubber knobs directly above the on/off button.

The DJM-450 also offers the same effects screen as in the 900NXS2, but lacks the touchpad for controlling timing of effects – nonetheless, not a major omission. DJs wanting to use more effects can always connect an external effector, like the RMX-1000 or RMX-500, through the included send/return feature, something found on few mixers at this price. It also features a USB port on the top of the unit, eliminating the need for a send-return connection with Pioneer’s own effectors, as well as an iPad running the RMX-1000 app.

Conclusion: By offering control found on the DJM-900NXS2 and rekordbox DVS, the Pioneer DJ DJM-450 becomes an exciting new mixer and should be on the shortlist of anyone considering a new mixer. Any DJ familiar with Pioneer equipment will feel right at home on the new mixer. Conversely, users who want to become familiar with Pioneer DJ’s club-standard mixer should seriously consider the 450, given its appealing street price of $699 and feature set similar to that of the larger 900NXS2.

Having one in your bedroom set-up will allow you to practice and become familiar with Pioneer DJ’s mixer range. Previously, DJs wanting to practice on mixers similar to the Pioneer’s flagship mixers had to purchase a 4-channel mixer, but now there’s a 2-channel alternative. Buyers of the DJM-850/800/750, who don’t need the four channels, can now purchase a 2-channel alternative that still offers them the ability to familiarize themselves with Pioneer DJ’s club-standard mixer range. In smaller spaces where booth sizes might be restrictive of a full 4-channel mixer, this will easily fit, and DJs who want more space in tighter booths, should also consider this enticing mixer. 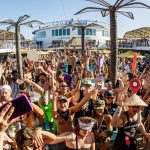 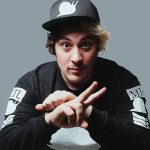 Snails Closes Out The Year With New “SNAILED IT!” Mix