But this one — the PRIME GO — is just a little different, a little envelope-pushing, and whole heck of a lot of fun.

So, why so much from Denon DJ? It was apparent back at the Winter NAMM show this past January that inMusic — parent company of Denon DJ, as well as DJ brands Numark, Rane, and (as recently announced) Stanton DJ as well — was investing in the DJ market in a very big way. But then, that’s been apparent since they started collecting DJ brands like some people collect sports cars. At NAMM, however, the company focused on Denon DJ for its splashiest announcements, namely how it was extending its successful PRIME family into two new market segments, first with the previously reviewed PRIME 2 (which the company prefers to call a “smart console”), and second, with the subject of this review, the PRIME GO.

While the PRIME 2 was Denon DJ’s attempt to bring the PRIME experience to DJs at a slightly lower price tier, the PRIME GO (I would argue, anyway) is less about establishing a foothold at a lower price point, and more about carving out an interesting niche — and claiming it for themselves.

To be honest, when I opened the box of the PRIME GO, I was expecting a PRIME controller that was “yet even smaller” and little else. Judging by the size of the box and its light weight, I was also expecting a lot of compromises, a lot of features to be stripped out, and to be sort of yawning by the time I plopped it on my review desk. I was in for a surprise on many levels.

Yes, the Denon DJ PRIME GO is small; it’s just over 16-inches wide, under 11-inches deep, and stands just 2-inches or so off the desktop. It’s slightly chunkier than I expected; right about 8 pounds, in fact, which is neither that heavy, nor that light. But I would soon learn why that is: a battery. It didn’t really click until I plugged the unit in to AC power, and noticed that there was a battery-charging light illuminated, that the PRIME GO has the word “go” in its name for a very good reason: there’s a rechargeable lithium-ion battery is lurking inside, ready to support a brand-new set of use cases — use cases that at the moment, only the PRIME GO can support.

Imagine jumping into an Uber or Lyft for a ride to your next gig and organizing your crates for the evening’s set while in the back seat on the way there. Or perhaps kicking back poolside, umbrella-adorned cocktail nearby, setting up cue points for some new tracks, or practicing some mixing techniques, with nothing more than the PRIME GO, a pair of headphones, and your tracks on a USB key. These are the sorts of situations for which the PRIME GO is made. And sure, if you want to set up your DJ booth at a party with no power nearby, that might be a possibility, too – although the four-hour battery life may limit you.

But it’s not just the battery. Denon DJ has equipped the PRIME GO with its latest Engine OS software, which you access through the unit’s gorgeous 7-inch touch screen. It has the same multi-touch support that the others in the PRIME series provide. You even get internet connectivity (wired or WiFi) right on the unit, which at press time gives you the ability to use the Tidal streaming service, with other services promised for the near future.

While the jog wheels are, as you would expect, downsized considerably, that’s one of the few compromises on the PRIME GO. You do have dual mic inputs, making it particularly useful for the mobile-DJ market; you get full XLR master outs (and RCA as well) and separate booth outs (in ¼-inch), which means it’s designed for pros. There’s an aux input available. You also get a nice set of effects to use, along with both high/low filter and a “wash-out” effect, what Denon DJ refers to as “sweep effects,” which can be individually applied to each of the unit’s two channels and controlled with a single knob. And for media, you get a single USB slot on the back, and an SD slot on the front. 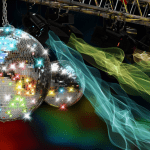 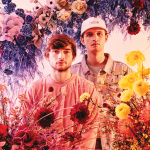 Louis The Child: Here For Now