After lighting up the airwaves earlier this year with his colossal collaboration “Pomegrante” with The Neptunes that came as quite the pleasant surprise, deadmau5 looks to close out 2020 strong with the release of “Bridged By A Lightwave” featuring Kiesza.

Making an appearance during his cubev3 live shows and being premiered on SIRIUSXM BPM, “Bridged By A Lightwave” serves as a true vocal-driven musical journey that is simply flawless in terms of production.

“deadmau5 and I used to endlessly run into one another at festivals and always talked about working together one day. I think we talked about it for at least four years before we actually finally got down to business. I have Joel’s beautiful wife Kelly to thank for holding us both to our word. She has always been a huge supporter of my music and never let us off the hook for committing to work,” says Kiesza.

“Finally, one day he sent me a track to write over. I wasn’t proud of my initial ideas and being a big fan of Joel, I was determined to give him my absolute best work. One night as I was heading to Norway from the UK to mentor music young students, my taxi hit a massive traffic jam and I soon realized I wasn’t going to make my flight. We were at a standstill for almost an hour before we began inching toward the airport. But as I was sitting there peering out the window, like magic, all of a sudden the entire song just appeared. I pulled out my phone as fast I could to capture the words and they flew in. It was as if someone was threading the song into my mind from another dimension. By the time I finally arrived at airport, my flight had long departed, but ‘Bridged By A Lightwave’ had landed in this ‘3D place.’”

Take a listen to their mesmerizing new tune “Bridged By A Lightwave” below. 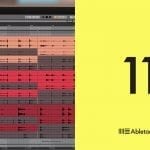 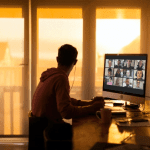