After several iterations, Numark’s Mixtrack range of controllers have enshrined themselves as impressive DJ controllers for beginner, advancing, and skilled DJs. Now, a decade since the release of the original Mixtrack, Numark has added two new flavors of Mixtrack to their range: The Mixtrack Pro FX and the Mixtrack Platinum FX.

By today’s standards, the first-generation Mixtrack controllers – which had two channels and touch-activated jog wheels – might seem relatively basic. But, make no mistake, they were instrumental in introducing legions of DJs to the world of MIDI controllers and made it possible for many individuals to experience DJing for the first time.

Midway through 2020, Numark introduced the Mixtrack Pro FX and the Mixtrack Platinum FX. As the FX in the names suggests, these two new controllers add exciting new features, especially in the effects department. Form-factor-wise, the two controllers share a lot in common and continue the long and wide stance found on current versions of the Mixtrack range, and both controllers have dramatically expanded effects sections. On previous Mixtrack models, effects are controlled by buttons on each individual deck section. However, on the Mixtrack FX models, effects are controlled by a single effects section located in the center of the mixer, which is similar to the layout on the Numark Scratch battle mixer.

The centerpieces of this new effects section are two springy paddles that trigger effects – pulling them down activates effects temporarily while the paddle is pressed, and pushing them up locks in the effects. Above the paddles are buttons to activate six different software-based effects – high-pass filter, low-pass filter, flanger, echo, reverb, and phaser. Above the buttons for activating the individual effects is a wet/dry knob, a rotary knob to change the number of beats an effect repeats for, and a button for manually tapping in the tempo. I especially appreciated that the effects were post-line fader and post-crossfader, which opens the door for various effect-laden transitions.

In my testing, the screens are sufficiently well-lit, even in low-light environments. They did take some getting used to, but after a few minutes of practice, I was able to quickly read them. On the Platinum FX, 4-channel functionality can be activated by holding shift and a button on the bottom right of the jog wheels – this triggers the additional decks. In my opinion, the screens are definitely a worthwhile feature to have, but I could easily live without 4-deck control, especially when I don’t have four dedicated channels on my mixer.

On both controllers, each deck section is identically laid out: in the center, there are large 6-inch jog wheels (on both models, the jog wheels are equally sized) and, at the bottom, there are eight rubber performance pads, transport controls, and looping controls. The pads control cues, auto loops, and the sampler. They also control a new mode called “Fader Cuts” – this feature acts like a gate and cuts the track in and out, much like how a scratch DJ would manipulate the crossfader. It was an interesting feature and allowed me to layer effects on top of my scratching since my normal crossfader hand was now free.

The center mixer is logically laid out and has two fully-featured channels: each channel has a 3-band equalizer (treble, mid, and bass), high/low-pass filter knobs below the 3-band EQ, and trim controls at the top of each channel. The line faders have a fair amount of resistance, and the crossfader feels really good to use; that being said, I would’ve liked to see a dedicated hardware switch to change the crossfader curve. (Nonetheless, it can be controlled in the software, if needed.) Headphone cueing controls and VU meters are located just above the crossfader and between the line faders. The top of the mixer has a thick browse knob and dedicated loading controls for each deck. Double-tapping the load buttons triggers instant doubles.

Located on the front of both controllers are a 1/8-inch and a ¼-inch headphone jack and, on the back, there is a master output on RCA, a USB Type-B port to connect the controller to a laptop, and a ¼- inch microphone input. Both controllers are built with solid and durable-feeling plastic cases, which make them both strong and lightweight. Chunky rubber feet at all four corners hold the controller in place.

In use, both the Mixtrack Pro FX and the Platinum FX feel great. The jog wheels on both controllers shine. At 6-inches, they offer ample room and are superbly weighted. These jog wheels wouldn’t feel out of place on DJ controllers costing much more, and it’s really impressive that they were able to be included on controllers at this price. Both units come with Serato DJ Lite and are compatible with Serato DJ Pro.

To me, these seem like really good controllers for DJs wanting to make the transition from DJ software alone or smaller DJ controllers to a more-advanced, intermediate DJ controller. Additionally, I could also see these – especially the Mixtrack Platinum FX – being purchased by experienced DJs as a secondary set-up for smaller gigs or as a bedroom/portable practice tool.

However, both are fine choices for DJs wanting a controller that offers advanced features – such as paddle-driven effects – while elevating the essentials. Well-done, Numark. 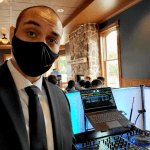 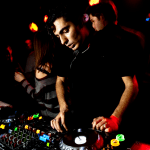 Omid 16B: Past Is Present