So, we sent out our “Coronavirus Questionnaire” to DJ/producers from all musical genres to find out. During this period, DJ Times will continue presenting the questionnaire responses from talented music-makers from all over the world. Here’s our latest entry, this time from the U.K., the London-based house-music talent Sammy Porter.

What’s it like where you’re living? How did you spend most of your time? Been a weird one here in the U.K., in and out of lockdowns since March last year. Full-scale clubs and festivals had been off since then. Can see some light at the end of the tunnel now for a few weeks’ time for bigger events to kick back off. Although our government have done a right good job of moving the goal posts, especially for the nightlife industry. We have had three lockdowns since ’rona hit last year. The first one I didn’t mind too much, gave me some time to catch up on about a million unopened emails and unfished Ableton projects, but the other lockdowns dragged bad. Grey skies/rain in the last lockdown wasn’t the best, but spent most of the time building a studio in my loft. Felt like I’ve re-trained as a DIY builder the past year.

Did you lose important gigs, or income-producing work? Ah, so much of it… if I explained fully, I think id cry. Aside from every gig I had booked in for the year, we had to cancel some large-scale events and festivals that I helped organize with the record label that I run.  Heart-breaking to work on something for over a year and see it fall to pieces, but we’ll be back as soon as we are allowed.

Are you doing anything now that can or will produce music-related income? Have you learned anything in the downtime? Learned so much this year, probably more this year than four years at university and the rest of my combined time in education. I set up a live-streaming company as soon lockdown first hit, so was suddenly out helping brands do some online events, while real life ones couldn’t happen. Being honest, I had almost no little idea about anything to do with live broadcast to start with, but learnt on the job and was suddenly balls-deep in live-streams in no time. Also, I had more time to really work on production techniques. I’m a plug-in hoarder, got hundreds of VSTs that I had no clue how to even use before lockdown. It gave me some space to master one or two.

What are you doing now that’s ultimately constructive to your music life/career? For example, any releases during this period? My latest release is my remix for Aviella’s “Downtown Love” on Dim Mak. Plus, did a remix for Todd Edwards’ “The Chant5” on Undisputed Music. Been busier than ever with remixes, so got a nice stream of them lined up. Sat on so much club music that I’m dead eager to get out, just want to be able to road-test a few of them first.

In the studio, what’s your set-up? I’m an Ableton Live guy – by far, the most fun way of making music with ease. Reminded me of when I first opened “Music 2000” on the Playstation 1, so stuck with it… unless I’m comping vocals, then I go to Logic. VST-wise, I use a lot of the Roland Cloud stuff, TAL 101 Bassline, Omnisphere, all the go-to FabFilter stuff. Saying that, I’ve made a lot of stuff just using the Ableton stock plug-ins. I’m pretty sure people have made No. 1 smash hits with absolutely no plug-ins. You don’t need the million-pound studio to make a banger anymore. Never really got too far into the hardware world. I still want to be able to get on a plane and work on a project – when we are allowed to get on a plane again! – rather than forget to bounce all the hardware synth stems, which I know I would do.

What’s your creation process in the studio? If you make 10 things, nine might be dead, but one might be good. It’s a numbers game for me. I’ve spent days working on something, and then just binned the lot. Not everything works out – you do get some that bang. Some people start with a vocal, some with drums. I think it’s more important just to start and see where you go.

What’s your typical DJ set-up? I came from doing complete multi-genre gigs, trying to carry around boxes and boxes of records to some questionable private gigs. Got into Serato early, so I moved onto playing with CDJs and a laptop. Was such a headache carrying that much stuff around all the time, so I moved onto rekordbox USBs and CDJs pretty quick. Best way was to keep it simple. Nothing worse than someone pouring a nice cold beer over your DJ Macbook or a lovely person stealing it all from your car on the way home from a gig.

What’s the most surprising thing you’ve realized during this period of social distancing? Without getting too political, I never thought the media could divide people and control their actions and behaviors in ways that I never thought was possible. Also, they use the word “unprecedented” way too much. I also realised I don’t need to spend 4 pounds on a Starbucks coffee three times a day to function – that was a real surprise!

Have you done anything online recently? Have you seen any DJ video streams that impressed you? During the last lockdown, I did a weekly live-stream with the LoveJuice brand to keep some of our ravers entertained. It turned into a half-comedy show with people joining the live, winning stupid prizes, festival tickets, the lot. Wasn’t too serious, but then I think the best live-streams I’ve seen have been the less serious ones. Although looking at some of the Stateside and more EDM live-streams, some U.S. artists have done it so much bigger than we did here in the U.K. I see some of the EDM guys live-streaming from the fucking Grand Canyon and on top of actual monuments with production set-ups that look like a movie set. Meanwhile, here the U.K., we’ve done more live-streams getting drunk in our kitchens or parents living rooms. Either way, anyone who has consistently live-streamed and connected with their audience, all be it one person or a million, it-s impressive. Opening up OBS and taking the time and effort to stream isn’t an easy feat, especially when you only have to play the wrong major label song for the whole stream to get locked off.

Any theme tunes recommended for the moment? Seeing as dancing was off-limits here in the U.K., a remix I did called “I Can’t Dance” by Loveday – I can’t really dance myself – seemed fitting, as we were told not to dance at any events that are allowed to happen.

Any advice on staying sane & relatively positive through this situation? Everything is 10-times worse at night and nothing lasts forever! 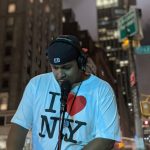 Getting to Know: Mike Márquez 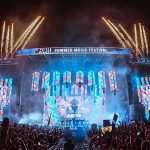