Having just wrapped the first of his two Holy Ship! voyages last week, Destructo is set to launch his Ship2Ship tour this Wednesday, January 14 at Brooklyn’s Output nightclub. Clubgoers can expect a rowdy set from the HARD Events founder, whose West Coast EP was recently released via Insomniac Records. The fun won’t stop there, however, as the rest of the bill is certifiably stacked.

Australian DJ/producer/vocalist Anna Lunoe is sure to drop a bouncy assortment of bass house bombs, hopefully including her recent “Midnight” collaboration with Wordlife. Listen to a recent live set from her Luney Tunes mix series here.Fellow Aussie Motez will also be along for the ride, whose piano-led take on the recent jacking house revival is sure to tear up the Brooklyn crowd. T.Williams will round out the lineup, and he’s bringing the sleek sounds of UK garage that he used to slay Output back when he opened his US tour there this past September.

Dying to head out to the show? You’re in luck, as DJ Times is giving away a pair of tickets to the hot event. All you have to do is enter via the PromoSimple widget below by Wednesday at 9 AM EST for a chance to win two passes to attend. Tickets are available at OutputClub.com.

RULES: YOU MUST BE 21+ TO ENTER, AND BE ABLE TO PROVIDE YOUR OWN TRANSPORTATION TO OUTPUT. TICKET PICK UP INFORMATION WILL BE SENT TO THE WINNER ON JANUARY 14 VIA EMAIL. No purchase necessary. The voting period will begin at 1:00PM EST on JANUARY 12, 2015, and ends at 9:00 AM EST on JANUARY 14, 2015. The winner will be notified that day via email. The winners are allowed to bring ONE companion of their choice. Winners will be denied entry if they try to bring more than one companion. Entrants must use their legal name on the contest entry form as listed on the ID being used to pick up tickets. The contest/event is only open to those 21+ and in New York, NY at the time of the event. Winners must respond in a timely fashion via email to confirm their spot, otherwise their prize will be forfeited. DJ Times will not be held liable for any damage to personal property or injuries sustained while attending this event. Prizes are non-transferrable. While we will never spam you, entering via email gives DJ Times permission to add your email address to its email mailing lists, and to share your email address with any sponsorship partners of this event. 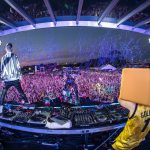