Baltimore, Md. – So, what happens when you mix the “Sport of Kings” with one of the titans of the global-DJ scene? As DJ Times found out this past May 16, you get a smashing success, even if you do get a little wet.

Still, with a forbidding weather forecast, we ventured down to Baltimore’s Pimlico Race Course for the 140th Preakness Stakes and its “People’s Party”—a massive Infield Fest that included a 90-minute pre-race set from one of the world’s biggest DJ/producers, Armin van Buuren.

The B’more equine/trance combo may seem a bit odd at first, but there was nothing strange about the result: A record-setting Preakness crowd saw Kentucky Derby winner American Pharaoh take the second leg of thoroughbred racing’s Triple Crown, while van Buuren fans enjoyed a day-long party. (Of course, three weeks later with a resounding win at the Belmont Stakes in New York, American Pharaoh would clinch the first Triple Crown since 1978.)

Indeed, the entire experience seemed to be in keeping with other mega-events that are looking for an attendance boost by booking top EDM jocks. On May 24 at the Indianapolis 500 auto race, for example, its Snake Pit fest featured Kaskade, Steve Aoki, A-Trak and Caked Up. A different kind of race, but a similar set of festival-sized DJs.

In Baltimore, nearly 132,000 fans packed the 145-year-old race track, with nearly 70,000 crazies filling the infield. With many showing up as early as 8 a.m., the Infield Fest saw legions of gals with natty hats and guys with fratty shorts. By the time the Dutch DJ arrived on-site, most of the Infielders were feeling no pain. Still, it was a far cry from the typical EDM-fest. Fans who bought $70 Infield Fest tickets were given a commemorative Preakness mug and they seemed more filled with suds than anything else. Though the infield got plenty raucous, it was certainly a different kind of mid-day delirium—more college party than rave.

The night before the race, van Buuren played at new Las Vegas mega-club Omnia, where he recently launched a residency. After playing his last track, van Buuren left the DJ booth, went straight to McCarran Airport with his tech crew and flew private jet to BWI. After landing in the noon hour, he and his crew were given a police escort directly to Pimlico. And it was definitely needed, as all the main arteries leading to the track began to clog severely by mid-day.

When he and crew arrived, he was met by his U.S. publicist, the Pimlico media coordinator and a small venue-security crew, which was under the capable supervision of Major Mike Singletary. (Good name for a Head of Security, huh?) After quickly settling into the artist trailer, the crew connected with the on-site techs to coordinate the stage’s audio and video considerations.

Meanwhile, van Buuren was taken to the Pimlico stables for a rare, up-close view of the Preakness horses, the very thoroughbreds due to hit the track in a few hours. He met with Bodhisattva owner/trainer Jose Corrales and his family, then took some photos with them and the horse. Even though Bodhisattva was considered a longshot for the race—indeed, the 20-1 horse didn’t end up in the money—he was an amazing physical specimen to behold up-close.

In the stable next to Bodhisattva, however, stood Divining Rod, a 12-1 horse that would later stride through the slop for a surprising third-place finish. (Good thing one of our “smarter” wagers had him to “show.”) When van Buuren, whose wife is involved with dressage competitions back in Holland, eased up to Divining Rod to stroke his mane for a moment, the Bodhisattva owners protested mildly. Of course, he stopped, not wanting any conflict, but we’d like to think van Buuren touched Divining Rod with a dollop of luck.

After returning to the trailer, van Buuren did a meet-and-greet session with fans. Then, he did television interviews with Lowell Melser from WBAL, the local NBC affiliate, and then with NBC Sports’ Carolyn Manno, who did some quick homework on EDM, including the various differences between subgenres. So by the time she was on-air with van Buuren, she confidently introduced him to the national audience thusly: “We are backstage with world-renowned trance DJ and producer Armin van Buuren…” Nice work, Ms. Manno.

Showtime: At 3:45, van Buuren hit the stage before a massive and appreciative, if somewhat boozy, audience. Just like a club, just like a festival, the Armin/Armada/State of Trance fans were out en masse. You could see people hanging on the restraining fence clad in various t-shirts celebrating the DJ, the label or the show. There were official “Armin Intense” banners flying, plus plenty of homemade signs. Right off the bat, it looked like Preakness made the right call with this booking, which was done through Glow, a longtime D.C. area promoter.

After spinning crowd-favorites like his own “Ping Pong,” his new single “Another You” featuring Mr. Probz, plus remixes for Faithless’ “Insomnia” and Depeche Mode’s “Enjoy the Silence,” van Buuren finished with the Grammy-nominated hit, “This Is What It Feels Like.” NBC-TV caught the finale and showed a vast infield audience having the time of its life.

Still enjoying the post-gig afterglow, van Buuren and crew returned to the trailer and shared a drink with Glow principals and their friends, which included a pair of North American sportsmen – Tom Wilson of the NHL’s Washington Capitals and Shawne Merriman, a former NFL All-Pro linebacker, both big fans of dance music.

Soon everyone was summoned to a special place to view the race on the infield side of the finish line. All the horses were paraded in front of us, but we could all see the dark clouds looming in the near distance. Before the horses made it to the starting gate, the skies opened and sheets of rain began to fall. Not a word was said before everyone in the crew began sprinting to the nearest tent. We all arrived huffing and puffing, soaked to the bone, before someone realized that the artist trailer was another short sprint. So off we went, again…

With everyone finally under shelter and a decent-sized flatscreen before us all, we watched the messy race, which bore these results:

Win: American Pharaoh. The 4-5 favorite would grab the greater glory a few weeks later.
Place: Tale of Verve. The 30-1 longshot closed impressively and made some exotic wagerers very happy.
Show: Divining Rod. Touched by the Dutch DJ, the 12-1 horse also paid off some exotics handsomely.

Dortmund, the horse that anchored many of our exotic bets, finished a disappointing fourth. Nonetheless, it was a day that many of us won’t soon forget. And, of course, it served as another reminder of the impressive reach that the DJ culture has achieved in the mainstream.

Before heading back to BWI for his return flight to Europe, van Buuren was asked about his impressions of the day: “It was better than I expected because I thought it would be more of a general crowd, one that didn’t know who I was,” he said from a van surrounded by the exiting legions. “But I was very pleased to see that there were a lot of fans. And thank goodness it waited to rain until after the gig! It was a memorable experience and now I can say I’ve done Preakness.”

And The Preakness, with its unique daily double of racing and music, can say it’s been introduced to DJ culture. 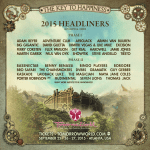 Lead Generation: DJs Relying on Word-Of-Mouth Referrals for a Majority of New Business Are Singing a New Tune