Miami – Once again, Bayfront Park got lit up by three days of electronic-music craziness in the form of Ultra Music Festival. With more than 165,000 fans descending upon downtown Miami this past March 24-26, UMF delivered 31 hours of music over 13 branded stages with some of the world’s top DJs, MCs, vocalists and electronic musicians. As usual, DJ Times was in the house…

Friday Highlights: On UMF’s Live Stage, KSHMR’s Middle-Eastern-flavored EDM, which featured cinematic interludes and traditional instrumentation (horns, strings, sitar, etc.), had fans at the jumping and shouting at the breaks and drops.

Over at the Carl Cox Megastructure, Joseph Capriati rocked the daylight revelers with 90 minutes of tough techno—rolling beats, rumbling basslines, soulful vocals and a few classics (including Derrick May’s “Strings of Life”). As the sun began to set, Marco Carola followed by ramping up the vibe with chuggy rhythms, thunderous kicks and buzzbomb effects—the massive hangar seemed to pulse with every modulation.
Meanwhile, on the Ultra Worldwide stage nearby, Netsky’s brand of melodic drum-n-bass had liquid funk fans gyrating to the propulsive rhythms and rubbery drops. On the massive mainstage, Alesso’s string of hits — “Under Control,” “Heroes (We Could Be)” and “Cool” – saw legions of fans singing every word, then agape at the stunning stage production.

At the Resistance Stage/Arcadia Spider, acrobats performed in-air routines to a frenetic d-n-b soundtrack, while hanging upside-down from the impressive structure—flumes of fire belching menacingly close. Afterward, Hot Since 82 settled things down with a 60-minute set of big, rolling, delicious grooves. Apparently, deep house soothes all.

Saturday Highlights: Day-Two festivities were affected by a steady rain which resulted in nasty accumulations of mud and water around the park. But a pair of disparate performances managed to transcend the sloppy atmosphere.

On the Live Stage, rough-tough, old-school, L.A. hip-hop defined much of the evening. Cypress Hill’s gloomy, bong-inspired hits (“Insane in the Brain,” “I Ain’t Going Out Like That”) loosened up the soggy fans, then Ice Cube hit the stage with a simulated fusillade of gunshots. After a video tribute to the late Lench Mob DJ Crazy Toones, who passed away this past January at the age 45, Cube delivered a first-round KO. First three numbers: N.W.A throwdowns “Straight Outta Compton,” “Gangsta, Gangsta” and “Fuck tha Police.” Fans young and old—certainly many who got hip to N.W.A via the hit 2015 bio pic—surged forward, heads bobbing, arms thrusting, unbowed by the downpour. Anybody wanna follow that?

Over on the mainstage, trance trio Above & Beyond—with its delicate, gorgeous melodies, euphoric peaks and relentless posi-vibes—served as a perfect counterpoint. (In fact, the instant the London-based group hit the stage, the rain slacked up, then stopped entirely—hmmm…) Playing before a video display of typed-out text messages offering reassurances, warm welcomes and friendship-building epigrams, A&B brought the hits old (OceanLab’s “Another Chance” and their mix of Moby’s “Porcelain”) and new (“Blue Sky Action” and “Balearic Balls”). As usual, their wildly dedicated fans reacted ecstatically, hugging each other with each new tune, some with tears in their eyes, loved-up and thrilled with each new musical moment. No gunshots from this stage. 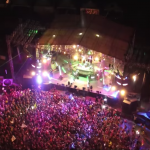 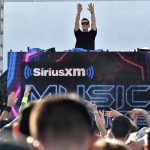