Fans of frenetic beats, four-deck DJ mixing, and a sweaty dancefloor will have all they can handle Friday, June 23, as the “Blood Sweat and Bass” tour comes to Webster Hall’s “Girls + Boys” party in New York City. Featuring ABDJ nominee Dieselboy and Canadian DJ/producer Downlink, the event will run from midnight to close.

As usual, DJ Times will be there to take votes from fans casting ballots for Dieselboy or other ABDJ nominees. One lucky fan who votes online or at an ABDJ tour stop will win a free trip for two to the America’s Best DJ Closing Party on Columbus Day weekend.

We caught up with the Brooklyn-based Dieselboy (aka Damian Higgins), one of America’s great drum-n-bass DJ/artists, to discuss the genre, the event, DJing and more.

Initially, what was it about drum-n-bass/jungle sounds that attracted you?
When I began DJing clubs and raves, the music that we now know as jungle/drum-n-bass did not exist. It wasn’t a sound or a genre at that point. What I was playing at the time—U.K. hardcore/breakbeat—was the music that eventually splintered off and evolved into d-n-b. What I liked about the music was the clever use of breakbeats and really cool techno sounds. The music just had this raw futuristic and underground energy—the same reason why I still love drum-n-bass today.

What was the scene like for you in the early ’90s when you began spinning underground events?
Back when I started in Pittsburgh, the scene was just super-underground. It attracted people with an underground mentality. It was challenging to find shows to go to—you had to run across a flyer or a poster. There was very little internet and no world wide web, so you had to call information lines—answering machines—for event info. People were really into the music and the DJs. To be a raver, you really had to work for it. It was the polar opposite of what you would consider “mainstream” in any way, shape or form – nothing like the way it is nowadays. I really enjoyed it. It felt real as fuck.

Going back to the ’90s, drum-n-bass fans are some of electronic music’s most dedicated—why is that? Is there something about the genre that makes people so dedicated?
Because drum-n-bass, at least in North America, is still underground. It is a challenging music. It isn’t casual music. It requires attention. So people that love it tend to be very passionate about it. There is also the mentality that drum-n-bass hasn’t gotten the respect it deserves, so fans are really intent on embracing it and promoting it as much as they can.

What’s your DJ-booth set-up now?
I like to play on four Pioneer DJ CDJ-2000s with a mixer, preferably a Pioneer. I like to use four decks because it allows me the freedom to layer a lot of stuff together, if I want to, as well always having stuff queued so I can keep my sets dense and fast-moving. You see a lot of “DJs” out there that have four decks onstage, but most don’t fully utilize that setup. They sort of bounce around between decks randomly. I use all of the equipment pretty intensely.

What’s the concept for the “Blood Sweat and Bass” tour?
Performance-wise, the concept is me and Downlink DJing our asses off and really trying to showcase a heavy dancefloor vibe. We both play on four decks and try to push the concept of technical mixing and layering. We put the focus on the skills, not the costumes, not the stage diving, not standing on the table, not the throwing of food products. Aesthetically, the “Blood Sweat and Bass” tour is all about “Gritty Grindhouse.” We like our graphics to reflect old movie posters and typography. It lends itself to the sound we are pushing.

What can fans expect from the Webster Hall stop on the tour?
All-out insanity! We’re going to bring the party vibe and we’re gonna make you sweat. 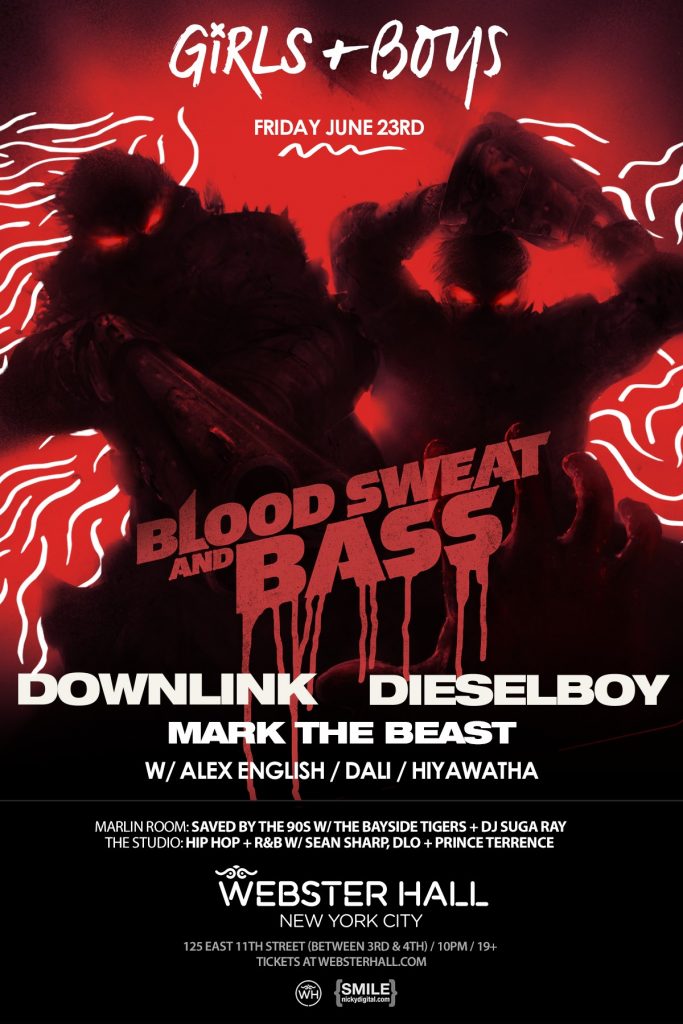