If actions speak louder than words, then inspired actions plus awesome music speaks volumes, with volume.

DJs have long realized the impact they can make by organizing parties for social good. And that’s just what talented jocks from Durham to San Diego will be doing at International Youth Day events Thursday, Aug. 10, thru Sunday Aug. 13, with DJ-driven/dance-music gatherings that put the spotlight on America’s mass-incarceration epidemic.

Electronic-music-grounded non-profit Give A Beat (GAB) and its partners have organized the series of events, which span 10 cities (and counting), with local artists as well as established headliners like Doc Martin, Marques Wyatt, LA Riots and Stacey “HOTWAXX” Hale getting folks on the floor and thinking about their brothers and sisters behind the walls.

Funds from the events will go into Give A Beat’s innovative mentoring program that connects previously incarcerated young people (ages 16 to 24) with mentors from the music community to help them build creative-driven futures. (DJ Times has been a proud participant in Give A Beat’s activities for the past two years.)

Since its founding in 2014, GAB has organized dozens of DJ workshops for youth, linked LA’s gangs-to-employment beacon program Homeboy Industries with Airbnb for Life-Changing Music experiences, and partnered with diverse sectors of the DJ community—from Movement Detroit to LA’s Tropical boat parties—to expand its mission and work on real prison reform. The United Nations’ International Youth Day (August 12) is an ideal date to remember the deep and destructive impact that America’s prison industry has on young people.

“There are so many people locked up in the U.S. right now: women, teens–most who have already been victimized, and are now separated from family,” says Give A Beat founder Lauren Segal. “But there is still a lot we can do. For one, we can just be there for people who’ve been through it by receiving them when they get out. This alone can make a world of difference.”

So whether you’re in Detroit, Chicago, Tucson, New Orleans, San Diego, Humboldt, San Francisco, or elsewhere, get out, spin sets, dance and be a part of the DJ-led change happening throughout the week. We DJs are known for our deep grooves, now we can also be known for deep actions and the long-lasting impact they can have on folks coming out of prison.

The complete list of confirmed International Youth Day events can be found here. 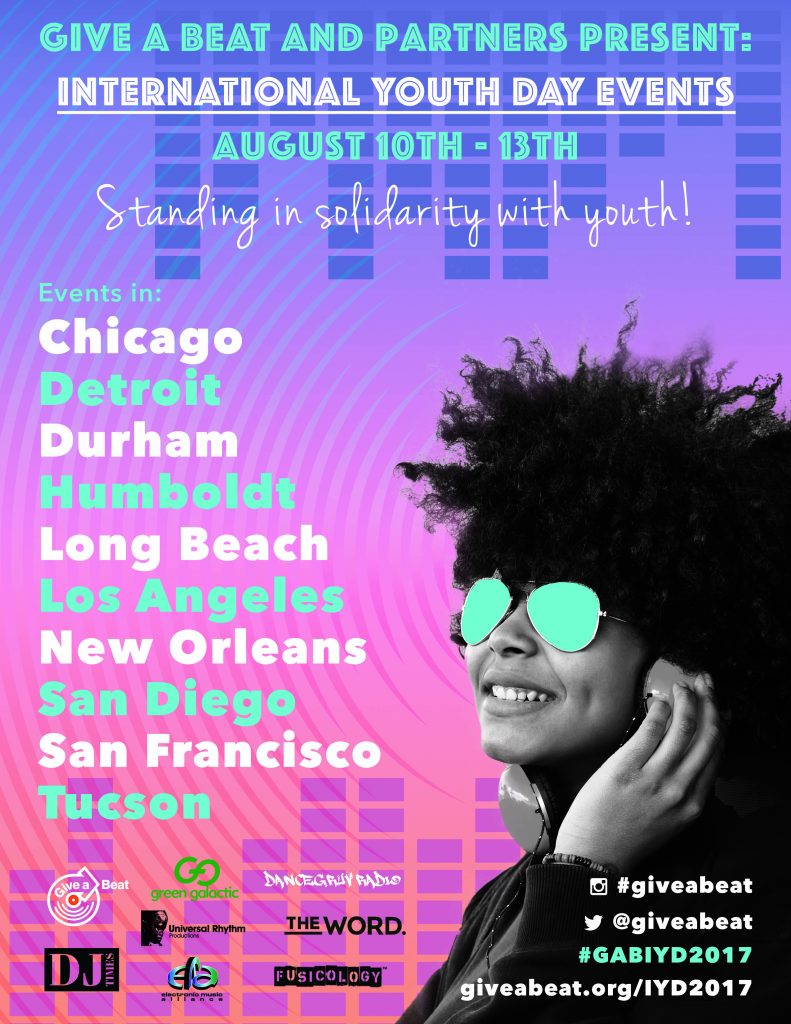