With the second annual Goldie Awards right around the corner, A-Trak has revealed the sixteen global contestants who will be battling for the crown of either the DJ Battle or Beat Battle competitions.

Competing in the DJ Battle will be YB (Yoshitaka Kurotsuchi) of Japan, 15-year-old K-Swizz of New Zealand, 2017 runner up Yuto of Japan, 11-year-old Brandan Duke the DJ of Canada, DJ Erick Jay of Brazil, and representing the US, IFTW, Javin and Matsu.

In the Beat Battle, Goldie Awards welcomes back 2017 champion HOLLY of Portugal who will be defending his title, Mctematico of Venezuela, Mawik of Mexico, Canada’s GoldenChild and from the US: Baseck, Lisa Vasquez, Nick Hook and Buck Rodgers. 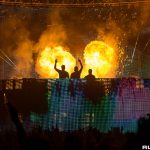