Providence, R.I. — After a weekend in Motown, it’s time for some therapy. Club Therapy, that is.

After trekking out to the birthplace of techno for a packed weekend in Detroit, MI at Movement Electronic Festival, America’s Best DJ Summer Tour Presented By Pioneer DJ & DJ Times is headed up to Providence, Rhode Island for a quick stop in New England.

On Saturday, May 30, we’ll be at Club Therapy for ABDJ nominee Boris’ performance at the venue. The New York City favorite will spend his blend of cutting-edge house to kick off the freshly christened summer season, and we’ll hold down a booth to collect votes to give attendees a chance to win a trip for two to our closing party later this year.

Saturday started off with a bang courtesy of a strong batch of performers. While Irish DJ/producer Mano Le Tough dropped a swelling set of chin-stroking house cuts—including ABDJ nominee Carl Craig’s extended 12-minute remix of Pleasure State’s “Electricity”—Brooklyn funksters Soul Clap got the Beatport stage bouncing with their genre-defying brand of Efunk cuts. At the Made in Detroit stage, Stacey Pullen delivered a soulful tech-house set with a diet of forceful beats, rubbery basslines and ominous vocals. Later on, Tuskegee (aka Seth Troxler and The Martinez Brothers) mixed super-fat grooves with a few techno squiggles at a mega-packed Beatport stage.

On Sunday, Josh Wink blitzed main-stage fans with a set that deftly transitioned from the deep, diva-led grooves of Josh One’s “Contemplation (King Britt Funke Remix)” to the classic electro vibes of Cybotron’s “Clear” and Afrika Bambaataa’s “Planet Rock.” Then he pulled out the big-beats guns, dropping The Chemical Brothers’ “Chemical Beats” and his own all-timer “Higher State of Consciousness.” Outside of the ABDJ nominees, the early evening one-two punch of Maya Jane Coles’ dark pulsing house into Hot Since 82’s raucous beats at the waterfront Beatport stage was one of the highlights of the weekend.

Dirtybird’s own trio of nominees—Justin Martin, J.Phlip, and label head honcho Claude VonStroke—skipped performing at the festival this year, but their presence in Detroit was certainly felt. After spending most of Sunday at the Dirtybird Pop-Up Shop at Urban Bean Co., the trio headed to the Fillmore for the Detroit installment of the label’s 10th Birthday celebration. The show sold-out show was packed to the brim with superfans from doors at 10 PM until the early morning hours. It was a fitting celebration on many levels: a homecoming for VonStroke, a birthday party for J.Phlip, and a prelude to a big summer that includes a new album and tour for Justin Martin. Those quirky, off-kilter basslines that the Dirtybird Players are known for were out in full force, but there were no shortage of undeniable bombs dropped by of the performers that night, including VonStroke’s new remix of Rihanna’s “Bitch Better Have My Money.”

By Monday, it was apparent that attendees’ dance steps were showing the ever-so-slight signs of slowing down, with a full weekend of parties, afterparties, and after-afterparties having caught up with them. The furiously aggressive speed of DJ Godfather’s set on the Red Bull Music Academy stage did well to rouse anyone still groggy, with his breaks-centric take on G-House inspiring circles of shuffling, breakdancing, and—yes—twerking.

In recent years at Movement and at its afterparties, Maceo Plex has become a can’t-miss attraction and, indeed, his Monday set saw his trademark crunchy beats meld well with groovier moments. Later on the big stage, GRiZ unleashed enough rattling bass to carry throughout the plaza—his set mixing horn hits and funky moments with whopping dubstep stompers.

MK took the Made in Detroit stage deep with big, bulging basslines and hip-shaking house beats, then Hi-Tek Soul (Kevin Saunderson and Derrick May) returned to the festival as conquering heroes with their big, rolling techno grooves, reminding everyone where it all began.

During all of this, DJ Times TV caught up with a smattering of the nominees playing the festival and its accompanying afterparties. Stay tuned throughout the summer to see what Soul Clap, Stacey Pullen, Claude VonStroke, The Martinez Brothers, J.Phlip, and Justin Martin had to say about being nominated. 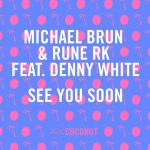 Michael Brun Teams with Rune RK for ‘See You Soon’